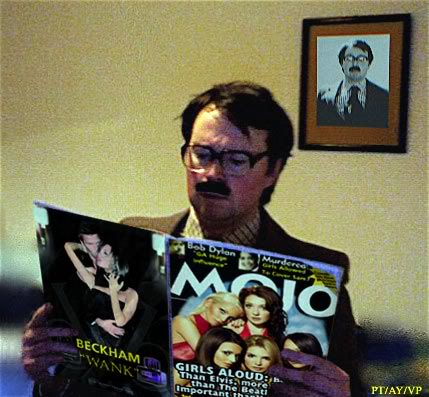 In a new regular column Cheambeat Communications Radio presenter Oliver Dogwood joins us to investigate all that is wrong with pop. This months conundrum is ..“the problem with Girls Aloud”....over to you Dogwood..

Now, for those of you that know me, you will be aware that my arch nemesis is a feller called Wilmot-Bwona.  He’s the Chief Exec down at the local Civic Centre, also the self-appointed Diversity Champion and regular bloody PC Tsar.  Here’s the feller that suggested that ‘Christmas was getting a bit passé’ and ‘wouldn’t it be more appropriate to embrace the multi-cultural facets of the local community and celebrate Kwanza instead?’

Anyway, in my role as chair of the Stoneleigh Allotment Society I am often called in to account for events on the Civic allotment scene.  This also gets me invites to all kind of local Civic do’s including the afore-mentioned Kwanza do (which I declined, I don’t do all that white man pretending to be black nonsense – I leave that to Gordon Sumner, he does pretentious patronisation to a tee that one).  But the one that’s really got my David Jacobs is this latest invite that came through the door this morning – it reads thus:

Dear Dogwood (the ‘Dogwood’ bit has been hand written)

You are cordially invited to my GIRLS ALOUD party.  The theme for the party is GIRLS ALOUD and you must come dressed up either as a member of GIRLS ALOUD or Simon Cowell, Louis Walsh or Ashley Cole.  The music for the night will be GIRLS ALOUD and we will be eating food that has only been officially endorsed by GIRLS ALOUD or that which does not endanger the livelihood of farmers on the Serengeti.  No Animal Furs aloud (LOL!) or leather shoes.

That LOL- bit got me puzzling and then I found out that its youth Jamaican txt patios and so I drew up my hands in surrender and walked slowly away.

Now suffice to say that I don’t do Girls Aloud, in block capitals or otherwise.  The idea of spending a night listening to their caterwauling about tubes on the underground and whatever other guff they spout thanks to their song-writing team is like being asked to go out on patrol in Stalingrad on the coldest night of the winter wearing a flimsy cheesecloth shirt (which I don’t do) and armed with a spatula in an area teeming with Germans.  No way, Johnny Briggs.

This got me thinking – why a GIRLS ALOUD themed night?  Why not a Joni Mitchell, Siouxsie Sioux or PJ Harvey party?  They arguably have a more compelling body of work to fall back on?  Better still, why not a Lush party? Miki Berenyi and Emma Anderson versus Cheryl Crone and Sandra Hardface – no competition.  So I rang up Wilmot-Bwona’s PA and made some enquiries as follows:

“Why has Wilmot-Bwona chosen a bunch of bloody karaoke lightweights, chosen by the demon Cowell/Walsh axis?  Why not someone who is actually a bonafide singer-songwriter?  Why not a Johnny Cash night? I’ve got a black pair of Farahs”

To which the reply received was:

“Hmmm, can I get Mr Wilmot-Bwona to give you a ring?  Will you be coming incidentally?”

Anyway, a while later Wilmot-Bwona rang:

“Ah Dogwood sweetheart, thought I’d give you a tinkle to put you in the picture viz a viz my GIRLS ALOUD party (this is how he speaks)……”

I won’t bore you with the details but he started to enthuse about how GA had ‘transposed the barriers between the former boundaries of artificial, manufactured pop and credible song writing’ how ‘the innate snobbery of the broadsheet music critic had been challenged by their urban sassiness, their agility, their wit, their ability to capture the zeitgeist’ how ‘the days of serious music were over, manufactured pop was the new indie and GA were the new Oasis – voice of the people’. None of this Guardian supplement

claptrap I neither understood nor swallowed.  He finished off with this gem:
“Dogwood, get with the programme, GA are Wonky Pop – pop with attitude!”

I replied by saying:
“Are you sure you don’t mean wanky pop?”

At which point the phone went dead.

I don’t buy all this revisionist nonsense about manufactured pop.  I remember Flintlock (google it children).  I also remember a time when the Bee Gees were three blokes – one who looked like a lion, one with a thinning pate and one who looked like henna era Quentin Crisp – who sang annoying songs in ludicrous falsetto voices.  No-one took them seriously.  However, now they are song-writing geniuses apparently.  Try telling that to the lads down the Crown twenty years ago.

The same disease affects what you would consider right-minded folk (i.e. those with an education).  There’s a certain type out there that if you tell them that men look good in crocs, they will go and buy a pair for every day of the week or that African sculptures are a must for the bathroom so that every time you have a Tom Tit you end up being stared at by some juju effigy.  These are sorts that used to get invited to Jamie Oliver’s Naked Chef dinner thingies and are now all media types attending Nigella’s sumptuous Christmas banquets.  And of course, what are they discussing at said banquets?  Yes, that’s right – how they’ve liked GA from the very start.  How they were at the first ‘gig’ and the first album ranks alongside ‘The Clash’ as a contemporary record of social commentary.

I’m afraid that anything orchestrated by the music industry SS, aka Cowell and Walsh, deserves resisting if only because it has removed choice from the every day consumer experience.  You don’t want to chance buying an album from some bunch of flaky Americans who call themselves Fleet Foxes, not when the new X-Factor and gaggle of X-Factor near-misses swamp the market with their sure-fire crowd pleasing sub-Robbie Williams’ cak.  Let me tell you something: Cowell and Walsh mistrust YOU, the real music fan, simply because they don’t understand you.  They want to marginalise you

because you raise awkward points, cite bands and artists they’ve never heard of (for them Razorshite are a cutting edge Prog-Rock outfit), don’t like the music that ‘normal people’ like. If you listen to the X-Factor auditions you would think that the world’s total musical output revolves around about 40-50 songs – normally sung by the likes of Watney Houston, Robbie Walliams, Brittany Ferry and Take This.  Anything beyond their limited ken is dismissed as ‘zany’ and ‘mad’.  They are successful in their quest because 90% of people in this country (the ‘normal people’) think like-wise.  There are countless pubs where the real Phil Mitchell’s will sink lager and sing-along to GA quite happily but if, say, Portishead came on the jukebox then they would transform into an aggressive ape demanding to know ‘what poof put this shit on?’

So, there is a medical reason for GA, it subdues the latent aggressive tendency of the bald-headed gorillas.  It’s just as Orwell predicted, if you feed the Proles with the sort of saccharine junk that keeps them happy then they’ll be content to fight amongst themselves and allow Big Brother to get on with the real work.

There’s nothing ‘ironic’ or ‘post modern’ or ‘pure pop’ about GA.  There’s the one married to Cashley Cole, the Geordie one who mouths off ‘hadaway and shite man’. There’s Sarah blonde one, who seems to be the one who likes the hooch.  The Dana one from Ireland .  The Silent ginger scouse one and the other one.  That’s all there is to it.  Nothing more.  Show’s over folks.  They’re shite.

The wisdom of Girls Aloud

“I Predict A Riot”-  GA-Karaoke

( and I thought the Kaisers where rubbish!  This cover redefines the word “cringeworthy!”)

10 thoughts on “Dogwood Investigates ..The Trouble With Girls Aloud”