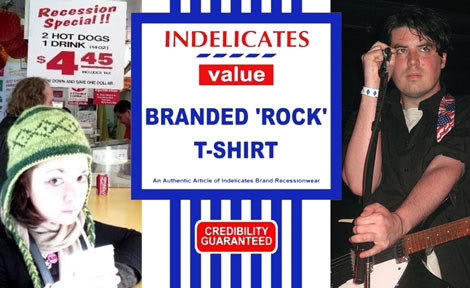 “The Recession Song” – An Explanatory Note.

I was talking to a friend the other day. While this was an unusual enough occurrence that it deserves its own sentence, it should come as no surprise to anyone within the noughties indie clusterf*ck that he’s a friend out of some band and that most of the conversation concerned some other bands and the narrow range of music that they make. The conversation turned, as they will when I’m steering them, to the Brighton Institute of Modern Music and the usual debate as to whether it falls squarely into the set of evil things.

BIMM is, like the Brit school, a place where young people go to learn how to be popstars. It has likely produced more popstars than your school. I can’t speak with authority about the syllabus but I imagine they are taught to grow out the curly hair they were always bullied for in order to brand their silhouettes effectively; that they are instructed to affect adenoidally half-Australian/half-mockney vocal styles in order to generate an easily identifiable sonic profile for radio; that they are encouraged to fuck each other and talk about it; that they are encouraged to pick band names that are easy on graphic designers, vaguely reference David Bowie and stand in direct contradiction to what their bands are actually like. The ‘Kooks’, say, for example.

So anyway, I’m halfway through my usual tirade about BIMM, building up to my sexy rhetorical flourish where I slag off the Kooks, when this friend does something unexpected: he defends the f*ckers (BIMM, not the Kooks – he is my friend after all).

It turns out that among his many sacked drummers was a BIMM alumnus who set him straight about a few things. It turns out that a BIMM education is jolly hard work. That the stars it produces are among the lesser of its talents. That it offers a route into the industry for the underprivileged. That it is, on balance less evil than one might assume. And, like a member of the liberal Intelligentsia confronted with the fact that Saddam Hussein used to make naked political prisoners sit on sharpened metal spikes, I am sent at once into a conversational tailspin, scrabbling around for a reason why I’m still right.

I am right though, and here’s why:

Systems, by their nature, exclude. No matter how broad a system of education seeks to be, no matter what it encompasses, it will keep at its heart a notion of the best way to go about something. By definition, this will exclude other options. An educational system involves a power imbalance between the teacher and taught. This power imbalance interrupts the flow of communication. To communicate the fact that they have learned, pupils must, in some sense, achieve goals set by teachers. If the process of learning is goal orientated, then those who accept that hard work within the definitions of a system is their best route to success will succeed. If such people succeed, they will further promote the assumptions that were the basis for their success and more such people will prosper. Thus, the hegemony is established.

The system, ultimately operates on a self-perpetuating bell-curve, each generation adding ever-more skewed data to the definitions of normal, good, best. A graph plotting success against conformity to expected norms will take the shape of an ever steeper parabolic hill with the mediocre tea party of the average perched atop it. Perhaps it excludes the very bad. Perhaps, the very good. It certainly excludes the odd, the unexpected and the outlier.

And you know what? that would all be fine if the system was designed to identify and promote suitable cabinet ministers or plumbers. In these (as most) fields, the benefits of odd brilliance are outweighed by the dangers of odd dreadfulness. An odd plumber might increase the efficiency of your pipes and save you £20 a year in heating bills, but he might also plumb your CD player into your bath and kill you. An odd cabinet minister might usher in a golden age of liberty and enquiry, but he might as soon gas you for failing to live up to the standards of his utopia. Mediocrity has benefits.

But when it comes to art – music – the downsides are irrelevant to anything while the upsides are vast and bounteous. An odd musician might well make a very very bad album; but he might make an inspirational heavy metal masterpiece that forms the basis for a future society based on being excellent to each other. Consequently, the mediocrity-benefiting bellcurve that can’t help but be created by BIMM’s success is just damaging, there is no upside for anyone except the Kooks.

Because music is built on freaks and poor people. The old established sectarian lines between ‘artschool’ and working class musicians disguise this broader truth: that good music is made by outcasts. People who don’t fit on the bellcurve. Maybe because they are poor and socially immobile and hate it. Maybe because they are too weird to do anything else. Maybe for reasons I can’t yet imagine. People who say f*ck it, what else are we going to do? It cannot be a profession. It cannot be professional. It cannot be a career – it’s for people who don’t want a career, for whom fun is secondary, who have lost hope, who obey no fashion.

In a time of plenty, when struggle seems quaint and life is a series of consolidating gestures BIMM and it’s ilk do nothing but harm as they leave handprints and signatures along the good intentioned pathway to entropic, featureless hell. They serve and regenerate the established. The money keeps them strong. Like the traders who see their share prices rising higher and higher and know that it can only cause harm to point out that they have come adrift from reality, the fact of financial success ensures that no questioning of the system’s assumptions can be taken seriously. It is boomtown thinking.

Now, however, we are in a recession and the gold is running thin. It has yet to bite. Even today, parents buy their children guitars and open BIMM prospectuses and see that yes, this music thing is a viable career choice for their moptopped little dullard. Still the bellcurve steepens as the career paths of the boomtown economy remain trodden. Still Icarus ascends.

But the fact looms that there is now no money in it. The Music industry was on its knees already and now they can pretend no hope. The y axis of our graph is starting to look shaky as the definitions used to measure ‘success’ start to crumble. When it breaks, there will be no future for mediocrity hill and those on higher ground will have nowhere to fall but an x axis populated by very irritated freaks.

The really important thing here is that I was right. BIMM is definitely evil. But, that said, it is not unconquerably so. Everything is changing, print is dying, the idea of selling generic round objects with data on looks increasingly absurd, the idea of companies standing between musician and audience taking half the money more so. The recession will see a slashing and burning of the suffocating foliage to make way for new shoots. I feel guilty for saying it, because outside in reality there will be suffering and misery and panic – but here, in music, in art – thank f*ck for the f*cking recession indeed.