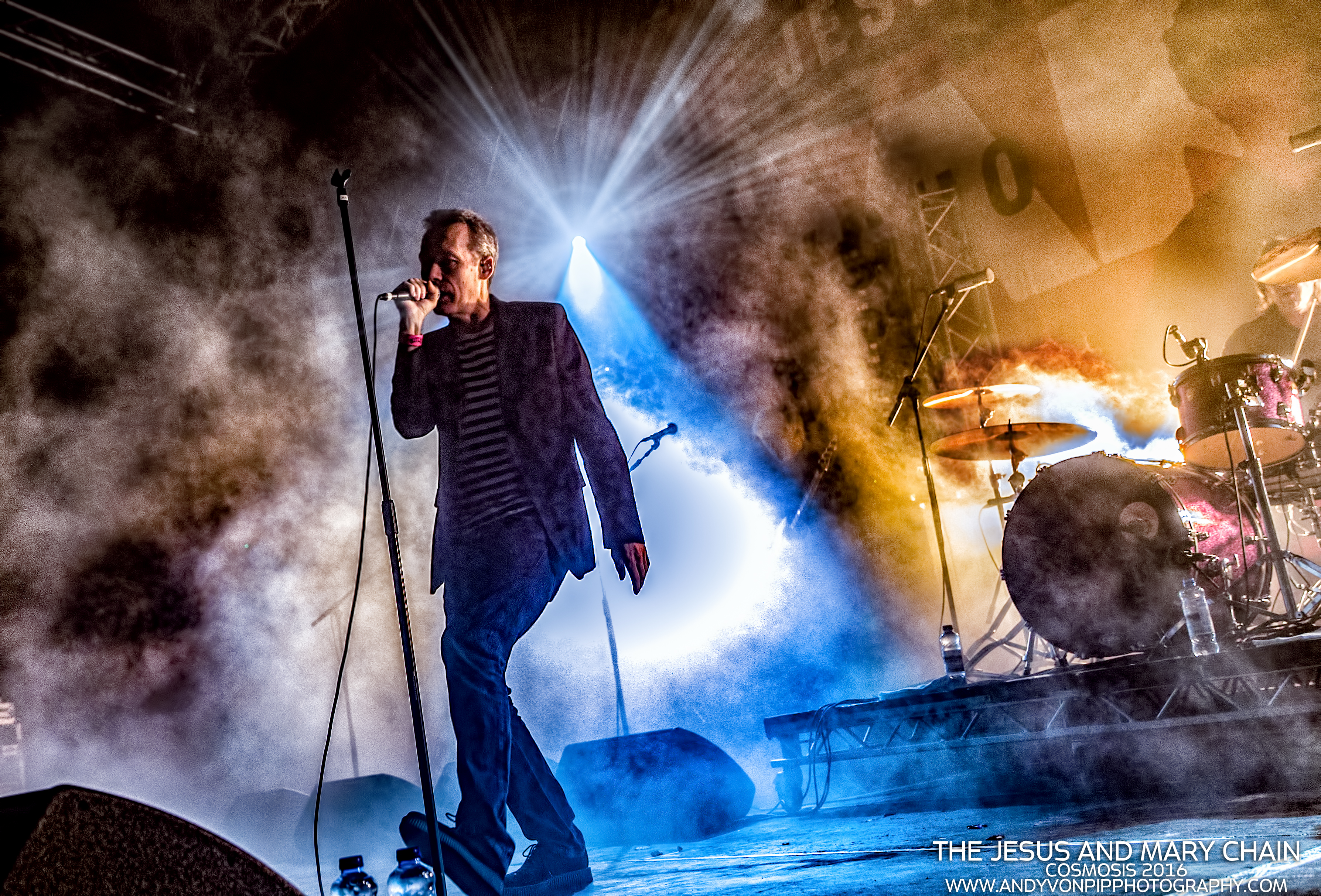 The stakes were high as the organisers of this years Cosmosis Festival decided to go for broke moving the entire set-up from the, ahem, logistically challenging Antwerp Mansion(which let’s be honest had more than an air of Charlie Manson than a Mansion) to Manchester’s Victoria Warehouse.  Last year’s festival was undoubtedly ambitious yet technical issues meant that rather like Harold Lloyd teetering on a ledge, it often veered between triumph and disaster. It’s saving grace was the quality of the bands booked, which were a real testament to the organisers,  passion, ambition and discerning  taste.

This year’s Cosmosis Festival boasted an incredible line-up featuring the Jesus And Mary Chain, The Brian Jonestown Massacre, The Raveonettes,  Uncle Acid And The Deadbeats and many more… the addition of artists such as PINS, Sleaford Mods and Wire also took the emphasis away from the purist psychedelia of say Liverpool’s Psych Fest to create a more rounded alternative music and arts festival. It was in musical terms, a triumph featuring more outrageous wig-outs than Donald Trump’s dressing room.

As with any major event, there will always be grumbles, for example, the drink token system is universally loathed by punters, as are the ludicrous markup prices for cans of piss-weak Fosters – (a definite case of taking the Fosters.)  The bellicose attitude of the security team was the complete antithesis of the sort of vibe any festival aims to create, with many channelling the spirit of Orcs. They were, in general, uninterested and unhelpful, it’s strange how a hi-vis vest can so often bring out the inner fascist. The lack of signposting within the venue meant it was initially a little tricky orientating yourself  to labyrinth-like warehouse’s layout – But once the music started none of this really mattered.

Lola Colt were sweeping, majestic and quite breathtaking , chiming guitars, hypnotic beats entwined with  Danish singer Gun Overbye’s brooding  imperious Patti Smith-tinged vocals.  Uncle Acid And The Deadbeats sounded huge, their mix of murderous, bludgeoning Hammer Horror guitar mayhem, dark metal and psychedelia created a foreboding atmosphere in what was  ultimately a hugely uplifting set.  Art-punk legends  Wire sounded as fresh and as innovative as they did when they first burst onto the scene  in 1976, all jagged guitars and jerky angular shapes whilst Danish duo The Raveonettes gave a master class in perfect pop imbued with a gorgeous sonic thunder and once again left us baffled as to why they’ve never really quite broke through to the mainstream. Local girl gang PINS demonstrated  why despite the somewhat divided critical response to their last album ‘Wild Nights’ they remain one of the most exciting live young bands around.

What initially appeared to be the festivals wild card Sleaford Mods, who are to psychedelia what Michael Buble is to death metal, were bizarre yet mesmerising and a welcome break from explosive guitar wig outs. People have said to truly “get” Sleaford Mods you have to see them live, and admittedly, based on their recorded work we have been a tad baffled by their appeal, so much so that we initially thought their sound check was part of their act! Yet as a live proposition it all starts to make perfect sense. Initially, it felt not unlike like you’re sat next to the gobby whacko on the bus, but after a while, you realise that the anger and bile is entirely justified. And it’s at that point you start to discover the insight and humour, sprinkled with a touch of pathos but very little bathos (or indeed any other musketeer) within Jason Williamson’s intense stream of consciousness delivery. It was certainly a compelling set which won over many doubters (including us.)

One of the outstanding sets of the entire festival arrived in the leather-clad form of Saint Agnes, who were formed by Kitty from Lola Colt and Jon from the Lost Souls Club  back in 2013.  Their first release ‘Old Bone Rattle’  first caught our attention with their sexy cinematic frontier psyche noir, and their set pulsed with an electrically charged chemistry the duo exuded  as they blended elements of psych, rock, blues and grunge to deliver a huge performance.

The Brian Jones Town Massacre were once more renown for their erratic, self-destructive behaviour than their music but these days the band seem calmer and more at peace with the world and their set was stunning.  They appear to have reached a new peak in which their restless creativity and undoubted technical ability now work in perfect harmony …. a set perhaps you might think couldn’t be topped by any band. But then The Jesus And Mary Chain  aren’t just any band … and they took proceedings to even greater heights.

Like The Brian Jones Town Massacre, the Mary Chain’s reputation for fighting and drinking has often grabbed press attention ahead of the music. But with the Reid brothers off the sauce and generally in agreement about how the Mary Chain should proceed, the really have never sounded, tighter and more in harmony as a unit. There will be those who still wistfully wish Jim and William Reid were still those shy but surly chaotic leather clad waifs, but that’s probably got more to do with nostalgia than the actual quality of their live shows. When you hear Jim sing ‘I wanna die just like Jesus Christ / I wanna die on a bed of spikes’  as if his life depended on it, when William tears sonic thunderbolts from his guitar on ‘Reverence’, or the  band  gloriously detonate on the likes of ‘Snakedriver’, ‘Never Understand’  and ‘Far Gone And Out’ you realise you’re actually in the presence not of Jesus, but of God. ;)

Commentators on social media have been directly making comparisons between Cosmosis and the Liverpool Psych Fest which is somewhat unfair.  Liverpool adopts a rather more rigid adherence to the Psychedelic genre (hence the festival name) and has a wonderful base at Liverpool’s Camp and Furnace, a venue blessed with a layout that really lends itself to such an event.  Cosmosis, on the other hand, seems to be  positioning itself as a festival of alternative music rather than a  psych fest per se.   Liverpool’s might feel less chaotic with a warmer vibe, but for us,  Cosmosis 2016 had a far superior line-up which is testiment to the promoters willingness to take a gamble, dream big and take things to the next level. Roll on 2017.