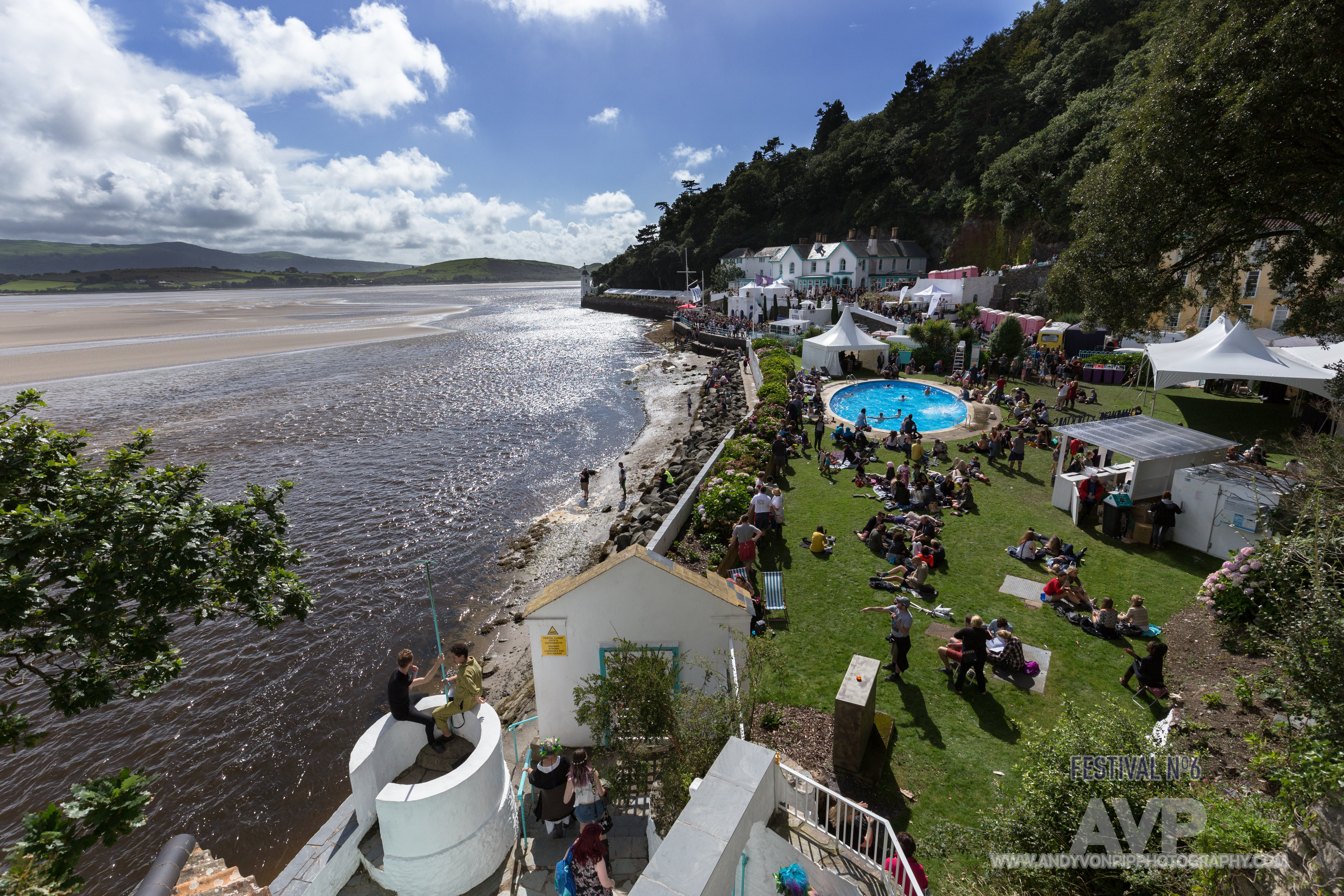 It would be disingenuous to reflect on this year’s Festival No.6 without using the words “parking debacle” on more than one occasion.
Billed as “a festival unlike any other “it certainly provided a unique customer experience if getting towed out of a quagmire by a tractor is viewed as a major draw. The weather certainly put a damper on proceedings and led to a flat atmosphere after being teased by glorious sunshine on the opening morning of this year’s event. Of course, this is Wales in September so inclement weather is not entirely an unexpected entity. What perhaps was unforgivable for many of the attendees who had paid top dollar for a ’boutique festival experience’ was the lack of information and an all-pervading sense of utter cluelessness when the bad weather hit.

We were lucky, we were staying off site and exited the festival early on Saturday night. As we arrived at the park and ride the writing was already on the wall – writ large in huge sticky muddy letters ‘Leave while you still can...”  The parking area was already beginning to resemble a large blancmange made from freshly acquired diarrhoea, luckily we were parked pretty near the exit and as the vast majority of festival goers were still enduring/enjoying a headline set from Hot Chip there was very little traffic. After reversing out and splattering our own vehicle with so much mud it looked like it had been shat on by an incontinent Pterodactyl we were towed from the field, with a minimum fuss by a very helpful, amiable driver who stated prophetically “Well that’s my first, but possibly not my last rescue of the festival.” I wonder if he’s still there now, knee deep in shite and occasionally thinks of us , almost whimsically, reflecting back on a simpler, more innocent time.  Some were not so lucky and had to endure a twelve-hour wait to be towed out , suffered damage to their vehicles and some were even evacuated to a local sports centre.

So what of the actual event ? Well admittedly this year’s line didn’t look the strongest, but Festival No 6 can be as much about the overall experience as it is the music . Its major selling point is, of course, its environment – the beautiful, surreal faux Italian neoclassical village of Portmeirion. Yet this year, things seemed off from the get-go. The village itself appeared horribly cramped at times, worse still, when performances were cancelled as the bad weather hit and people attempted to seek shelter and entertainment. It became apparent that venues within the village were way too small to cater for that amount of people.

But all was not bad, there were highlights, for example, the set of the festival came from Gwenno, one of the few artists who managed to form a genuine connection with the audience. Welsh dystopian science fiction retro-futuristic pop has surely never sounded this uplifting. Eagulls appeared in a rather odd early afternoon slot, and their brooding menace would certainly have been better served later on in the day as the storm clouds gathered. Their frontman George Mitchell was suitably grumpy and agitated before the set as he mumbled about technical issues, and swigged from a bottle of wine,  but it didn’t affect their blisteringly moody, imperious set.

Disappointingly, a number of bands we’d planned on catching had been cancelled due to health and safety issues, this included the wonderful Pumarosa who had been on our must-see list. Sadly Blossoms did turn up , but looked perfectly at home on the big stage. Their debut album is inoffensive enough to do well,  awash as it is with radio-friendly indie-pop songs as they plot to swipe Alex Turner’s “Indeh”  crown whilst he’s spending far too much time showboating, as a weird sort of post-stroke constipated Elvis in the thrall of with a velour-clad wank spangle from Heswall.. John Cooper Clarke looking like a cross between the Child Catcher and Edward Scissorhands’ granddad on the beautiful Central Piazza was a barbed and acid-tongued delight proving that age hasn’t dimmed his acerbic wit, sharp intellect or ability to deliver lines like a bony knuckle sandwich to the face.

Elsewhere Róisín Murphy stoically braved the elements with a wonderfully eclectic, slightly barking performance, as strong winds and driving rain threatened to cut her set short. There aren’t many performers who can utilise a brolly with such style and at times she looked not unlike an avant-garde Mary Poppins at a Freddie Mercury tribute show. But she delivered an uplifting and accomplished set, taking on the forces of nature, by becoming one ;)

Of the up and coming bands, Estrons stood out and once again delivered a compelling set full of edgy energy, agitated guitars, melody and passion whilst Aurora’s ethereal pop had the crowd in raptures.

The baffling popularity of The Kaiser Chiefs seems to remain undiminished and if derivative energetic and ultimately soulless faux-indie-kack is your thing, then they certainly delivered in spades. How chief Kaiser chump, and indie’s very own Mr Tumble Ricky Wilson can bellow ‘Everything Is Average Nowadays’ without the slightest trace of irony remains one of life’s great mysteries .

The Festival was rapidly becoming a damp squib in more ways than one due to cancellations, dreadful weather and a complete absence of communication , for example, we had been told the Kazimier’s  live show and parade had been cancelled ( it hadn’t), line up changes and announcements were pretty much exclusively done via the Festival App, in an area where the majority of smartphone users could not get a signal. Duh! The location, which is the festival’s selling point was rapidly becoming it’s Achilles heel.

In conclusion, sadly this year’s Festival No6 will be forever defined by the park and (slide) ride debacle meaning that our own overall highlight was actually extracting ourselves from the site a day early, without (hopefully) any lasting damage to our vehicle. 2016 certainly looks like a tipping point and it wasn’t purely down to bad luck with the weather, it was hampered by what appeared to be a distinct absence of having any sort of coherent “plan B.” If the organisers fail to take on board the many criticisms that have been levelled at them via social media and do not seek to address the issues that blighted this year’s festival, one wonders if it can continue in its current format?  As somebody who finds it difficult to organise a dinner party, we can only begin to imagine how challenging the logistics of putting on a festival of this nature are, and we can only hope that the festival takes stock of what went wrong this time around. Portmeirion deserves a quality arts and culture festival, it’s an amazing place, and it could have worked this year with better organisation and communication and crucially a backup plan,  perhaps a scaling back is required to move forward?

As we write there are still apparently vehicles trapped in the quagmire that was once a field, and local councillors  are demanding an inquiry into how a park-and-ride site was ever put on a known flood plain. The Independent newspaper once described Festival No 6 thus – “the most bijou location of any music event I’ve ever attended,”  this year they could perhaps replace the word ‘bijou’ with ‘bayou.’