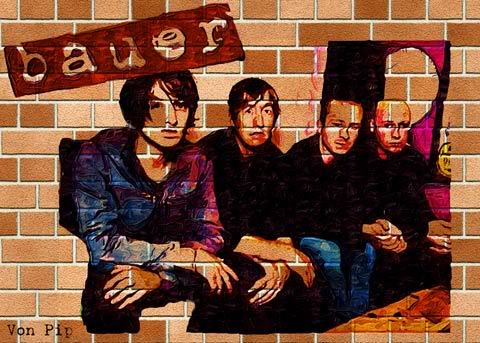 Manchester based band Bauer have everything in their arsenal to be up there with the likes of Radiohead, Keane and Snow Patrol. They’ve got guitarist, Mikey, with poster boy looks whose playing style pisses on most of current NME “Stadium Indie Identikit Mob.” They have a lead singer in Greg, whose soaring vocals make many of his contemporaries sound like they gargle razor blades every morning, and of course they’ve got the songs that knock most other bands into the proverbial cocked hat.

Their sound is big and anthemic, but without being impersonal or cynical. It conjures up past Mancunian greats such as the Smiths, The Duratti Column, Magazine, Puressence and Joy Division/New Order but with a hint of the modern pop sensibilities of Keane and Ian Broudie. Listen to songs like “Connected” “Don’t You Move” or “Gone” and get swept away by glorious soundscape that is Bauer.

So What’s It All About ? We spoke to Bauer at a top secret location to find out more…

16:54-VP: Ok so what’s the Bauer story, how did you all meet, what was the name change all about?

16:56 -Bauer: Ok Bauer, Bauer…we all saw each other one day in a canteen and just decided “I know, let’s form a band.” – yeah, we had a different name once upon a time. But a major record label made us change it. Yes, we’ve had our dealings with the devil.

17:00-VP: You’ve released a fantastic EP on Naz recordings and are now gearing up to release your official debut single. What’s the news? Will you be touring?

17:01-Bauer: We’ll be doing a couple of single launch nights in Manchester and London…as for touring. It seems that booking agents have been sleeping…WAKE UP!

17:02-VP: In your time you’ve played with some pretty big bands such as The Ordinary Boys, Snow Patrol, and Brendan Benson. What have been your highlights thus far?

17:03-Bauer: Putting on our own nights are always the most enjoyable for us – it’s great because we can pick the support bands and have a choice in what songs get played in-between acts. We like to have control!

17:05-Bauer: Same as it always is. Lots of bands trying to sound like whatever the NME is writing about at the moment and not taking their own musical path.

17:06-VP: You’ve mentioned in your prodigious blogging that you feel you don’t quite fit into the current Manchester scene. Could you expand on that?

17:07-Bauer: We’ve never fitted in with the Manchester scene – pretty much because, although we’re roughly based in Manchester. We’re not really a Manchester band (whisper it) I was born in Denmark, Greg and Neil are very much Lancashire…with Lee being the only bona fide Manc…So many recent “next big thing” bands from the Manchester scene have split up because they haven’t got the stomach for it…you will find that we have always had the same game plan and we will stick to it.

17:09-VP: My space? Saviour of Indie music or the fruit of Lucifer’s own satanic gonads?

17:11-VP: Which bands/artists have been the major influences on you all ?

17:15-Bauer: We’re only thinking about the next 2 singles for the time being. The music industry is changing so fast, we’ve found that within the release of our E.P from last year and next single package, we’ve already put out enough songs to make up an album…ask Ash about their next album ;)