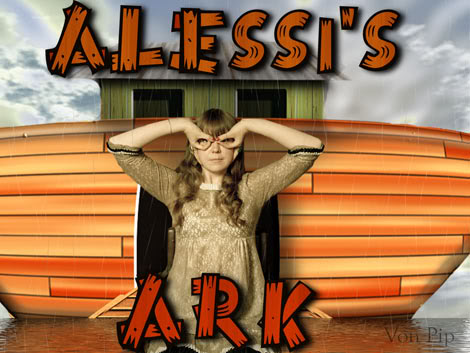 Initially you may get the impression that Alessi (of Alessi’s Ark) resides within a giant toadstool in the middle of an enchanted forest in which she routinely communes with imps, woodland sprites and all manner of magical creatures.  Admittedly she could be perceived as a quirky mix of Emily from “Bagpuss” and Mazzy Star’s Hope Sandoval, with varying shades of Kate Bush and Regina Spektor thrown in for good measure.  Now this might have some of you wringing your hands in despair shouting “No! Not another kooky female singer”, but fear not, for upon listening to her debut album “Notes From the Treehouse” any qualms should be quickly dispelled.  The album occupies that twilight world between childhood and responsibility, where a sense of wonder, magic and possibility has not yet been devoured by the cynicism that comes with age.

The album itself is an incredibly mature affair which shimmers with beauty and is solely the product of London singer and guitarist Alessi Laurent-Marke’s fertile imagination. She left school at 16 to take her chances within the pop world, fully supported by her parents, with the proviso that she should return to full-time education if nothing happened within a year. Fortunately a collection of songs written on her computer caught the attention of a discerning soul at Virgin Records who pretty much signed her up on the spot. ‘It has all happened so quickly,’ she says. “I sang in the school choir but that was about it. I didn’t even know the names of any chords.’ We had a chat with Alessi and were somewhat taken aback that she didn’t arrive for the interview astride a magical unicorn.

VP: Is it true that you’d never really considered a career in music until you took your music exams at school?

ALESSI: I had been playing drums in the school bands up until the music exams but I hadn’t really thought of making music of my own.

VP:  And were your parents  supportive of your decision to leave school and pursue a musical career? Are they big music fans too?

ALESSI: My parents are very supportive of my sister and I and all that we’re interested in. Without their encouragement and love for music, things would be very different. Hats off to the folks!

VP: What sort of music do you think has been a major influence on you?

ALESSI: I like listening to all sorts so I’m not sure if any one type has influenced me especially ;  of the older  music I listen to Graham Nash, David Bowie,  Tyrannosaurus Rex, Sam Cooke, Muddy Waters and of the newer ; Magic Magic, Neva Dinova, Elliott Smith, Coal Beautiere…

VP:  Your debut album “Notes From the Treehouse” is due out soon; did cult Indie darlings “Bright Eyes” provide the backing on the album? What’s the official release date?

ALESSI: The album is all done and dusted and due out April 6th. There are many wonderful musicians that perform on the record but my right (and left) hand men were Mike Mogis and Nate Walcott of Bright Eyes.

VP: Your song writing style? Would you say its, personal, or do you treat as kind of, writing a kind of fictional musical story?

ALESSI: Every song is a little bit different and has travelled in from a different part of the brain. There’s always truth, whether it’s my own or imaginary.

VP:  What have been your favourite albums of the last year?

ALESSI: “Swim’ by The Whispertown 2000 and Magic Magic’s self titled album.

VP: Which singer/band do you most admire at this moment in time and why?

ALESSI: There are quite a few bands that I take my hat off to – one in particular is Mumford & Sons, they are very, very kind and behold so many beautiful melodies in their brains.

ALESSI: I’m not quite sure just yet, I think there are shows ahead and I hope to share the music with more ears, I like meeting people.

VP: Do you facebook, Twitter or Myspace ? What do you think of the whole social networking malarkey?

ALESSI: I use Myspace and Facebook but I don’t feel like a pro with either of them. The internet gives you longer arms to reach out to friends faraway and can be used like a musical library too. These are good things but nothing beats a call or a letter.

VP:  What are the first five words that came into your head when you woke up this morning?

ALESSI: Things were quiet in my head this morning. “Moonage Daydream” has been on my mind though. ‘Mama Papa coming for you!’

“Over The Hill” By Alessi’s Ark