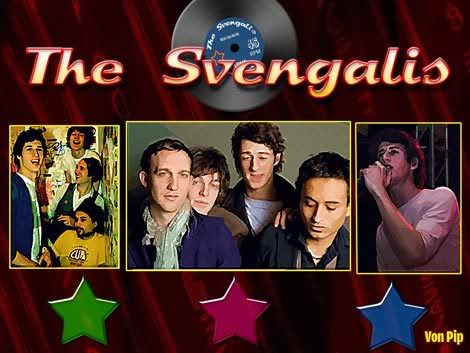 “Sting In The Tale ” By The Svengalis

Like most young chaps it would be right to assume that London based band the Svengalis like a good time. Their single “A Sting In The Tale” would indeed appear to confirm this view, it’s a gloriously fast paced romp through pop/punk/indie which is guaranteed to put a smile on the listeners face. Comparisons to bands such as The Libertines or The Arctic monkeys are quickly dispelled when you realise that this band have a sense of fun and are unlikely to disappear up there own bottoms. There is a fresh and raw edge to their sound, and a quick glance at their myspace page indeed appears to confirm the fear that they may be slightly bonkers , but also that they are having, what our American chums refer to as, “a Blast.” In my day having a blast meant a puff on a Capsten Full Strength, (unfiltered of course, I don’t much hold with this filtered nonsense, that’s for nancy boys and scardy cats) half a pint of mild, a game of dominoes, a chat about tarmac and possibly the sight of a dainty well turned ankle, but I digress . The Svengalis are another band whom deserve a wider audience , yet will they get it ? On the evidence of what we have heard thus far one would certainly hope so . The VPME is well known for its criticism of the lack lustre attitude of the music business and the total absence of imagination there within. The promotion of talentless meat puppets really gets on our dander , but now with myspace and the much hyped social networking phenomenon (do, doo, de doo do) bands with talent, energy and belief have the chance of gaining a wider audience. We believe this can only be good for music and we believe in The Svengalis and you should too …………..

Lets see what the young tykes have to say for themselves ….

VP: Ok what’s the story where did you all meet up?

Svengalis : There was a sign in the street, it said “Form band” – we were the closest 4 to it when it appeared, so here we are now. This is true. Ask Steve Lamacq, he was there.

VP: You’ve released the extremely catchy “Sting In The Tail” Through VILLAINS AND ROGUES How difficult is it for unsigned bands to get a record out these days?

Jim: I’d only do it if you’ve got time and cash, neither of which we had! Still, it’s fun and things turn out how you want them to if you do it yourself.

VP: Your Myspace page lists you as ” Indie / Soul / Punk” which in my book is a right good mix and no mistake guv. What sort of music inspires you?

Jonah: I like the Pipettes, but I’m still not sure if that’ s acceptable for a lad.
Mart: Violent Femmes, All the Factory Boys and Girls, Mucha, Modern Lovers – don’t think we sound like any of them though…
Jim: Barry White, Radiohead and Tatu.

VP : Is it not true that you have chums in other hotly tipped bands too? Who besides your good selves would you say are “the bands most likely to” in the coming year or so?

VP: What’s next on the agenda for The Svengalis?

Mart: Couple of gigs supporting Cajun Dance Party and then some studio time to get some more tracks on demo.
Jim: Who knows? We don’t, it’s always an adventure on our musical rollercoaster…

VP : What do you make of this so called “social networking” malarkey?

Jonah: Ah, wouldn’t it be great if you didn’t get all those requests from crap bands all the time? Anyone else get the request from the guy who used to be in Shalamar? Us – Shalamar. NO connection.

Jim: To be fair, if we were organised we’d spam people with friend requests too. Hooray for our shambolicness!

Jonah: They’re pretty sexy, me and Saul bought some fake replicas in Chinatown, Malaysia, but they made our feet melt so the dream’s over.

VP : Many bands from London and the south find the north of England a frightening, intimidating place full of flat caps, whippets and men with large rough hands, do you share this fear? Or can’t you wait to get out on your Svengali love bus and spread the word through the medium of music?

Jim: Jonah’s on a personal mission to spread love wherever he finds it, he’s not bothered about whether they have rough hands or not.
Mart: We already played Sheffield – it was great. Life is conspiring against us playing Leeds – we’ve been booked twice but had to cancel both. One day maybe!

VP: Who’d be your ideal support band or indeed band to support ?

Jonah: The Pipettes
Saul: Mr Hudson and the Library

VP : In five words sum up what a night out with the Svengalis would entail

The Svengalis : Every crime known to man

We’re also on a sick compilation that you can buy here:

Live instore -that is all I know !