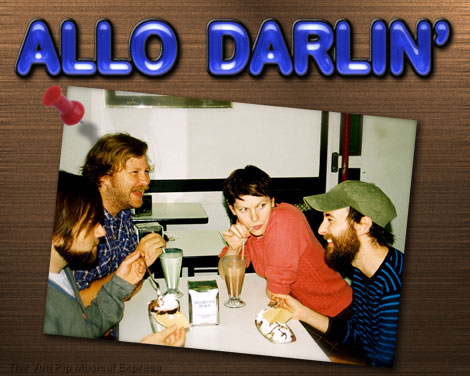 “Kiss Your Lips” By Allo Darlin’

The ukulele, it must be said, has never been my favourite musical instrument.  This probably stems from a deep rooted childhood aversion to uke playing toothsome Lancastrian comics, a fact which possibly clouded my view of Australian expatriate Elizabeth Morris’s musical venture Allo Darlin’ before I’d even heard a note. Apparently Morris started song writing on a uke after moving to London in 2005 but happily my foolish and narrow minded assumption that the resulting songs would be some sort of updated tweecore version of Tessie O’Shea was severely wide of the mark. As soon as I’d heard their debut single “Henry Rollins Don’t  Dance” I quickly realised the error of my ways.

Allo Darlin’s debut album builds on this early promise and positively chimes with an infectious youthful exuberance. At times you feel a little voyeuristic, like you’re peeking at somebody’s diary, such is the candour of Morris’s song writing. But such frankness is also her strength and she manages to counterbalance any accusations of being too saccharine with a wry sense of humour and an adroit lyrical style that manages to be utterly engaging and charming without ever being overtly cutesy.

The widescreen pop of opening track ‘Dreaming’ sets the tone for the album and also features a duet with our old friend Monster Bobby, who seems to have acquired a baritone of such subterranean depth that it makes Paul Robeson sound not dissimilar to a pre-pubescent Aled Jones. “Silver Dollars” is full of jaunty beauty whilst “Kiss Your Lips” is such a joyous serotonin inducing slice of pop that it almost makes you giddy with delight. Of course it’s not all unrelenting sweetness and light and beneath the often bright and breezy vibe there is a reflective and thoughtful mind at play. This is demonstrated in songs such as the gorgeous Hope Sandoval-esque “Let’s Go Swimming” or the fantastic “Woody Allen”in which Morris wonders if her relationship could ever be scripted by Woody Allen and contains the immortal line   -“sometimes it gets bad, but it never gets Bergman bad”.

Current single ‘If Loneliness Was Art” is a typical slice of Allo Darlin’ and really captures what they are all about, scratch beneath the seemingly carefree demeanour of the song and you can sense the angst and the yearning. As Elizabeth herself says, “It’s about wanting somebody. Really really badly.” Allo Darlin’ have produced a debut album that is enormously enjoyable and affecting, full of warmth, charm and beauty which will resonate with anybody who has loved and lost and loved again.

We spoke to Elizabeth to discuss what makes “Allo Darlin’ tick.

VP: Would it be true to say  ‘Allo Darlin’ came about  more by happy accident, born out of the pleasure of playing music, more so than a Machiavellian scheme to become famous?

Elizabeth: We’re definitely not driven by any desire to be famous. Probably more driven by the idea of not being famous. I think fame is horrible. I’m not very good with cameras or fashion or smiling when you’re meant to or any of those things that famous people are meant to be good at.

Obviously we want our band to do well, and we’d love to make a living from playing music, but we started out wanting to make people feel good when they heard something we wrote. Something that they might hear at a particular time and say “yes that’s how I feel, too”. We want to make people dance and cry, but not at the same time, obviously!

VP: Do you think a band name should be indicative of how the band sounds, for example ‘Allo Darlin’ sounds bright, breezy, and carefree. Did you spend a lot of time pondering on a suitable name?

Elizabeth: I think band names are pretty stupid. People spend ages thinking about them, but in the end they don’t mean anything. It’s just a name for people who play certain songs. Allo Darlin’ was sort of a joke name, after the demise of my old band The Darlings. I didn’t take it seriously but started playing under that name, and then by the time the boys joined and we were a band it was what people knew these collections of songs as, so we had to keep it. The Beatles is probably the most stupid band name of all. If you say any famous band name to yourself out of context from their music it sounds stupid.

VP: Your album’s certainly a joy to behold , are you happy with results , did it turn out as expected,  did it exceed your own expectations, or is there anything you’d change about it ?

Elizabeth: In retrospect there’s lots of things I’d change. My voice is a lot stronger now, and it sounds pretty weak to me in places on the album, but that’s just part of getting better I guess. As a band we certainly play these songs so much better now, after a year of gigging them almost every week. A lot of the songs were written the night before we recorded them, so it was all sort of done on the fly. But I love it for what it is and we had an amazing time making it.

VP: What would Henry Rollins make of his alleged reluctance to dance?  What gave you the idea for that song ?

Elizabeth: I’m not sure what he’d make of it – I never intended him to hear it! Let’s just say it has something to do with a certain boy who prefers hardcore to tweecore, haha.

VP: Amd how do you feel when you hear some people describe your music as ‘twee’?

Elizabeth: I don’t really care. It used to bug me but now I know it doesn’t really mean anything – it’s just a word people use. What I think might be twee and what I think our music is doesn’t really matter. People can call it whatever they want – it’s just pop music to us. When people come to see us play they don’t call us a twee band. This seems to be more of an issue for people in England than in the US.

Elizabeth : Well we’re about to head off on a two week European tour, then our album comes out in the States in October and we’re touring there again, and then it comes out in Japan in November. I’ve started writing new songs for the second album and we’ll start rehearsing them and getting ready to record that next year.

VP: …..And what have been your highlights thus far ?

Elizabeth: Our East Coast American tour in May was amazing. We ended up on the front page of the NY Times after our New York show and that pretty much blew us all away. Touring America had been a dream of all of ours forever, so it was pretty exciting to see even a little bit of that realized. Our album launch party with Standard Fare and the Middle Ones was probably my favourite show we’ve ever played, however.

VP: What was the first record you remember buying?

VP: …And what’s the one song you’d wish you’d written, and why?

VP: Finally what five words are the most overused during an Allo Darlin’ band rehearsal session?

Elizabeth: “No more funk” and “sorry I fucked it up!”

“The Polaroid Song” By Allo Darlin’