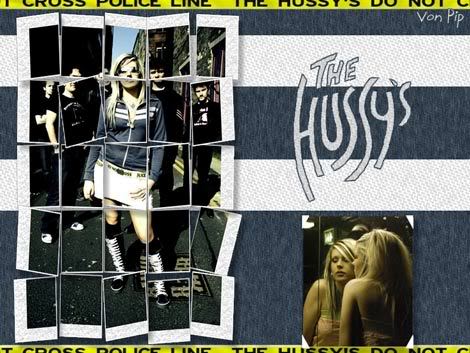 The Hussy’s are a 6-piece band from Glasgow.

Their songs recall the quirkiness and the pop hooks of amongst others, the vastly underrated Supernaturals. It will therefore come as no surprise to learn that head Hussy James McColl indeed used to be The Supers singer and songwriter. The Hussy’s however are not a rehash of McColl’s former band with a female singer, they have a sound, which is all their own, but one that is not afraid to draw on many influences. You could hear a dash of Madness in one track, a touch of Kirsty MaColl, or even a nod to Polly Styrene in others! Trying to pin down a style is difficult as the Hussy’s’ don’t seem to sit still for too long, compare “Tiger” to “We Expected” or listen to the quirky “Rock Concert”, and in terms of style, they could be by different bands, were it not for Filli’s distinctive vocals giving it that “Hussy” factor.

The Hussy’s released their debut EP ‘Tiger’, in September 2005, and their second EP in March 2006; both on their own label Fat Cheerleader records. These EPs picked up airplay on various radio stations, including Janice Long at Radio 2, Steve Lamacq at Radio 6 Music and Jim Gellatly & Dominik Diamond at XFM. Long commented “Any A & R man worth his salt should sign this band now”

In May 2007 the band released the fabulous “We Expected” as a single in the UK. It reached number 22 in the Radio 1 Indie chart.The band have also released an album in Japan and have had their song “Rock Concert” used on a nationwide advert for very comfortable, stylish yet affordable, shoes in the USA. They will release their excellent new EP “Sunday Morning” later this year.

If you’re looking for dark brooding angst ridden music, then you’ll be disappointed, however, if summery, sing-a-long Indie pop, guaranteed to put a smile on your face, is your thing, then you may want to check out The Hussy’s. We decided to find out what the scamps had been up to and for the sake of all the grammar Nazi’s out there (Mark!) we dared to broach the subject of … that troublesome apostrophe!

VP: James is well known from his work in The Supernaturals and the Hussy’s are oft referred to as “James’ project”…How did it all come about?

The Hussy’s: Steph and James started the band. James had written some songs like “We Expected” and wanted to do a female fronted band like the Cardigans/Eurhythmics. Had auditioned loads of singers but none were any good? Caught Fili playing her acoustic guitar in a folk club and that was that really.

VP: What’s with the apostrophe in The Hussy’s? Or is this a deliberate attempt to piss off the grammar police for whom “Eats Shoots and Leaves” is their Bible

The Hussy’s: No, it is to distinguish ourselves from the clothing label. It was intentional. Every two weeks we get e-mail from someone saying “Do you realise this means belonging to and why have you done this and so on”. We send back e-mails with terrible spelling and punctuation to annoy them.

VP: Is Pop the new Indie?

The Hussy’s: The whole Indie music thing in the UK with 4 little guys with mod haircuts who like Oasis, The Jam, Libertines, Arctics and the Beatles is extremely tired but record companies/NME just keep it going on and on and on and on. We don’t like being called Indie because we do try and make our records as pop as possible.

VP: Where do the ideas for the songs come from?

The Hussy’s: Television, books, people we know, Myspace. Life in all its shades and colours.

VP: Female fronted bands often get the Blondie comparisons but whom would you say are and were your musical influences

The Hussy’s: Each band member has their own thing and you can hear that in the way they take the songs and change them to get their little thing in. Gordy the drummer is a Rush fanatic and likes the Police and you can hear that in the drums. Steph likes punk and the Beatles, Greg- Ben Folds, Ronnie- Phil Collins, James -The Move and Fili likes Avril Lavigne and Distillers and so on. When each member plays their part in the rehearsal room or studio it just sounds like the Hussy’s but you can hear everybody’s influences. Of course we like Blondie- who doesn’t?

VP: What’s the best gig and the worst gig you’ve played and why?

The Hussy’s: Best gig – probably to a half empty Fopp records (at closing time) in May. We were amazing and played out our skins for some weird reason.Worst gig- a gig in Baby Blue in Glasgow where the police stopped the gig just as we were about to go onstage. We sold 10 CDs though so it wasn’t that bad.

VP: What do you make of the current music scene? We seem to have genres every week, nu-rave, nu-gaze. Is it complete bollocks or will the influence of the Internet herald a new musical age and wrest the power away from the big labels, whom, it would appear haven’t really anticipated the change in the musical landscape?

The Hussy’s: For example it costs us £450 to do a gig in London (diesel/van/hire/hotels). We have to fund that from CD sales or our jobs. A signed band would get that paid for by a record company. It will cost us £7000 to make our next album- we have to get that together ourselves somehow. A record company would laugh at such a cheap record. They have e -teamers whose day job it is to go on forums and hype up say “Air Traffic”. You can’t compete with that and that’s why everyone wants to be signed to a big label- life is so much easier and you can quit your job and tell all your friends how cool you are. People don’t realise that bands like Camera Obscura and Pipettes, on very small labels, have achieved huge amounts.

VP: What’s going on in Scotland musically right now? Are you drowning in A& R men trying to discover the new “View”?

The Hussy’s: We have no contact with A & R men so wouldn’t know. Glasvegas, Johnny and the Debutantes are some of the good bands kicking around.

VP: Ever felt the urge to maybe cover “The Day Before Yesterday’s Man” or “Smile”

The Hussy’s: We did “Smile” once when Fili was being sick backstage and James had to sing all the songs. No one in the audience realised he used to be a singer and so well the crowd congratulated him afterwards for doing. Apart from that one time- no.

VP: You’ve released what I would say is your strongest single yet ” We Expected “ in May 2007 what’s next on the agenda?

The Hussy’s: We release our next EP through Weekender on September 24th called “Sunday Morning”. It has three other tracks “Jesus”, “Rock Steady” and “Sister Mary Jo”. It is classic Hussy’s and well worth buying.

“Sunday Morning -Live On Channel M” By The Hussy’s