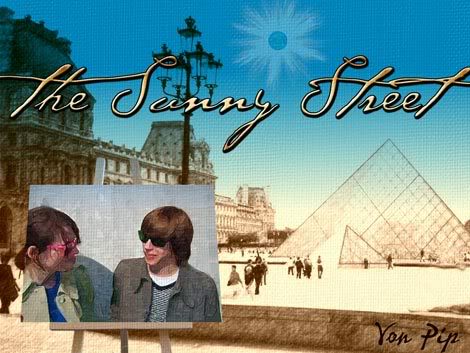 “All The Way” By The Sunny Street

What can I tell you about The Sunny Street ? Well, if I’m honest I’d have to say I had no idea who they were when I randomly (yes, I use the word correctly which is a rarity these days) came across their delightful cover of New Order’s “All The Way.” Thanks again to the Internet, great new music can be found with a little bit of effort and I found myself enraptured with this gorgeous acoustic version featuring a hauntingly swoonsome vocal. I endeavoured to find out more about The Sunny Street and was delighted to find that they had other great songs in up their talented sleeves . The duo hail from France and have recently moved to dear old “Blighty.” I had a little chat and was also rather pleased to discover that although they said their english was a little “fragile”they could do what many English speaking bands have singularly fail to do, yes, they were able to understand my questions ! So with out further ado let’s direct our feet to the “Sunny Side Of The Street” and say “Allo, Allo” to this captivating duo

Note: I have tried to keep my questions clear, concise and not use slang or colloquial expressions, which could confuse….

VP: Blimey Guv ,Wotcha !Sunny field of wheat,where did ya meet and ‘ow did ya come ter form a band, me old china?

VP: Tell us about yourselves , Who are you? How did you meet ?

TSS: The Sunny Street is just two persons: Delphine and Remi. We’re both 25, French and we met each other at the university in the south of France. Delphine sings and Remi plays the guitar.

VP: You say your both originally from France …what was behind the decision to move to England?

TSS: It’s been very old dream for both of us to move someday to England. After our studies we didn’t really find jobs we liked and we were a bit fed up, a bit bored… Sounded like it was time for a big change and we came to London. We’ve always liked big cities and, we’ve been here for more than a year now and we’re extremely happy.

VP: You’ve done a fantastic acoustic cover of New Orders “All The Way” What made you pick that song? Are you big New Order fans ?

TSS: Thank you! “All The Way” is maybe my favourite song ever, one I have no problem to put on top of every list. I first listened to it when I was 8 or 9 on a cassette of Technique I found in my brother’s room and then I couldn’t stop playing it on my walkman. We’re actually in France on holidays ay the moment and we had the chance to see “Control” it was so touching. This music is very important to us.

VP: Have you any upcoming shows / plans you can tell us about ?

TSS: We have a gig at Lund in Sweden planned in the end of November and for the moment that’s the only concrete plan, but we will know more very soon. We’re currently recording new tracks for singles. It’s thrilling.

VP: Who are your musical influences ?

TSS: Numerous I guess; we are pop lovers from Blur to Belle and Sebastian, from 60’s french pop songs to Hidden Cameras… We like melodies, melancholy, rhythm.
But for the Sunny Street it would be more specifically 80’s influences like Felt, Brighter, and yes… New Order and Factory records for example.

VP: What do you make of English T.V shows ? ( You can be rude I think they are complete mind rotting rubbish in general with the odd exceptions)

TSS: The TV in our flat never worked, no signal, so we don’t know exactly… We’ve seen this show where two teams buy antiques and try to sell them at auctions and a Big Brother episode, not really too different from French TV. And we’ve also seen this show where disabled people chose to cross the Sahara on foot whilst showing no tolerance and being extremely rude to each other… It was a fascinating yet also very sad show. But it will be on in France in few years I’m sure… We watched the TV a lot in France and we miss it a bit here. We buy cheap DVDs instead.

VP: Myspace Or Facebook ? Are they a good thing ?

TSS: Myspace. We don’t know Facebook too well, but it seems more of a personal network and we found with myspace a way to make our music a little bit more available… I know myspace is criticised a lot… but for us it helped a lot, we found a label, gigs and it continues so I think it can be a good thing.

VP: Sum up your last year in five words

Buy The Ep “They Hurt You Everyday” -Click on image 0 thoughts on ““Brighter Than The Sun” – The Sunny Street Interview”