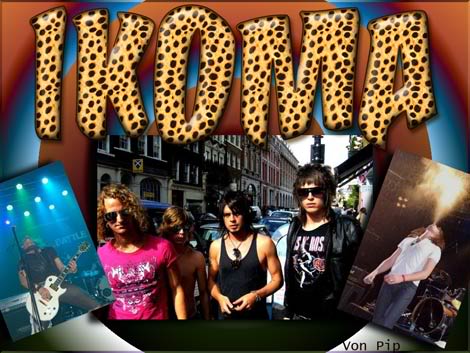 Rock has had a pretty bad press over recent years, there’s maybe been a  tendency to concentrate on style over substance, on living the lifestyle, without actually having the music to back it up, and bizarrely there’s always been the strange Rock tradition  of  pretending your guitar is, and let’s not beat about the bush,…. your  willie.   Ask people about “Rock” and invariably the response will include  references to the following ;  poodle premed, spandex clad 80’s rockers shaking their head to Europe’s Camembert infused  anthem “The Final Countdown,” the  worship of  Beelzebub and the sacrifice of vestal virgins, The Zep, Ozzy biting  the heads off live bats, Teutonic  rockers, The Scorpions, managing  to keep resolutely straight faces whilst  earnestly singing complete shite like “ I  follow the Moskva/down to Gorky Park/ Listening to the wiiiiind of change” and  bands such as Whitesnake with their incredibly  naff  Finbar Saunders style titles such as “Slide It In” “Ready N’ Willing” and  “Slip Of The Tongue.”

However the  New Wave Of British Heavy Metal (NWOBHM) gave us hope and started out rather encouragingly, with bands such as Iron Maiden, Saxon, Motörhead, Def Leppard, Angel Witch, and the Tygers of  Pan Tang  giving rock a new twist but it rapidly disappeared up its own leather clad jacksy as many bands either couldn’t maintain the quality of their early  material or  moved away from the  adrenalin fuelled , noisy speed thrash that the first wave of  the NWOBH provided (Motörhead, being one of the exceptions.)   Saxon slowly morphed into Spinal Tap sans humour, whilst the likes of Def Leppard started to produce a more generic, clichéd American radio friendly sound, and were soon swept up in the burgeoning L.A. rock scene headed by the likes of  Motley Crue and  followed  later by Guns N Roses.  All new musical movements, which are often created by the music press in league with record companies, eventually get marketed and manufactured to such a degree that they become pale corporate imitations of what they once were, to quote David Coverdale “they lose their bollocks” which is a shame.  In the beginning the NWOBHM shared the same  working class ethos as Punk , (Penetration’s Fred Purser formed the Tygers Of Pan Tang, Motörhead’s Lemmy teamed up with the Damned, whilst the Damned’s former bassist Algy Ward formed critically acclaimed band, Tank) it was all about speed, noise and excitement. Metallica often cite the NWOBHM as a huge influence, but sadly the movement petered out and instead of the “new wave” we were left with more of a “demi –wave.” Rock bands donned increasingly comical stage outfits and many took on the appearance of refugees from the circus of the absurd, as their gravity defying hairstyles contained almost as many ozone damaging toxins as a U2 world tour.

Almost as a reaction to this stadium rock posing, the late 80’s saw a strange movement emanating from the Midlands called “Grebo.” It was scruffy, it was smelly, it was D.I.Y. and it was a fun, if slightly confused affair, taking in disparate groups and artists who seemed to have little in common and drawing influences from Rock, Metal, Indie, folk even hip hop and dance. “Grebo” did produce some wonderfully entertaining bands such as Pop Will Eat Itself, the marvelous Wonder Stuff, erm… Gaye Bykers On Acid and Leicester’s Crazyhead –( Come on, they had a bassist called Porkbeast,- who now incidentally teaches history at DeMontfort University !-Rock n Roll !! ). The music press who essentially invented “Grebo” become confused about what actually constituted a “Grebo” band and after a while seemed to dismiss it, preferring the earnest angst emerging from the likes of Seattle which was making waves across the pond. Yes lank hair and introspective torment made much more sense to the art-school sensibilities of NME journalists and soon we were swept up in a tsunami of “grunge.” Aside from Nirvana (who were great) Babes In Toyland and Pearl Jam, a lot of what was termed as “grunge” went over my head. There were innumerable musical horrors spawned by this movement, as labels signed up anybody who had a vague connection with Seattle, or lank hair  coupled with “tortured poet eyes.” Many music fans were repulsed by such needy whining and took solace in the huge array of fantastic bands that labels like 4AD had on their roster, (The Pixies, The Pale Saints, Lush, Throwing Muses, and The Cocteau Twins etc.) This certainly helped music fans through a difficult and confused musical period and enabled them to counter this ego-centric forerunner to Emo, the next time you see Ivo Watts-Russell buy him a drink as a “thank you” for providing a relatively safe haven for your ears.

Is the time now ripe for a rock revival?  Led Zeppelin are back, so are Guns N Roses, whilst The Kings Of  Leon can’t decide if they are going to turn into a  Peter Cetera tribute band (it’s a fine line) and surely we can do better than a sixty year old Geordie singing about school girls. In any other context that  would have the Daily Mail, donning its most austere puritanical maiden aunt attire, setting its finger to wag mode and shrieking “Ban This Evil Filth”; but hey it’s AC/DC so don’t worry.  Brighton based band IKOMA seem to think it’s time to put  the rock back into the roll  and  they may have a point.  IKOMA seem to have a sound that whilst drawing on the fine traditions of American rock also has a melodic Indie snarl. Searing guitar riffs underpin vocals packed with attitude which are far more palatable than the old school “constipated shriek” of yore. They have taken the rock template, updated it and ensured it doesn’t sound hackneyed or clichéd, whilst  the band’s image mixes the classic “rawk” look with what appears to be the results of the New York Dolls and Guns and Roses having some sort of logistical mix-up involving stage apparel.  IKOMA are fast establishing a reputation for being hugely entertaining in a live setting and their debut single “Last Chance Honey” is set for release in the very  near future. It’s got attitude, melody and a good old fashioned big bollocked  Rock chorus-  it recalls elements  of Crazyhead’s excellent cover of the Sonics “Have Love Will Travel” which is  a can only be a good thing.  Will  IKOMA  fall  between  two stools as Crazyhead did many years ago? Considered too Rock for the Indie crowd, yet too Indie for the Rock crowd? -We shall see-meanwhile the band is off to the States soon to play a number of showcase gigs; I donned my spandex trousers and had a chat with guitarist Rikki to discuss all things rockular.

VP:  How did you all meet up and how did the band come together

Rikki: The Ollie and I we’re living together with a bunch of other musicians and friends who later formed a couple of bands such as The Kooks etc. I met  Davey through Max (The Kooks) and would constantly visit along with a stream of other musicians and friends. Playing around the circuit and drinking in the same places we would bump into each other often and talk music. Realizing we shared a lot of similar tastes in music, fashion and well..women, we started jamming and haven’t looked back. Davey, Ollie, and I are the original members.

VP:  Where does the band name come from?

Rikki: It’s a Japanese mountain… Also, Leah from McQueen, Daveys girlfriend at the time, was showing him some lyrics and featured the word Ikoma. Davey spotted it as a great band name and a great way to describe how we were seperate from the rest. The hard edge rock sound vs the young arty indie kids of Brighton .

VP:  You look like a rock band, but have any edgier sound, how would you describe your music?

Rikki: A perfect blend of melody and muscle, heavy pop tunes everyone can sing along with and smash your house up too.

VP:  Rock bands have had a bit of a hard time in the past, what with poodle premed rockers of the 80’s, sexism, and erm songs about the “dark side”. How do you feel you can convince people you’re different from the old stereotypes?

Rikki: In our opinion what bands have got wrong in the past, especially in the 80’s, was letting partying come first and music second. We’re not advocates of this theory, the music is number one above all! We have always and will always let the music do the talking. Not drinking champagne out of cowboy boots and snorting your own body weight in blow!

VP:  You’ve recorded a single , when’s the release date and any plans for a video ?

Rikki: We currently waiting for our first single ‘Last Chance Honey’ to be mastered. This should be complete by the end of the year and will be released on itunes with a video directed by ‘Sol Friedman’.

VP:  You’re off to play America soon, what’s the plan?

Rikki: Playing in America has been a dream of ours due to its prestige’s rock history. We’re gonna be playing the Viper Room, Troubadour, and Spaceland alongside a huge press campaign with radio stations and magazines in LA. We cant wait to get out there because the crowds in LA really know how to rock!!

VP:  Who are your musical influences?

VP:  What have been your standout moments of the last year?

Rikki: Indie kids with more of an interest in being arty and fashionable than being talented musicians. Brighton has a lot of bands but who’s to say that they’re any good! Sift through the shit and guys trying to be cute and you’ll find us, balls to the wall rock n roll that you can sing along too.

VP:  Five words to sum up your sound