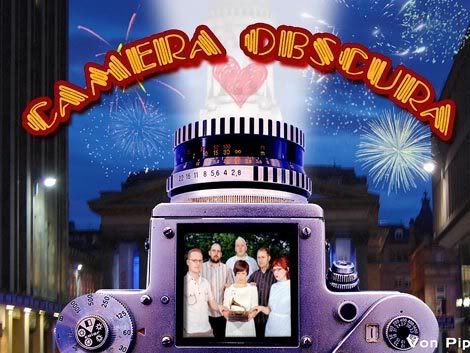 Every time I go to Scotland it rains, it even seems to rain in between showers up there. So when Travis posed the question “Why Does It Always Rain on Me?” The answer was surely “it’s ‘cos you’re from Scotland mate. ” It truly is the land of “ High Land Hard Rain” and for a country that has such a chilly climate and famed thistles that look somewhat circumcisional in aspect, you’d think it would be the last place on earth where a  kilt would be deemed an appropriate form of attire. However, despite the weather, I’m very fond of Scotland; it is the home not only of my forefathers and whiskey but also of some of my favourite music –  and Glasgow ’s Camera Obscura certainly tick the  “fave band” box.

Their wonderfully dreamy, swirling 60’s tinged, tear-stained tunes, relating tales of heartbreak and disappointment never fails to lift my mood, despite the subject matter.  Camera Obscura’s lyrics often deal with failed relationships and the emotional wreckage thereafter, a world where heartbreak is an inevitable consequence of love and longing, regret plus the occasional dash of healthy cathartic bitterness take centre stage. Yet often the melodies sound so carefree so jaunty, that one imagines they could even elicit a few dance moves from The Duke of Dour himself, Gordon Brown.  The slower less upbeat numbers are haunting, reflective and strangely comforting. Then of course there is the voice which not unlike an actual Camera Obscura, draws light into the darkest of places. Yes, Tracyanne Campbell’s gorgeous mellifluous vocals could illuminate the most tenebrous of atmospheres, at times so melancholic it can move you to tears, yet at the same time, provide a warm comforting glow.  The band’s philosophy is possibly best encapsulated by Tracyanne, who, when asked what makes her happy, responded thus; “Listening to music . . . but usually when it makes me feel sad.”

Since the band’s formation in 1996, they have gained many loyal fans, and the band certainly captured the heart of John Peel (appearing regularly in his “Festive 50” and performing at his 65th Birthday party, just months before his death.) (Coincidentally there is a Doctor Who novel called “Camera Obscura” which involves one of the Doctor’s hearts being captured) I spoke to Camera Obscura’s Carey Lander to find about influences, touring and are radio playlists the work of Satan?

VP: So the band originally formed around 1996, how did you all meet up?

CAREY: Gavin and Tracyanne are the two original members, the rest of us have been ensnared along the way. Glasgow’s a pretty small place so I guess we just bumped into each other at some point.

VP: Was there a collective idea of what sort of sound you wanted to produce and who would you say your musical influences are?

CAREY: I think it’s important that individual band members have some kind of shared love of music and an idea about how they’d like to sound but it maybe isn’t as considered as some people think. I think we’re all very respectful of music from the 50s and 60s and the love of that sound is a big part of the music we make but we’ve also got our own particular weaknesses. Gav loves Joy Division and New Order with an unquenchable enthusiasm, Lee has a more punk past, Tracyanne is deeply sympathetic to 80s music. It hopefully stops us from becoming a predictable pastiche.

VP: It’s been a while since your last album “Let’s Get Out Of This Country” but apparently you have a new one recorded, any news on a release date and tour?

CAREY: The new album is finished, mixed and mastered but it won’t be out till next year. There is lots of stuff that needs to be done first but we’re really pleased with it can’t wait for people to hear it and to play the songs live.

CAREY: I guess the question from Lloyd Cole’s song has just been reverberating around in Tracyanne’s head for a couple of decades and popped up when she was writing. I’m pretty sure it wasn’t something she set out to purposefully address. I’m still quite amazed by that song and how well it turned out because I remember thinking it was really odd and that no one would like it when we were just starting work on it.

VP: You are among the great bands that have emerged from Scotland over the last few decades, who are your favourite artists from Scotland, past and present?

CAREY: I hope so. It’s intentionally been a fairly quiet year for the band in terms of touring but that’s because we’ve been working on the new record. We’re also about to do our first trip to Asia which ought to be fairly special. It’s been quite nice for us to have a bit of time off and a stab at a normal life this year. I’ve enjoyed the break and I’m looking forward to next year which is bound to be pretty mental with a new album to promote.

CAREY: Actually recording the albums is always a brilliant experience. It’s intense and scary and challenging but when you’re proud of something it’s a good feeling. A lot of the touring has been great too. I would never have seen much of the world without getting to tour with the band. Playing in Mexico City was a highlight for all of us. As was playing at John Peel’s birthday party for his 65th. I think maybe the weirdest thing is just the lifestyle in general. It’s strange spending so much time away from home with the same small bunch of people. It’s also weird how you can spend days travelling to get to somewhere to play a show for 45 minutes and then spending days travelling back again. It’s also odd trying to fit back into normal life when you get home. Touring sort of spoils you. I think I’ll feel restless forever.

VP: What’s been the biggest single change you’ve noticed in the music biz since you started? The internet? I-tunes? MySpace?

CAREY: A lot’s happened in the last ten years. I think Myspace has been an interesting thing for us because it’s a nice easy way to have contact with fans and for people to hear your music, but its probably digital music that’s been the most important development. That’s been a positive and a negative. Music piracy seems to be a bigger problem than ever because illegal downloading has become the norm, but the internet has also been the making of us in many ways.

VP: What’s are the worst and best aspects of touring?

CAREY: Probably all the obvious ones you can imagine. Actually travelling to different places and meeting lovely or interesting people who also happen to like your music is pretty great. Playing live at its best is amazing. Packing is a bit of a bummer. As is running out of clean underwear and forgetting your best shoes. Loading and unloading the van, setting up and soundchecks are a tedious part of the job. Missing home, people, birthdays, pets, cooking are tough. And when you’re away for ages you can’t wait to be home and when you get home you can’t wait to go away again.

VP: Personally I think radio playlists are the work of Satan and his foul legions, do you have any ideas of how the music biz could be improved?

CAREY: I think there is some argument for radio playlists in that it does at least encourage an emphasis on new music, though it is inherently limited. I haven’t got much idea how to sort out the music business. I get depressed if I think about it too much.

“Lloyd, I’m ready To Be Heartbroken” By Camera Obscura

“If Looks Could Kill” By Camera Obscura

“I Love My Jean” By Camera Obscura

“Let’s Get Out Of This Country”By Camera Obscura