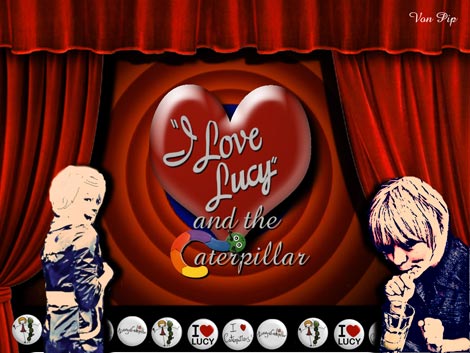 “Kings Cross” By Lucy And The Caterpillar

Lucy & The Caterpillar is one of the many new artists creating a buzz within Manchester’s music scene at the moment. She plays bittersweet indie-folk infused tunes and writes songs involving waiting at train stations, alcopops, red wine and stupid bags of crisps . However despite her love of a beer or five , I don’t think shes quite in the George Best category yet. Opinion seems divided , its seems people either get Lucy’s music or they don’t. There appears to be no shades of grey as yet . However listening to “Kings Cross” proves beyond doubt there is a huge potential , and although she doesn’t sound much like Kate Nash , she has a similar quirky yet descriptive world view.

She has already supported the likes of Scott Matthews, Get Cape Wear Cape Fly, Simple Kid, and played D’percussion at Manchester . The VPME had a word with Lucy, under an enormous lettuce leaf , ahead of her appearance at the Leeds festival this weekend (23rd August 2007) and tried to get this Caterpillar malarkey cleared up

VP: So who is Lucy and who the devil is the caterpillar?

LUCY :I am Lucy :-) and the caterpillar is different things, it depends on the day.. like right now, its my massive cardigan!!

VP: For people new to Lucy and The Caterpillar, what have you released and what’s next on the agenda?

LUCY : Well i have released 2 singles, “Red Red Wine “and “Kings Cross”. But nothing really is happening at the moment ,I think I’ll be releasing a new single soon but I’m not really in a rush.

VP: Who are your musical heroes

VP: Whats been the most nerve wracking experience as a performer so far

LUCY : Latitude Festival, I was a complete leaf,I just couldn’t stop shaking. I think its because the stage was huge! A lot bigger than me! I got through it ok though!

VP: Tony Wilson, Mr Manchester has sadly passed away , is his legacy still felt by the latest generation of Manchester bands /performers

LUCY : Aww its such a shame, without him, Manchester music isn’t the same really. I think a lot of songs will be written about him.

VP: Is your glass half full or half empty , are you a pessimist or an optimist ?

LUCY : My glass is half full :-) I look to the future and live for today.. is that cheesy? haha

VP: What was the first record you ever bought ?

VP: Social networking / Blogging etc is it hugely helpful in getting your music heard, or is this myspace malarkey just a load of old cobblers?

LUCY :I think its a load of cobblers really. People either listen you your music or they dont, having cool blogs and good pictures is pathetic. ( The VPME Excepted of course)

VP: Should we have to suffer a Spice Girls reunion ? wouldn’t it have been better, and more humane to the public ears to have a whip round if they needed the money ?

LUCY : I don’t think they are joining up again for the money, I think its more about.. proving they can still do it and they actually did something in their lives. You know what? I used to love the spice girls, I had a little club, all the girls in the neibourhood used to come to my house and I used to make up dance moves and they’d follow, ha!

VP: Are You religious , do you believe in the existence of Bono for example ?

LUCY : I’m not religious, I believe in living. :-) live for the future thats what i say. Believe in yourself

VP : Sum up the past year in five beautifully descriptive words

Lucy And The Caterpillar Wallpaper