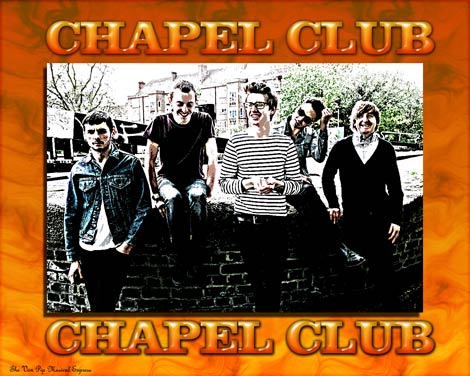 “Moody, majestic and magnificent,” just three words plucked from the myriad of superlatives that have been used to describe upcoming London based five piece Chapel Club. Legend has it that after just three gigs the band had managed to generate  such a  buzz that a major A&R scramble ensued with labels falling overthemselves to snap up the band’s signature . A  deal was eventually agreed upon and the word on the street was that  the bidding war had involved the sort of money that would make your  average MP’s expenses claim look like chicken feed (whilst the band celebrated by lighting their cigars with crisp fifty pound notes, obviously!)  Chapel Club however have insisted that any talk of ‘comedy sized amounts of cash’ is nothing more than fatuous tittle-tattle, as lead singer Lewis explained, “All this stuff about bags of cash is ridiculous. Our bass player hasn’t even got a house. I think as of yesterday he had about £18 in his bank.”

Whatever the truth, it is an incontrovertible fact that Chapel Club are one of the most exciting young bands to have emerged in recent years, combing the swagger, power and distortion of bands such as the Jesus And Mary Chain and My Bloody Valentine with swoonsome melodies and powerful poetic lyrics to produce music that positively glitters with dark beauty. It’s a sound that manages to sound heroic without ever sounding bombastic and possesses a natural eloquence and intelligence that never sounds contrived or pretentious. Their third single “Five Trees” brings together all the elements that mark Chapel Club out as special  band of huge potential,  from the  thundering bass lines, to  the swirling distorted guitars allied to  Lewis’ laconic McCulloch meets Morrissey style of vocal delivery.

Some, rather bizarrely, have compared Chapel Club to White Lies, which aside from being monumentally lazy, is blatantly way off the mark. Whereas White Lines specialise in a particularly weak, stylised brand of  Matalan Joy  Division and while their  metamorphosis from  pop band, Fear Of Flying, to sulky faced  black army shirt clad miserabilsts, was as cynical and as calculated as anything  seen on X Factor, Chapel Club appear to be very much the real deal.  They are not redolent with the cankerous whiff of a manufactured ‘big label make over’, nor do they deal in ‘designer angst’ they mean every lyric they write. True, Pixie Lott fans may well find their music a little intense and introspective, but to brand them as simply merchants of gloom means you’ve not really been listening have you?  If you really pay attention to Chapel Club you will find their music is infused with a real sense of hope, ambition and purpose, they find beauty in the mundane and try to make sense out of the vagaries of life through their own experiences, hopes and fears. At the heart of their songs lies Lewis’s dark poetry which deals with the big issues, sex, love, grief, frustration, pride, power, jealousy, and (in ‘The Shore’) the desire for the comforts of religious faith in a mind that’s far too cynical ever to accept the possibility of God. Chapel Club certainly look set to be on the cusp of something very special, and their album is being eagerly anticipated here at VP Towers. We had a chat with Lewis to find out about where the band came from, where they hope to be going and elicit more information with regard to their debut album .

VP:  I believe that in your ‘embryonic’ state you didn’t really have a collective name . What was it that made you plumb for ‘Chapel Club’

LEWIS: We went through a lot of different names and all the ones we liked were taken already. So we kind of stopped thinking about it – we didn’t have a name for about nine months. Then suddenly we were planning to release Surfacing and needed a name pretty desperately. We all threw a few suggestions out there and ‘Chapel Club’ was the only one nobody had huge problems with. And it seemed pretty appropriate because sometimes after rehearsals we used to sit and drink in a churchyard on Old Street.

VP: Your  rather epic new single ‘Five Trees’ has just been released, can you give us a flavour of what the songs all about ?

LEWIS: ‘Five Trees’ is the story of a dream produced by a weekend of over-indulgence I had a few years ago. It’s about something I saw in my sleep when under the influence, an image or set of images that contrasted very vividly – and, so it seemed then, meaningfully – with the rainy Monday morning and working week I woke up to.  Five trees on a dark hill, with leaves like glowing stars which began to detach from the branches and drift to the ground like snowflakes. My lyric can do very little to capture the scene as I saw it then, I guess. But it’s a start.

VP:  You’re currently working on your debut album, does it have a title yet and when can we expect its release?

LEWIS: No title as yet, though I just suggested something to the guys the other day that I’m hoping will stick. The record’s finished, we just need to mix and master it. I guess it’ll be out towards the end of 2010 or the beginning of 2011.

VP:  Now for the dreaded ‘how would you describe your music question’ and who would you say were your biggest musical influences?

LEWIS: It’s tricky describing our sound because we’re still relatively new and we’re still evolving, I think. The album has a pretty grand, emotional sweep to it – big, bold songs about love and loss and faith and being in your twenties wondering if you’ve wasted all your chances already. It’s pretty dramatic, swoonsome stuff, punctuated with some darker, more aggressive moments. I guess if I had to name influences it’d be artists like MBV, Jesus and Mary Chain, Washed Out maybe, plus a little Brel and Sinatra. On the other hand, the songs we’ve been piecing together on the road and at home since we finished recording the album are already sounding quite different, so who knows what we’ll sound like a year from now.

VP:  Your certainly a band whose lyrics could be described as literate, indeed you list the likes of Hemmingway, Mikhail  Bulgakov and Knut Hamson amongst your influences  Would you say that your  lyrics are just as important as the music ?

LEWIS: They are to me, of course. I try to have them avoid cliché and work as words read from a page as much as words sung or spoken. I think they’re better than most lyrics out there right now, but then I guess that’s not saying much. I don’t know if anyone actually pays them much attention – it doesn’t seem like it!

As far as influences are concerned, those are just some of the writers I happen to have said I’ve enjoyed. It’s not like I approach a new song thinking about emulating this or that author. That would probably be a little weird.

VP: I’ve often wondered how up and comings bands react when they first hear themselves played on the radio, do you think “oooh this is good….oh wait it’s us” and then furiously text all your friends?

LEWIS:  I haven’t actually heard us on the radio yet, but I don’t think I’d text all my friends if I did… Somehow I imagine that might make me look a little strange! I do get lots of messages from people saying they’ve heard us though, which is nice.

VP: What have been your most memorable moment as part of ‘Chapel Club’ thus far?

LEWIS:  The most memorable part? The Shacklewell shows were great, our first gigs at this cool little African pub in east London. The Village Underground show recently was incredible, so many people and such a great atmosphere. To go from the back room of a pub to playing to 600 people in 7 months or something feels pretty cool. And of course recording with Paul and hearing the finished album tracks has been exciting. But I guess my best memories so far are from the days before all the hype and stuff, before we even had a name. Memories of leaving our rehearsal room on a weeknight with one or two new songs sketched out and new lyrics floating around my head, new ideas, getting excited about melodies on the bus home.

VP: Everybody has goals and ambitions. What would you say yours are at this stage in your musical adventure?

LEWIS:  First off I just want to get the album out there, to let people hear the songs in full and see what we’ve been doing these last couple of years. Then I want to write more. As pretentious as it must sound, for me being in a band is all about the creative act, you know? I love that part of it more than anything else – capturing ideas and feelings as vividly and completely as possible. So my main aim is just to keep writing, keep making more music, keep exploring different avenues. My only ambition is to be able to do that and keep doing it.

VP:  Are you playing any festivals this year?

LEWIS:  We’re playing loads of festivals, in the UK and abroad. I can’t remember which have been confirmed though – I think in Britain it’s Glastonbury, T in the Park, Oxygen, Truck Festival, Tramlines, Field Day, Underage Festival, the Underground Festival at Gloucester Guildhall… loads basically. The dates should all be on our website.

VP:  Give us a five word motto to sum up the band .

“O Maybe I” By Chapel Club

0 thoughts on “Their Way Of Praying – Chapel Club Interview”