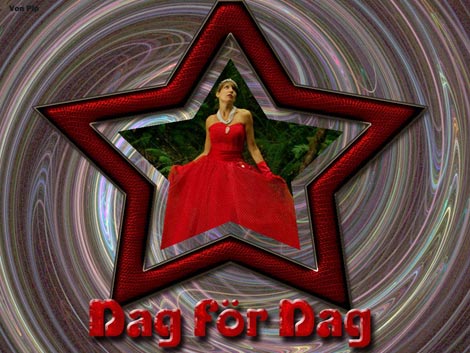 If you like reverberating guitars allied with spectral vocals of infinite beauty then Dag för Dag might just be your favourite new band.  Formed by the American brother and sister duo of Sarah Parthemore Snavely and Jacob Donald Snavely, Dag för Dag first became a reality in the wake of a period of travel that makes the likes of  Bill Bryson appear  a somewhat insular and provincial individual.  After living separately around  the world  in places as diverse as San Francisco, Greece, Spain, London and Honolulu the siblings reunited and set up camp in Sweden, (it seemed  “as good a place as any”) and began writing music together.

Dag för Dag’s first offering  was the ‘Shooting From The Shadows’ EP released in 2009 and since then, with the addition of  drummer Chuck Bukowski, they have  toured with A Place To Bury Strangers ,Wolf Parade, The Faint Cursive, Lykke Li, The Shout Out Louds, Handsome Furs and The Kills. In an attempt to nail down Dag för Dags style comparisons have been made to artists such as PJ Harvey, The Cure, White Stripes, Howling Bells and even Joy Division. Whether such connections are justified is of course a matter of opinion but their debut  long player “Boo” is certainly  an album of sweeping majesty , full of darkness and light, of serenity and rage, shot through with a sense of  that  restless wanderlust that has in no small, part informed  Sarah and Jake’s musical vision.

At times the music is brutal and stark at other times tender and reflective. The combination of visceral guitars weaved around the interplay between Sarah’s otherworldly vocals and Jacobs’s sonorous drawl enables “Boo” to take the listener on a road trip in which despair and hope, love and regret often hitch a ride but never outstay their welcome. There’s a definite cinematic vibe running throughout the album, like the soundtrack to your favourite cult road movie.  The guitar work is quite wonderful ,  at times sounding like Echo and the Bunnymen interpreting “Twin Peaks” , whilst on the more laid back lo-fi  numbers they act as sonic thunder bolts and like the presage to a great storm, they slash through the soundscape adding to the foreboding , haunting atmosphere that is the essence of “Boo”.   Dag för Dag have produced a début album to cherish and one that may, in time, be regarded as a mini-classic. We had a chin-wag to the female half of the duo, Sarah, about the bands formation and future plans …

VP:  Ok, I’ll leave the whole  “where did you meet?” question out of this interview ;)  But when did you first start to share a common musical bond and begin writing songs together?

SARAH:  Jacob started sending me mix Cds when I lived in London and he was in San Francisco back in the early 2000s, and I really dug what he was putting upon his ears. Up until then our musical tastes were quite diverse from one another.  Then  in 2006 Jacob moved to London to live with me for a while.  From that point, we discussed making music together but finally began in 2007 when we found ourselves living in Stockholm.

VP:  As brother and sister duo does it make song writing and performing together easier? Can you be more frank about your views with each other?   On the other hand does sibling rivalry sometimes rear it’s head?

SARAH:  The songwriting aspect is so much easier between us than with any other musicians. We feel we speak a sort of sibling language, a silent way of communicating, an all-accepting nothing-to-be-embarrassed about kind of talk. And we share core vales – like a total disdain for pretension in the industry and a desire to release our inner junk through the crystal beauty of music. But yes, sibling rivalry does rear its sometimes nasty head, and we have been known to have all-out shouting matches in front of non-suspecting onlookers…and even grumble and bicker on stage during gigs at times.

VP: Your début album “Boo”  has a kind of sweeping, yearning quality   would you say it reflects your nomadic nature given you are originally from the States and  have lived in Greece , Spain, London  and now Sweden?

SARAH:  Absolutely. Our music is like a painting of the landscape of all our travels, and the day by day reality of our existence as foreigners in our adopted homeland. We both not liking to fit in, not being another face in the mass I reckon.

VP: What was it about Sweden that made you want to “ drop anchor” so to speak?

SARAH:  Sweden is an absolutely gorgeous place, and Swedes have managed to encapture all the fantastic qualities of the different nationalities I’ve come across in my travels. They are friendly but not overbearing. They keep to themselves but help one another out simultaneously. They are incredibly intelligent overall, and most can bake a very decent apple pie or throw together an impromptu meal with finesse, men and women alike. Sweden feels more and more like the home I’ve been searching for.

VP:  What sort of artists past or present would you say have helped shaped your musical tastes and attitude toward to music as a whole? Do you both similar tastes?

SARAH:  We do have very similar tastes. Very rarely do we present one another with music the other dislikes. Jacob has been influenced by folk, jazz, hip hop, Nicholas Mosley novels, early Modest Mouse, The National, The Walkmen. I have been influenced by PJ Harvey, James, Ella Fitzgerald, Echo and the Bunnymen, Nirvana.

VP:  You’ve toured with some pretty impressive bands, what’s been your highlight so far?

SARAH:  It’s impossible to pick out one moment. Every band has been perfect at the perfect time. A Place to Bury Strangers are the nicest guys on the whole planet. And singing ’Knockin’ on Heaven’s Door’ with Wolf Parade on stage in Cologne was pretty epic.

VP:   How do you go about song writing, do you do it separately or write together?

SARAH:  Most is written together in our cavernous rehearsal space. Jacob spends a lot more time there than I do, coming up with some basic melodies and ideas, which he sort of ’presents’ to me. We each write our own lyrics and we have very strong drumming ideas before the drummer even makes it in the door. Dag för Dag is a very Jacob-Sarah collaborative effort.

VP:  What made you settle on the band name Dag for Dag ? What’s the correct pronunciation and what does it mean?

SARAH:  Jacob was listening to a Learn Swedish tape at the gym and heard ’Dag för Dag’, ’Day by Day’. We fell in love with it. The correct pronunciation is almost like Dog for Dog.

VP: What were your favourite albums of 2009?

Happinness, Or We Could Move On

I Hear Hiroshima, Friends with Swords

VP: Five words to describe your thoughts upon waking up on New Years Day to embrace a bright shiny new decade?

“Hand And Knees” By Dag For Dag

“Words” By Dag For Dag

0 thoughts on “Dag Days Are Over… Dag för Dag Interview”