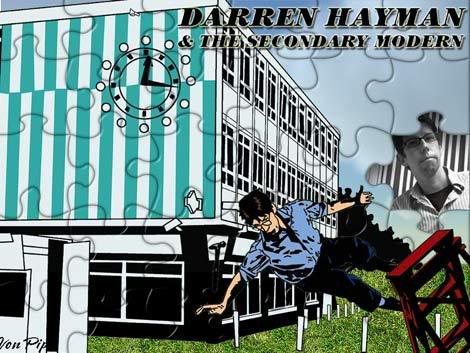 “Losing My Glue” By Darren Hayman & the Secondary Modern

Essex-born Darren Hayman was the lead singer, songwriter and guitarist with Indie rock band Hefner, big favourites of the late, great, John Peel. Since their split in 2002, Darren has continued to produce interesting and thought provoking music and 2009 has seen the release of his tenth career album, the rather clever, rather lovely” Pram Town“.  Upon hearing the title I initially considered the bizarre possibility that this could well be a concept album about a town in my locale,  Birkenhead (aka Hell), a place teeming with an army of charmless, pram pushing Tiffani-Amba’s and Kellie-Jades. You’ll normally find these Burberry clad harridans making their depressingly inevitable Monday morning trip to the local Brook Advisory Clinic, swigging “Diamond White” Cider whilst eloquently imploring  their children, Nike, Beeanca and Chelseigh-Beyonce to “show some F**kin respect” ( if you think this is a rather unfair stereotype try visiting. Actually don’t unless you really have to! )

As ever, I was completely wide of the mark, Darren’s title harks back to a time when the term “Pram Town” was used with jocular affection and had more positive connotations than today’s stereotype. The album itself is centred on a collection of colourful characters who reside within a “New Town”.  These towns were initially designed as residential panaceas to ease the pressure on major conurbations such as London, known as “overspill towns”, they were considered dynamic, cutting edge and exciting.  But the passage of time has not been kind to these brave new settlements and they soon became synonymous with the very things they sought to remedy, neglect, isolation, deprivation, and all that is dull and uninspiring, in essence a veritable  “cultural Siberia”. Hard to believe they really were once a vision of urban utopia, places were “all classes of community could meet freely together on equal terms and enjoy common cultural and recreational facilities”. As such they were obviously a draw to young couples wanting to start a family and must have appeared radical and somewhat futuristic, with their green spaces, roundabouts and community centres. Sound great don’t they? But as Darren says” towns aren’t designed; they evolve. Concrete crumbles and plastic cracks and all the civic amenities in the world couldn’t give the place a heart”

However “Pram Town” is not a vituperous attack on these communities, far from it. Yes, it’s critical but this is tempered with nostalgic tenderness, the albums biggest strength is also its paradox , on one hand “Pram Town” succeeds in revealing  the towns soul , whilst, on the other it also it also successfully conveys the emotional void that can be felt growing up in such a place.  Throughout, Hayman describes his own ambivalent relationship with the aesthetically uninspiring “new town” with warmth, wit and great humanity. He has produced a minor classic, a “folk opera”, which tells a story that can be recognised by anybody who grew up feeling suffocated and thwarted by their environment. It’s full of yearning and shattered dreams in which the miasma of frustration is an almost tangible entity. You can sense both the hope, as Jimmy Stewart might put it, of “shaking the dust of this crummy little town off my feet” and conversely the dissatisfaction felt at residing within the confines of a place devoid of inspiration or ambition, yet still considered by some, as a sort of post war Arcadia . We caught up with Darren for a quick chat about “Pram Town”

VP:    Your latest album “Pram Town “has garnered a favourable reaction since its release, what was the idea behind the album? It’s based on a specific place?

DH: It’s based on Harlow in Essex. I work better when I limit my boundaries and I like songs that are attached to a locality and time. Specific details are things I always like to hear in songs.

VP:  Would you say it’s a concept album, there seems to be a definite story running through it and little details that could be missed if you’re not paying attention?

DH: I would say it’s definitely conceptual in almost every way, from content right through to instrumentation. Yes there’s a definite story, a beginning, middle and an end.

VP:  The Secondary Modern?  Would you describe it as a sort of rotating collective, do you find this keeps it fresh, or do you sometimes miss the stability of  performing and recording with a regular unit?

DH: It’s more a band that has just taken its time to settle on a line up, although Dave Watkins has now played on my last three albums, Dave Sheppard drummed on the last two SM albums, it is starting to feel a bit more like a band now. I miss somethings about a regular band. I miss being part of a gang. Though this line up now offers opinions on how songs should be executed, which is what I want, I never want to be a leader with my minions.

VP:  I read somewhere that you’re already writing your next album, you’re obviously pretty prolific, do ideas just pop into your head or do you sit down and make a conscious effort to write about a certain subject or theme?

DH: I do both, although increasingly an album is something that’s much more thought through in terms of direction and content, though that doesn’t stop random tunes and ideas popping into my head. I wouldn’t say I was that prolific really. I would say, more so, that the majority of songwriters are extremely lazy.

VP: You’ve also said previously that under no circumstances would Hefner reform and that “people wouldn’t like a reformed version”. Is that because you’ve moved on, in effect was Hefner a snapshot of who you all where not who you now are?

DH: It’s none of those things really. It’s more that I’m just tired of the undignified reformation of bands. The words ‘split up’ should stand for something. I would say ‘under no circumstances’ but I would say that I don’t know what those circumstances would be.

VP:  Touring (as opposed to playing live)? Is it something you still dislike?

DH: Yes. As you rightly point out , there is a distinction, when I’m on stage I’m usually happy to be there, but if I never met another soundman or rock promoter in my life I wouldn’t find I was missing any intellectual stimulus.

VP:  What sort of music have you been listening to recently? Any albums from 09 you’d recommend?

DH: I have been listening to Ornette Colman and I have no idea how that will affect what I do next. I think Emmy the Great has made an excellent album. I don’t think anyone is giving her quite the credit she deserves for some of the most intelligent song writing I’ve heard in ages.

VP:  Hefner were always a big fave of John Peel’s, since his passing do you think there’ll be a DJ as influential again, or has Radio become an even more  bland mix of corporate play lists and personality DJ’s

DH: I think it’s hard to expect one DJ to come through and replace Peel. What happened with John, happened over 30 years and he was in a unique position at the BBC. However I think there are plenty of DJs who do great work under his influence. Rob Da Bank, Jon Kennedy, Huw Stevens, Marc Riley to name just a couple.

VP:  What are your plans for the rest of the year?

DH: I’m scared of a Spanish/Austrian/German tour I have booked. There are still a handful of different seven inches and splits to come out. I guess I should try and re-release “We Love the City” by the end of the year.

VP:  Five words to sum up your week?

0 thoughts on “This Is The Modern World- Darren Hayman Interview”