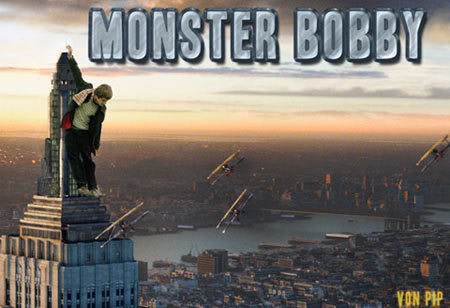 Mention “Monster Bobby” and invariably the response will be something like “Aha! Brighton’s answer to Phil Spector !” or “Oh yes, he’s that Pipettes chap”. But as well as playing guitar and co-writing songs as a member of The Pipettes backing band The Cassettes, Monster Bobby has been one busy geezer. He’s organised club nights, concerts, and produced fanzines (notably “Totally Bored” ) as well as performing as a solo artist releasing mainly limited edition singles such as the excellent “Heaven Hides Nothing”.

On 13th August, 2007 MB’s long awaited debut album “Gaps” is released in The UK via Hypnote Recording Concern (July 17 in the U.S.). The album features “the almost complete absence of any gaps between tracks, each one segued into the next with the aid of field recordings and other assorted noises and soundscapes,” In addition to those noises and sound scapes, “Gaps” features bassoon, glockenspiel, tuba, and cornet. Interestingly the album title is actually not a play on the way the songs fit together,but was titled in advance and somehow just serendipitously came together with no actual “gaps”

In between being mysterious and profound, the Monster that is Bobby took time out to speak to the “VPME” and answer the age old question “ So what’s it all about?”

VP: Where does the name “Monster Bobby” come from?

MB: My flat mate, Lydia, who I lived with in halls at the time I started playing (and the Add N to (X) song that came out around then.)

VP: What are the overall plans for ‘Gaps’? Are you going to tour it? Release any singles off it?

MB: I don’t know. I’m going to the Edinburgh festival for a week to play at a night called folka dots. I think really the overall plans for “ Gaps,” from my perspective, was to record an album of my songs with little bits of field recordings, a real brass and woodwind section that we’ve basically done our best to make sound like a load of synths and samples from old records from the forties, and an awful lot of noise. After that, well…who can say…

VP: Some of the song titles on the album may well be contenders for “best song titles in pop” where do you get your inspiration for such songs?

VP :It’s been reported you’re launching your own record label, any news?

MB: It will be called Little Other Records. It’s musical output will resemble, to a fair extent, the kind of music I used to put on “Totally Bored” compilations, especially Mrs Reed, Bens Pens, Hot Roddy, Les Domestico…maybe a few others…we’ll see…., and it will be run on Lacanian principles (hehe)..

VP: What are your thoughts on the current Music scene?

MB: I don’t really listen to much current music, except by accident. I like Bonde DoRole, yeh, Brazil seems to have a good music scene right now. I don’t really like any of the London bands, lots of good stuff coming out of Sweden last few years mind you…

VP: This year has seen you play Mexico, the US, Glasto, etc what have been your personal highlights?

MB: Missing my alarm clock, running through the streets of Lund, somehow bunking the train from Lund to Emmaboda, jumping straight into a taxi that my friend Nick had booked for me ten minutes before from Emmaboda station to the festival, setting up and sound checking in about three minutes then just about being able to squeeze in a 25minute set before the main stage started going and I got a drowned out (I was, even after all that, an hour and a half late)…seeing Bjork at Glastonbury, the animal collective at Benicassim, and the Wu Tang Clan at “T In The Park…Money Mark wanting to take photos of Seb’s casiotone at the exit festival in Serbia….finding a BBC radiophonic workshop record that I didn’t have on Haight Street, San Francisco….watching sheet lightning illuminate the mountains from a balcony in the Swiss alps.. hearing three chefs sing Corinthian folk songs at the lakes festival in Austria.. Karaoke in New York, Hamburg and Helsinki…. train journeys in Austria and Sweden and Switzerland… the sound of being caught between three competing mariachi bands at a bar in Guadalajara…finn air breakfasts…going home every now and then and watching lots of Hitchcock films…

VP: Who’d win a dance off between The Cassettes and The Pipettes?

VP: Sum yourself up in Five Words

MB: I would prefer not to.

NB/ The VPME can confirm that Monster Bobby is not Phil Spector, and that no aspiring Hollywood starlets were injured during this interview. (Additional thanks to Bright Eyes, Fran The Fan And Mr Cakes

“Gaps” can be Ordered here