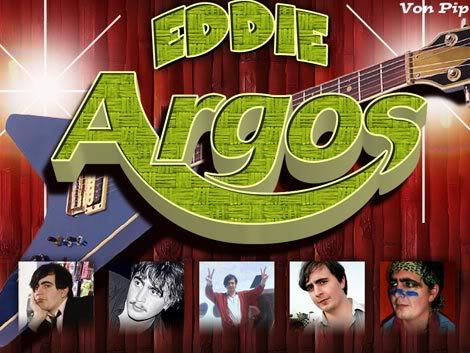 If we discount the unlikely scenario that Scouting for Girls might consider changing their name to something rather more suitable like “Upbeat Inane Radio Friendly Sh*te” then surely it is Art Brut who have one of the most appropriate names in pop. The translation from French means “raw art” and the term was first used by French artist Jean Dubuffet. This was art created by people with no formal artistic training, and includes graffiti, children’s drawings and the work of the insane. Dubuffet saw that this material contained a raw unfettered expression of feelings and visions that had not been constrained by rules and convention; it was in essence, art in its purest form. This description, it could be said, aptly sums up Art Brut and their front man Eddie Argos, Art Brut (the band) are not your average pop group and their songs don’t really conform to the “norm” (whatever that is.)

Their first single “Formed A Band” is about, um..well…, forming a band, its genius lies in its simplicity and surely only the stoniest of hearts could not find such enthusiasm endearing “formed a band! We formed a band! Look at us, we formed a band!” as Eddie goes on to tell us he’s going to “write a song as universal as Happy Birthday” and furthermore he wants to be “the boy, the man who writes the song /that makes Israel and Palestine get along.” Eddie’s songs are full of observational wit, and subjects covered include everyday tales from the urban prairie, to the slightly more surreal, and it’s the honesty within these narratives that makes the humour so engaging. The situations detailed within an Art Brut song never feels contrived, there is no sense that they are being written for a cheap laugh, and Eddie, like Nigel Blackwell, of Half man Half biscuit (one of Ed’s fave bands) can take the obscure and the absurd from modern day life and somehow make the subjects universal. Come on, we’ve all heard a great song on the radio, mid –snog and thought, “This is a jolly good tune, I wonder who performs it, and, would it be appropriate to break from this passionate clinch in order for me to turn the radio up, just a jot, thus enabling me to catch the name of the song/band/listen to the lyrics? “ … “I know I shouldn’t/ Is it so wrong/To break from your kiss/To turn up a pop song “(Pump Up the Volume.)

Not only have they released two critically acclaimed albums (“Bang, Bang Rock n’Roll” and “It’s A Bit Complicated”) but recently to Eddie’s surprise, he became the darling of the New York Bo-ho art scene. Of course with great power comes great responsibility and you’d never find Eddie posing naked on the cover of a magazine, or fighting in public with other bands like that rather narky chap ( Kele Okereke ) from Bloc

Party. Eddie has long since put the (rather entertaining) feud with Kele behind him; he’s been far too busy to be bothered with such nonsense. Alas Kele’s “alleged” anger management/ADD issues have recently come to the fore yet again, and, amusingly have seen the hapless chap recently used as a punch bag by John Lyndon’s entourage. Strange behaviour for a fellow who was once quoted as saying “Public feuding between bands is completely pointless.” Eddie meanwhile has been spending his time in a much more productive fashion, working on his innumerable side projects, which must indeed get “a bit complicated.” In fact he’s just returned from LA after working on his latest venture. We spoke to the great man to find out more

VP: Your first band was The Art Goblins, and legend has it your live shows used to involve you escaping from a sack. What was all that about?

EDDIE: “I maintain the Art Goblins were a Dadaist Art band playing with peoples perceptions of what a band should be, drawing inspiration from the Bonzo Dog Doo Dah band and David Deviant and his Spirit Wife. Jasper says we were just showing off, thinking about it now, Jasper is probably right! I escaped from a sack and also played the vacuum cleaner to distract from my terrible singing voice.”

VP: Tell us about how Art Brut came about, how you all met?

EDDIE: “I was at a party looking for people to form a band with and Chris was there and thought this sounded like a plan –he thought it was a good way to impress the ladies. Chris talked his flatmate Frederica into playing bass, and we got a bass guitar for her off eBay. I had a friend Ian from Bournemouth who’d also just moved to London he used to be in a heavy rock band called Orco and he agreed to join the new band. Then a friend overheard a German man on a bus telling someone how he played drums and worked in “Merc,” on Carnaby Street . So we tracked him (Mike) down and asked him to join the band. He did, fate played the straight man and we never looked back. Chris left a couple of years ago and was replaced by my friend Jasper from the Art Goblins.”

VP: You’ve recently been working on a new project “Everybody Was in the French Resistance ..Now” How’s that been going and what’s it all about?

EDDIE: “Everybody Was In The French Resistance Now” is a side project of mine with Dylan Valdes from Blood Red Arm. We’re recording a pop album in which we reply to and defend characters from other peoples songs (for example we’ve just written a song in which the son of Billie Jean has tracked down his estranged father, referencing and a continuation of , the Michael Jackson song . The album is called “Fixing The Chart Part I” and will be out by the end of the year I hope. Most of it was recorded in Joshua Tree, California, all of it’s being produced by Dave Newton from the Mighty Lemondrops, I think he’s a genius pop producer, I’m very proud of it.”

VP: You’ve gone down very well in America did this surprise you as some consider you a quintessentially English band,

VP: I’ve always found your lyrics very honest, which is where the best humour often comes from, but there are some that think your being deliberately funny. How would you describe your lyrics and what you try and convey?

EDDIE : “ I’m just telling true stories about my life(or occasionally things I’m interested in , for example the Gatti Gang , who are rather inept Italian Terrorists that robbed a bank , I’ve never robbed a bank.”

VP: Who are your favourite bands at the moment and do you have any album/albums of the year thus far?

EDDIE: “My favourite band at the moment is The Mountain Goats; I’m playing their new album “Heretic Pride” a lot. I think a lot of British Indie (if that term still exists ) has dropped to an all new unimaginative low but there are still some very good British bands, Future Of The Left and the 1990’s I think are fantastic, I’m looking forward to both of their albums. Of course I’m still a massive fan of the Indelicates; I’m still playing their album “American Demo” at least three times a week.”

VP: I’m very fond of my pencil thin tache, but why did yours go?

VP: The now legendary “Beth Ditto” style NME cover made quite a splash, how did that come about?

EDDIE: “It was originally and Art Rockers idea put to me to do a cover in the same pose as Beth Ditto. In true Artrocker style they didn’t get around to it and the NME pinched their idea, although I did get ArtRockers blessing first.”

VP: Have you attended or played at any big festivals this year, or have spats with certain bands put you off?

EDDIE: “I don’t “spat”anymore, well not in public. We played a few festivals which were loads of fun and we got to try out our new songs, and we’ve a lot! So it made it even more fun for us!”

VP: What five things are essential when you go on tour?

VP: What’s the last thing that made you laugh?

EDDIE: “The glam revival band I’m in “Glam Chops” played in Weymouth a couple of weekends ago and Paul the bass player was telling someone about it , when they asked “ Weymouth in Dorset ?” And he replied “Yeah I would definitely, it was really good!!!”

Everybody Was In The French Resistance Now

“Pump Up The Volume ” By Art Brut

“Christmas Number One” By The Black Arts