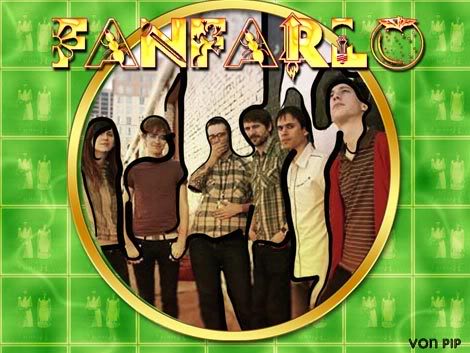 “I am A Pilot” By Fanfarlo

Normally my heart sinks faster than Dawn French ensconced in a leaky pedalo when I hear one of pops elder statesmen tip a new upcoming band for greatness. Morrissey for example has such a woeful track record for predicting “the next big thing” that one imagines he’d have trouble tipping his own hat. Who can forget his misguided patronage of, and gushing praise for, the lamentable yet incredibly accurately named Ordinary Boys? To be fair its not just singers whose judgment is questionable, take Jonathan Ross’s new best mate,  former Creation label boss Alan  McGee and his ludicrous assertions that Oasis are the greatest band that ever drew breath, James Allan is the messiah, and his current hobbyhorse, The Grants, are apparently  the greatest scouse band to emerge from Liverpool since The Beatles.  Unfortunately such over the top hyperbole can actually hinder a bands progress and  credibility (Joe Lean And The Jing Jang Jong anybody?) and is normally viewed with deep suspicion by the music buying public.

So when  news reached me  that a band called Fanfarlo had gained  David Bowie’s approval I didn’t get my hopes up, I mean the mans got taste, but he also he did live in a basement in West Berlin with Iggy Pop BY CHOICE and also considered Tin Machine  a really  good idea.   However a quick listen to Fanfarlo via myspace did leave me suitably impressed, this was quickly followed by a fantastic performance on Manchester’s Channel M recently that only confirmed what a fine band they are, and I have to admit, Mr Bowies got it 100% right!

Fanfarlo’s recently released debut album “Reservoir” is an album of such quality you’d swear the band were seasoned veterans and comparisons to the likes of  the legendary Talking Heads are not, actually, that far off the mark.  The album is without doubt  a lush, soaring melodic tour de force and  has provided my ears with unadulterated aural bliss since its release, it soothes yet excites, is streaked with  melancholy, yet is uplifting, and it’s definitely in  “top albums of the year” territory.   In between supporting Snow Patrol and jetting off to SXSW we had a quick chat to the band, who must be one of the busiest around!

VP: What’s the bands back-story, how did you all come together?

FANFARLO: A sort of mass exodus from the cultural void to the locus of much that is good i.e. London.

VP:  The bands name is a reference to Charles Baudelaire’s short story “La Fanfarlo”, are you all fans? What are you all most likely to be caught reading on the tour bus?

FANFARLO: None of us are huge fans. It’s a pretty little story and the title spoke to Simon at the time. We are all big anthropologists so we tend to read philosophy, history or travel books. Our guitarist reads Heat or Nuts magazine which adds some light relief.

VP:  Your debut album has recently been released- where can people get hold of it?

FANFARLO: Internet, shows or the Music and Video Exchange.

VP: What’s it been like playing massive arenas supporting Snow Patrol, Exciting? Daunting? Has the crowd reaction been positive?

FANFARLO: The rigmarole surrounding the big shows makes the arena shows very exciting. Stepping onto a stage in front of twelve thousand people has no rival, being enveloped by the sound onstage is something you can only get at an intimate gig. Crowd reaction is favourable anywhere we go.

VP:  You’re playing at SXSW again this year? What do you make of it out there?

FANFARLO: Austin is incredible. Think of Camden Town, London transplanted to the middle of Austin, Texas with less crackheads, goths and gross food.

VP:  What inspired you to write a song about Harold T. Wilkins? Can we expect one on Erich Von Däniken in the future?

VP: You’ve gigged tirelessly over the last few years, what’s the most depraved tale of rock n roll excess that you feel able to share?

FANFARLO: There have been a lot of very interesting scenarios due to excess. All of them in Europe where home was a distant memory. Rape was attempted on our drummer by a dwarf in Sweden. That sounds like a lie but is so very true.

VP:  I know the year is still in its infancy, but have you heard any albums released thus far what have made you swoon with joy, and conversely any that have made you want to stuff socks in your ears?

FANFARLO: (Amos Justin)  I personally am into the the new records by BLUT AUS NORD and WOLVES IN THE THRONE ROOM. Great Black Metal, none of which originates from Norway.

VP:  How do you keep healthy on tour , or is it a losing battle, awash with fast food, alcoholic beverages and irregular bath nights ?

FANFARLO: I think we eat quite well compared to a lot of bands we know. Most of us are vegetarians which dictate the quality in a lot of cases. Catering at the big gigs is gourmet. We are being spoiled.

VP:  If Fanfarlo had a motto what would it be?

FANFARLO: “There’s a bit of gay in everyone.”

“Harold T. Wilkins or How To Wait For A Very Long Time” By Fanfalro

0 thoughts on “Next Stop Dawn-Fanfarlo Interview”