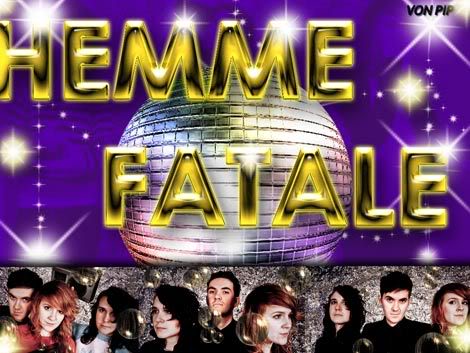 I mean it shouldn’t work should it? A band that claims to be influenced by R.Kelly, Faith No More and American wrestling with a penchant for Prince, Judas Priest, Jay -Z and Saxon? It just sounds a bit wrong doesn’t it? Personally that list doesn’t do a lot for me. I did have quite a liking for “Epic” By Faith No More as a lad, whilst Judas Priest’s “Breakin’ The Law” was quite funny as a bit of “oh golly aren’t I naughty” pre-school rebellion, but the rest , well I can’t say they push my musical buttons. So who the devil would happily list the above as sources of musical inspiration ? Well, the band in question are called Hemme Fatale, and to be honest they do seem, for want of a better word, a little bit “crackers,” their song titles alone would score quite highly on anybody’s Mad- As- A- March- Hare- Cuckoo-O-Meter” (“Hag In A Black Leather” “Baby Witch” and “Peryglus Lucifer.” ) Hemme Fatale don’t exactly give you straight answers either, one day they’ll tell you that their name is a tribute to Christy Hemme of WWE fame, the next day they’ll say “actually we picked it because it sounds like a really naff 1970’s aftershave by YSL” . So maybe I should treat everything they say with a large pinch of salt. Hemme Fatale’s man with the plan, Luke Taylor is also the songwriter/ guitarist for the remarkable Hot Puppies, so this seems quite a departure for him, but when questioned about this he merely states “People are fed up with songs about bus stops and every band sounding like The Jam, I know, I’ve spoken to them.”

So what sort of music do they produce? Well that’s a tricky one , my initial reaction to it was “funky uber sleaze” which seems to fit, for example if “Gavin and Stacy” ever went a bit porno, I’d imagine Hemme Fatale would provide the soundtrack, its sexy and sweaty with a Welsh twist- a bit like Katherine Jenkins at the gym or “Ivor The Engine “, freshly oiled, and glistening with fresh morning dew before a day of work with Jones the Steam at the Merioneth and Llantisilly Rail Traction Company ….. Dafydd Wigley has allegedly described them thus “These young mo’fo’s get me all of a lather boyo.” Whilst Rhodri Morgan is rumoured to have “shaken his tail feather” to Hemme Fatale on more than one occasion after a hard day being Welsh at the Welsh Assembly. I spoke with Luke to see if I could get some definitive answers…..

VP: Who are Hemme Fatale, how did you meet and what is your mission

LUKE : We’re a lover boy pop group from Cardiff: sex city. We met in the uniformally dull and uncinematic way that bands meet, out and about. I knew Jen, she worked at a rehearsal studio, I asked if she knew anyone who looked like a pop star, she said “I know a girl called Ellie”. Then we all lived happily ever after.We aren’t on a mission, we just want to entertain ourselves and others.

VP: How would you describe your music?

VP: Do you have plans to release a single or an album ?

LUKE : We’ve done an e.p that we recorded in my home. It’s free to download on myspace and countless blogs. At some point we’ll make music that people have top pay for, but not yet. When we are ready people will be happy to pay for it.

VP: Did you watch Glastonbury this year ? Was it any good ?

LUKE : Well the current crop of British bands are just awful, even the ones who’s records I like were bad. Jay Z was amazing, and rocked harder than all the indie bands, and the only big name artist I saw who could handle a crowd of that size. I’m glad Leonard Cohen asked not to be broadcast cos he’s my all time hero and I’m seeing him this month and didn’t want to spoil it.

VP: Which artists have had the biggest influence on Hemme Fatale?

LUKE: Prince, real Prince not just “Kiss”. It’s cool to like Prince now. But we like all the old stuff like “The Black Album” and “Dirty Mind”. Everyone laughs but we like the dynamic of De La Soul a lot, that’s what we’re aiming for, but in white, south Glamorgan sort of way.

VP: These days you pop types aren’t happy being in one band, you have to be in a few. Why? Is it partly due to the financial side of the music industry these days , or are your purely following your artistic muse? Is the desire to express your inner pain so compulsive, that you feel you must commence this cathartic journey of self discovery, and ultimately arrive at your own personal nirvana? Or not?

LUKE: Not. It’s when everyone in your other band can’t be arsed and the manager has completely fucked things up. It’s nice to do something motivated purely by fun, sex and dancing. People forget that, that is what rock n roll was born from.

VP: I think the eighties generally were a bit rubbish, why is everyone trying to revive it and why is everything ironic these days??

LUKE: No decade of music is rubbish. The 80’s had shit like Simple Minds but also had Black Flag, Husker Du, Prince, Art Of Noise, Devo and loads more. We play mainly electronic music with synthesisers, this music was born out of the late 70’s/80’s. But it’s progressing, like all forms of pop. But that doesn’t mean it’s pastiche or ironic. Maybe you percieve music that you yourself don’t get as Ironic, but other people care deeply about it. When you go to the Dublin Castle and see 10 bands who sound like Sleeper or My Life Story, are they being ironic?

VP: I don’t consider music I don’t get, ironic, more like a bit…..rubbish. Each to their own  but its frightening to think that there are huge swathes of people who care deeply about the music of, say, Rick Astley or Dollar, and who may not be in some sort of secure  mental institution..these people need our help. I suppose I just find it difficult to sit in complicit silence whilst such artists are now marketed as “hugely influential” and best forgotten cabaret bands are having the title “legendary” erroneously thrust upon them….Ahem… Anyway before it goes a bit Bill Grundy lets press on ;) …..If  you were really “King Of England” who would you lock up in the tower of London ?

LUKE: I would lock you up for getting my bands mixed up, that’s a Hot Puppies song! Ha! Not really, I would lock up everyone on Cardiff highstreet who walks slowly on a saturday afternoon.

VP: Radio play lists? Should they be banned ? Are they a just another tool of manipulation, a not so secret between arrangement big business and radio stations?

LUKE: Well..radio, press and labels are all spunking themselves to death, so who cares. It seems that we don’t get to hear the music we deserve to hear, and bands don’t get any money, and everyone at labels is in a constant state of panic over going bankrupt or being fired. Basically it’s awful, unless, they play us. In which case it’s still awful, but we’re momentarily profiting.

VP: What was the last thing that made you laugh like this “Ha,ha,ha,ha,ha, ha,”

LUKE: That man in Swansea who got stuck in a hole, still drinking a can of Stella. It really made me proud to be Welsh. So so funny. Youtube it. Also I put a hardcore 90’s gay club anthem on my dads phone as a ringtone, and kept ringing him whilst he was watching “Heroes”, that was amazing.