Next weekend heralds the arrival of one of the ‘must go to’ events on the Liverpool music scene’s calendar, FESTEVOL  a two part multi-band extravaganza was dreamt up by Liverpool promoter Revo (or Steve Miller to the taxman) who has been running Club Evol promotions in the city for well over a decade.

This year  FESTEVOL once again takes over Liverpool’s Kazimier Gardens and club serving up a hugely impressive bill running over two Saturdays which brings together some of the best emerging new artists performing alongside established home grown talent.

Sadly this will be the last FESTEVOL to be held at the Kazimier Club which shuts forever on New Years Eve 2015 to make way for …. yes, that’s right yet more flats and generic retail units.  We had a chat to Revo about this years FESTEVOL, leaving the Kazimier with a bang, gentrification and what the future holds for local music scenes.

VP: This year’s FEST EVOL is almost upon us , which has become a staple of the Liverpool music scene during the summer months … What was your initial idea behind it , was it a case of creating something in the city during the festival season, which can often represent a bit of a lull for urban gig goers ?

REVO : I remember coming spinning out of doing Sound City and found myself a bit bored about a week afterwards, usually when you’re promoting tour shows it’s late September through to early April and then the build up to festival season begins. Plus the guys at the Kazimier had told me they were building a garden so it was a case of applying a blueprint from earlier and trying to do something in yes what is a lull time for the urban gig goer and promoter alike. So, like starting Evol because there was nowhere to go I did FestEvol as I had nothing to do…

VP:.It’s also the last one at the Kazimier,which is closing because only a clinical cretin would oppose the view that all city centres need yet more homogeneous coffee bars and luxury flats! Obviously  it’ll be important to go out with a bang so what can people expect?

REVO:  Part 1 is more the traditional format, club and garden stages flip-flopping groups, DJ’s in the alley, and then we’ve been allowed more space for Part 2 and have the use of the Art Academy warehouse next door. We’re installing full production and AV and have Bill Ryder-Jones & Immix Ensemble performing a specially commissioned piece and the Dogshow guys are gonna close with their incredible Invisible Wind Factory show with some great bands inbetween. There will also be a bit of Evol nostaglia on show, posters from back in the day and a photographic exhibition by Michelle Roberts who’s been shooting our shows for 7 years. In terms of expectation, come with an open mind and a pleasant demeanour…

VP: FEST EVOL not only highlights the talent on the Liverpool scene at the moment, but also the diversity, there’s nothing you’d call a ‘Liverpool sound’ , who are you looking forward to seeing this year from the local scene?

REVO : There’s 50 groups playing and there’s that many good groups in and around Liverpool that there probably could’ve been towards 100 if everyone’s available. Things are more diverse than ever, laptop studios, cheap electronic instruments, strong pyschedelics, so many different sounds so what you may have associated with Liverpool in the past isn’t really there anymore and hasn’t been for a while. Time progresses. I have my favourites like The Vryll Society and Sugarmen who I’m pleased to say are doing very nicely at the moment, on the rise. All We Are have put out in my view one of the best albums of the year and when I’ve seen them on the road they’ve been great, at home in the Kazimier, even better. The thing about the line up is, I’d be happy watching everyone if I could.

VP: From further afield you’ve also got Bad Breeding on the bill, who were amazing at Sound City this year, was it their performance in the Baltic Warehouse that sealed the deal to  book them for Fest Evol ?

REVO : No, that was good but I’d made my move following seeing them in a small club in Holland in January and they destroyed the place, a real punk energy and I thought how they’d slay the garden late on like Wet Nuns had when they played a couple of years back. They were the best thing I watched that weekend and stood out a mile apart from the lame indie bands that were jockeying for position.

VP: What are the challenges putting on a huge amount of bands in a short space of time using only a couple of stages?

REVO : Keeping everything running on time and everyone sounding good. Everyone gets to use backline which helps kill set up time and the bands don’t have to lug all their gear around the venue all day long. There’s enough changeover time as the stages are flip-flopping so it’s manageable although a tough day on the engineers who perform miracles throughout the marathon 12 hours.

VP: Run us through your FEST EVOL day …. An early morning bike ride and then over to the venue ……?  Do you get to see all the bands or are you too busy behind the scenes?

REVO : I give the push iron a rest as there’s 16hrs plus to work and I have stay steady. It’s really making sure I have everything ready in the morning, all the details taken care of, breakfast, venue by midday, headline acts start their sound checks around 1pm. There’s a team in place looking after aspects of the venue and stages, making sure we’re all prepped and ready to open on time at 3pm and then riding the wave through to the end. I get to see bits of most of the bands but am usually milling around doing something.

VP: You’ve been a promoter in Liverpool for well over a decade, now  how did you start out and how have things changed in the music world during that time ?

REVO : I started out as a DJ,  learn’t my trade in the clubs and bars of Manchester, moved back home, hooked up with the guys from Ladytron, started Evol as we all deejayed and had nowhere to hang out in town, did our first nights in the basement of EBGBs and here we are 12 years on booking festivals and still going. I’ve witnessed many shifts and changes, fads, things come and go, bands rise from embryo’s to main stage festival headliners, cyclic movements and now finally the industry has settled it’s gaze on Liverpool again…


VP: Back to the Kazimier , It’s grown to become a kind of spiritual home to the local creative scene , what do you think it’s legacy will be and what have been your own Kaz highlights .

REVO : The legacy will be for a time we had our own utopia where we found collective love and freedom from which a community grew that groups emerged from, Dogshow, Stealing Sheep, Outfit, All We Are et al. I remember the early nights the venue put on, truly mind blowing and the Krunk parties were always awesome, next level shit that I couldn’t even dream of as a promoter. The stuff I’ve enjoyed that I’ve put in there are shows like The xx, our first sell out there early on, Caribou was off the hook, Les Savy Fav were unbelievable, Fucked Up were fucked up, Kurt Vile lost himself in his hair, Metronomy had crowd surfing for two thirds of the show, Thee Oh Sees probably the best show in the venue, ever, by anybody, although Battles could be a contender there also. Action Bronson threw it down East Coast style and was a gentleman. It was nice bringing St Etienne to Liverpool and more recently I think the show by Sleaford Mods will go down as a monumental event in our own folklore. I’ve probably missed quite a few, there have been that many, I’ve only ever had 2 bad shows at the venue and must’ve done near 100 there…

VP: Do you share the worries that many have that city centre music venues, not just in Liverpool but seemingly everywhere are being slowly squeezed out and moved out to the margins in favour of gentrification.

REVO : Yes, looking at what’s happening before our very eyes naturally. It’s scary and seems to be a problem we’re facing around the globe in many famous musical cities, New York, Austin, Nashville, Manchester, Sheffield, Liverpool, London. The gentrification of reclaimed areas and the ‘slum clearance’ of the indigenous creatives that originally regenerated keeps rolling on in the name of dull empty apartments that end up as stash and grow houses. You try and stay upbeat about it and hope for progression and new life spontaneously erupting somewhere new but it’s hard, especially when your own life is so entwined in the culture that’s being driven outwards.

VP: Despite the closures how do you see the live scene developing over the next few years ?

REVO :  More independents, more warehouse events and parties, street & park festivals. The Baltic and North Liverpool docks all showing promising signs of life. I feel the city centre may be lost to binge drinking, stag and hen parties and vertical drinking establishments, what’s left is clinging on and the fingers are getting weak. I’m still hopeful a perfect venue that everybody loves will pop up somewhere. I’m enjoying what’s happening in Bold Street though, loads of nice new places to eat, we need to retain the character of that street for sure.. 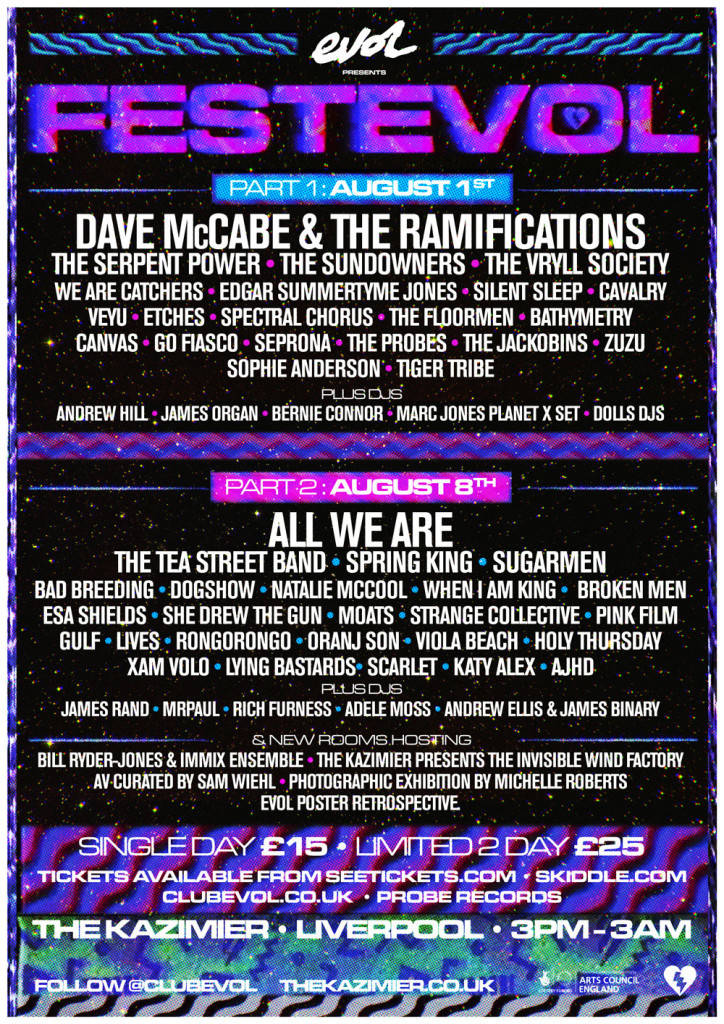