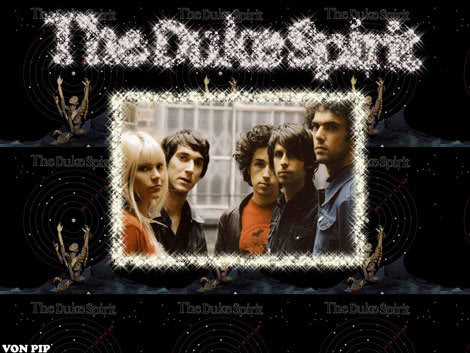 The Duke Spirit have been compared to many great bands , Sonic Youth, My Bloody Valentine, The Pixies, The Velvet Underground etc and such juxtaposition’s are clearly well founded, as the Duke Spirit are truly an incredible band, a veritable force of nature who know their musical history and how know how to rock and rock hard! Initially a three piece rather uninspiringly named “Solomon,”they evolved into to a quintet, consisting of Liela Moss, Luke Ford, Toby Butler, Dan Higgins and Olly Betts. They then gave careful consideration to the wisdom of Solomon being a suitable moniker for a self respecting rock band and after some cogitation became the primal, thundering, crashing, fragile, beauteous, cool as f**k entity that we now know and love as The Duke Spirit . At the outset their incendiary brand of rock n’ roll led to a huge word of mouth buzz due in no small part to their amazing performances, for those who had witnessed the power of The Duke live, where quite simply blown away …. Following the release of their debut album “Cuts Across The Land” in the US , they took on a grueling tour schedule, which may have sent lesser mortals completely barkingly howling at the moon, underpants on head stir crazy bonkers and which included a show stopping turn at the 2006 Coachella festival. This year the band have toured on a slightly saner scale and have been recording their second album “Neptune” with Queens Of the Stone Age and Melissa Auf Der Maur producer Chris Goss. The Duke Spirit are quite simply one of the coolest bands on the planet and 2008 will be their year, of that, there cannot be any doubt…

VP: Although you’ve been performing beforehand is it safe to say that The Duke Spirit came into being in 2003 ? Where did the name come from ? And what was your initial thoughts on what the band should be about?

TB : Yes, Luke, Liela and myself have been writing and playing together since about 1999. We put The Duke Spirit together in 2003 when the band we had before split and a moment of clarity presented itself to us. I guess when something you’re putting all your energy into comes to an end, you naturally re-evaluate your situation. We decided that we actually wanted to write and play rock and roll in it’s most pure and exciting state. We just listened to loads of our record collection and soaked it all up. The name was an accident really. The label were pressing up our first 7″ and we hadn’t decided on a name yet. We were at Simon Raymonde’s office (who was producing our first e.p. with us) and we found it in one of his books. It sounded like a gang or an attitude.

VP: After your debut was released in the US in 2006 you appeared to spend much of the year “on the road” there. Many bands talk about touring the U.S being a test of endurance. due to the sheer scale of the place . Was there ever a time it got a little crazy or you thought you were “losing it”

TB: The album can out in the UK in may 2005, but didn’t get released in the US until march 2006, so our touring schedule was really drawn out. The US is a vast place to tour, mainly because of the distance between each city. So somedays, we’d play a show, leave straight after playing so that we could get 4 or 5 hours driving in. Then sleep for 5 or 6 hours and get up and drive another 9 or 10 hours just to get to the next city in time. That can get pretty exhausting after 4 months. Plus we all like to drink, so your mind does start to suffer after a while, yes. We were falling out with our record label too at the time, so our morale was taking a bashing. It’s a cliche, but we knew if we could survive it then it’d make us stronger…… and we collectively feel pretty tough at the moment!

VP: You have been recording your new album”Neptune” with QOTSA Producer Chris Goss at RDLL in Joshua Tree, and have just released the excellent “Ex Voto Ep” as a taster to precede the album- as well as touring through November-. when will “Neptune” finally surface ?

TB: Neptune will surface at the start of February ’08 (only 2 months away now)! We spent 2 months out in Joshua Tree in the Joshua Tree recording with Chris Goss in Dave Catching’s studio ‘Rancho De La Luna.’ The area, as well as the studio, has an amazing feel to it. The vastness of the sky and the surroundings infuses itself into the whole recording process. Everything had to sound huge, or heavy, or delicate.

VP: What would you say have been the highlights over the past couple of years ?

TB: Recording the album in Joshua Tree was definitely an experience that will stay with us all. We played the Coachella festival in California last year, which i managed to do with a broken elbow. So that was pretty memorable! I think doing a headline show at the Astoria in London when the album came out was my favourite highlight. It seemed to creep up on us, and suddenly we were there playing to a huge crowd in our local venue where we’ve seen so many gigs ourselves. It was pretty surreal and exciting.

VP: Critics have compared you to everything from Nico and the Velvets through to My Bloody Valentine and PJ Harvey but who would you say are your major musical influences ?

TB: We obviously love all those people. It’s a little strange sometimes, because as fans it feels a bit odd being compared to ‘the greats.’ Like they’re putting too much praise on us….. or saying we’re completely unoriginal! I guess those comparisons are just meant to help people who haven’t heard of us know what genre we lay in.
I find it weird to talk about influences, as when I’m writing I tend not to listen to anything at all. Otherwise I find myself ripping songs off, consciously and subconsciously. We use more wide terms when writing and recording, like “make it sound like Ron Ashton” or “do the Shangri-Las thing.” We listen to a lot of old rock and roll, The Stooges, The Rolling Stones, The Clash, Gene Vincent, Nuggets box-sets, old soul like Candi Staton, Erma Thomas, Eddie Floyd, more recent stuff like Spiritualised, JAMC, QOTSA. There’s a new band called The Rascals I really like.

VP: What do you make of the current music scene in the UK

TB: It’s been pretty stagnant for a while now. I’m sick of hearing post-libertines bands, with the exception of a few, like The Arctic Monkeys who are clearly a great band. I’m slowly hearing some good new bands now though, so maybe things are changing. I like The Rascals, Future Of The Left, Creepy Morons.

VP: The Internet and music ? Has it helped or hindered.

VP: So you’ve worked with UNKLE, Chris Goss and The Jesus & Mary Chain , whose next ? Anybody else you’d love to collaborate with in the future?

TB: We’ve just got Teenage Fanclub singer Gerry Love to duet on a song, which was some thing Liela had wanted to do for a long time, they are heroes of hers. It’d be cool to do something with Bjork. I’d love to get Mark Lanegan to sing a song with us.

VP: The Spice Girls Reunion , a sign of the Apocalypse or harmless entertainment for some cash strapped old dears ?

VP: Five words to sum up Leila’s reaction to being asked to sing “Just Like Honey ” live with the Mary Chain….?

3 of the songs (Lassoo, Dog Roses, & MASCA) were recorded
earlier this year at Rancho De La Luna in Joshua Tree, California
with desert Czar Chris Goss. ‘A Wild Hope’ was produced by The Duke Spirit.

“Lassoo” By The Duke Spirit

“Lion Rip” By The Duke Spirit

“Cuts Across the Land” The Duke Spirit