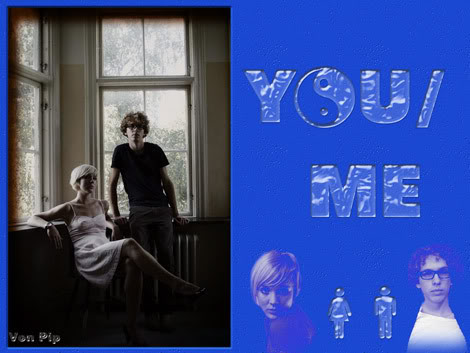 You/Me are a downbeat two piece girl boy electronic from Eskilstuna, Sweden. They first came to the attention of the VPME in spring via the influential Swedish music blog Swedes Please. The combination of Anna Berglund’s seductive vocals and Ander Nyberg’s synth wizardry creates a sombre and epic soundscape resulting in an incredibly intimate experience for the listener.
Influential Scandinavian music website It’s A Trap described them as being the surprise hit of the Emmaboda festival and for “record labels to start queuing” in order to sign them. To date the band have put out one self-released EP entitled Flow My Tears.

You/Me :We met at school in 2003, we both attended the music program, and played together in another band at first, but then decided to form a band that suited our wishes in music better.

VP : What is the population of Eskilstuna and how has it influenced your music and the people you are today ?

You/Me : Recently we have both moved to Stockholm but Anna grew up in Eskilstuna (90.000 inhabitants) and Anders grew up not very far away in a smaller town.
Anna: Eskilstuna is a pretty shitty town, and as a normal reaction to that, you feel like you want to escape, (like most youths who lives in a shitty town) music became my way out.
Anders: in Eskilstuna, 90% of the local bands played Hardcore and I wanted to make music that is as far away from HC as possible.

VP: The lyrics in your songs are incredibly intimate, which is unusual for synth based music as the genre normally features throwaway or meaningless words. Are the lyrics all influenced by your own personal experience?

Anna: YES. I don’t sit down, thinking about what lyrics to write, the words often comes to me at different places, like the supermarket or when I’m walking to buy cigarettes, so I guess they are taken from my own perspective on life, my experiences and my subconscious. and of course I get inspired bye all kinds of stuff, like samurai-movies or old relationships.

VP: Since playing the Emmaboda festival a number of UK tastemakers have been quick to sing the praises of You/Me. Notably Monster Bobby (of The Pipettes), Ricky Haley (of Liars Club fame and whose Alt Delete label put out the first New Young Pony Club single) and former VPME interviewees Tack!Tack!Tack! (who were instrumental in bringing Those Dancing Days to the wider attention of the Swedish music industry.)
With this in mind can we expect to see you in the UK anytime soon?

Anders: yeah, we have been thinking about it, and recently we have been in contact with Nick Levine (T!T!T!) but we have no Idea what the future holds, so maybe yes maybe no, we’ll see. but hopefully.

VP: I see you are playing Italy later in the month. How did that come about?

Anna: It’s a contact that we made at the Emmaboda Festival this year and we are really exited about it.

VP : “Through Four Kinds” is by far the most upbeat track on the Flow My Tears EP. Its tone is totally different to the rest of the material. Does this hint at a possible future direction for the band?

Anna: “Through Four Kinds” is one of the first songs we made, but I don’t really agree with that its so different from the other ones, when we write our music we don’t plan to make a “uptempo song” or a slow one, it just happens by itself, as the song gets made. but sure there will be songs you can dance to or listen to when you drive around in your car.

VP : Do you have any other releases planned in the near future?

Anders: Yeah! We are working on some new material, but we are still looking for a label. soon we will have material for an album, and as soon as we find someone who wants to release it, we will.

VP : Sum up yourselves only using five words?