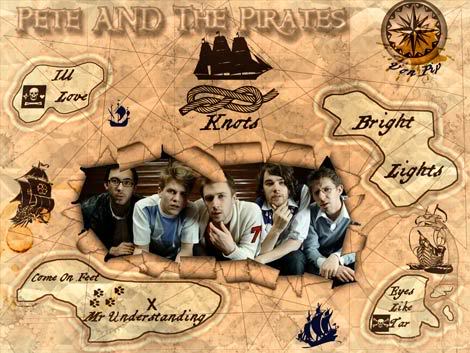 “Mr Understanding” By Pete And The Pirates

Well, well, well, Radio 1’s head of music -George Ergatoudis has rather belatedly declared he wishes “to f***ng stop “pop” being a “dirty mutha f***ing word”. Hmmmm?.. not the most original statement is it? What’s that you hear? Ah yes it’s another bandwagon Radio 1 are belatedly attempting to board -finger firmly on the pulse as ever, plenty of bands have been banging that particular drum for quite some time now. Radio1 eh? They arrive at the party two years too late, wearing a pair of crushed lemon nylon flares, replete with matching cravat and “Watneys Party Four’s” tucked under each arm. As usual its a case of “too late mate, everyone’s copped off.” Worryingly Ergatoudis appears to believe Supertramp/10cc tribute band – The Feeling are “pop” and bizarrely are “influential”. Apparently this is the “New Pop” (Sorry Nu-Pop), Ergatoudis’ insists that this is a return to the days when bands wrote songs and played instruments-Although quite where that leaves “pop” darlings Girls Aloud, is as baffling as Ashley Cole’s infidelity (what a strange, strange man, when you can have pheasant I can’t quite see the appeal of a greasy tub of KFC ) but the Milli Vanilli reunion has definitely been put on hold.

There may however, be unforeseen side effects in such rebranding, and reappraisal of this “genre,” like the presage to a great storm there is a dark cloud on the horizon. Disturbingly I have noticed a number of TV shows are conspiring to rewrite the past. You know the sort of programmes, nostalgia based schedule fillers, involving “loving” or “putting on trial ” a particular decade. It usually involves ex-Yoof TV presenters possibly called Andi or June, a music hack (who last wrote anything insightful back in 1972) to add gravitas and the obligatory unfunny northern comedian “Remember rain, eh? Eh? It was wet in them days weren’t it; it came from t’sky …oh aye!! ” (cue knowing look to camera.) They then proceed to bequeath us with their wit and wisdom on what the said decade was really like, hence, the history of pop is rewritten to fit in with their vapid uninspired musings. I mean come on!! Is the 80’s really defined by Toby Anstis’ view of it?

But what of this dark cloud? What can it be? Let me explain; – horribly such shows are attempting to shamelessly rewrite the legacy of the lobotomised stylised “fun” that was……. Stock…… Aitkin and Waterman, a spirit crushing yet rather apt soundtrack to Thatcher’s Britain, a world which was devoid of heart or soul, but was infused with that much admired 80’s virtue- cupidity. Nowadays its bad enough that we have camp panto villain Lord Cowell Of Smugsville, or Sharon “Bleeding” Osborne portraying herself as some sort of mumsy Vera Lynn national treasure type, without encouraging these three horsemen of the pop Apocalypse again. Believe me, I was there, it wasn’t fun, it was the sound of the Devil trying to master Rolf Harris’ stylophone, whilst falling down the stairs and landing on a cat. Imagine drinking gallon upon gallon of fizzy pop, then being strapped into a rollercoaster whilst being force fed candy floss again and again and again. Eventually you vomit onto said candy floss, yet still the puke soaked; gooey, fetid, sugary mess is forced into your mouth. That ladies and gentlemen is a visual representation of the kind of nausea S.A.W’s music can induce.( It wasn’t “fun” it was utter sh*te, British Motown? Sinetta? Mandy Smith? Sonia ? Sabrina? Jason Donovan? Do me a favour! ) Lets hope Radio 1’s revamp will not give license for these soulless business men to return to the fore with their “Venture Capitalist Pop” But will Radio 1’s stance really change anything or is it just window dressing ? If you are a group of lads with guitars in 2008 will Radio now 1 decree you “Not pop enough?” – I certainly hope not, surely the idea of a revamping the play lists won’t stop the likes of bands like Pete and the Pirates catching the public’s ear this year. Pop or Indie? Who cares? They have great tunes that lift the spirit and make the world seem a happier place. Their excellent album “Little Death” has enough pop hooks, fun and loud guitars to satisfy all ears. Think Weezer with maybe a rather small nod to The Frank and Walters. They’re a band whose chances should not be blunted by a Radio station desperately trying to be seen as relevant and “down with the kids”. Let’s hope the good music will out. We had a word with these scurvy dogs (well Davy Pirate) to find out if they were about to give the music world a jolly good rodgering

VP: How did it all begin, what’s the story behind your formation?

Davy Pirate: “We lived very nearby to each other as we were growing up, and would hang out in the sun in the summer, and before we knew it we had formed a band.

VP: Your excellent new album “Little Death” just been released, did you enjoy recording it and are you pleased with the results.

DP: Yeah recording it was very memorable, quite an intense but happy experience, we co-produced with Gareth (Parton) and yep it just was a very creative and fun and hardworking time. I am very happy with the results I think it perfectly captures us as a band at that time and shows the songs how they are meant to be and sound.

VP: Will you be promoting the album with a large publicity campaign ? Shows in every corner of the UK ? Acrobats? Tim Curry dressed as a clown ? Ladies wearing suspenders, etc

DP: Yeah,we kinda have been since last year, constantly playing as many shows as possible, and we did an in-store show on the day it was released which was surreal but fun.

VP: Apart from chatting to me, what have been the highlights of your time together thus far?

DP: Recording the album was great fun, going to SXSW last year, playing the Reading festival, were all very much highlights

VP: How would you describe your sound?

VP: Bands often talk of finding other ways of making money around music, as the digital age has made music more accessible, cheaper and erm freer. What’s your take on the music bizz as a young band starting out?

DP: I think before we were in a band we were all fairly aware of the potential pitfalls of the music bizz, but it was never really an issue, the reason we formed a band was to write songs together and play shows together. So the music bizz doesn’t really change that, we still do it for the same reasons, its pretty much all we can do, so the money thing is kinda by-the-by, it would be nice to make a living from making music, but it certainly shouldn’t the driving force behind making music (there are many easier ways to make money-e.g. an office job)

VP: What do you make of the numerous band reunions that have come about in the last couple of years? Do you think Oh Bugger off you’ve had your time, let us have a go or are there bands your glad to see back?

DP: I guess I don’t mind if the bands reforming are bands I like, it’s probably not the best way to see an “old great” y’know, would be better to have seen them in there heyday. Sometimes it can seem a bit lame really, like why bother? Having said that I saw the Pixies a year or two ago (having never seen them live before) and it was fantastic, and if Pavement were to reform I’m sure I’d be snapping up a ticket.

DP: I guess not, its not something I’d do- but each to thier own.

VP: Music on TV, why are the few music shows on TV terminally naff. Should “The Old Grey Whistle Test,” “The Tube” and “A Handful Of Songs” be revived? Surely there’s a gap in the market there?

DP: Music TV ? Hmmm, who knows? I guess the way from stopping it being shit, is to have better bands on. If the music’s good its hard to mess it up too much…

VP: Peggy Sue and The Pirates?? Who arrived on the scene first? Did they nick your name? are you the guilty party or is it all a cosmic coincidence ?

DP: They nicked our name, and a guitar and a drum kit from us…secretly though it was a coincidence and they seem very nice indeed, annoying huh? (Ed:-yes ! )

VP: Five things you hope to achieve this year?

CDS AND VINYL AVAILABLE NOW
Click on images below.

13 thoughts on ““Hidden Depps” ..Pete And The Pirates Interview”