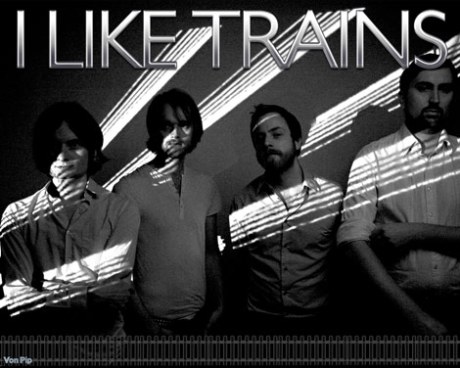 Forget about the contrived, comic book- faux-gothic demeanour and sub-standard Bauhaus karaoke caterwauling of bands like The Horrors, if you’d prefer a truly grown-up journey into the heart of darkness then you need look no further than Leeds band I Like Trains. They are a band whose music evokes a sense of doomed grandeur which is full of lush, sweeping orchestration, epic swirling guitars, and the sort of brooding vocals that makes Nick Cave sound like Miley Cyrus on a sugar rush. It’s wonderfully dark, literate music which has led to them being described as “library rock” due in no small part to their obsession with historical characters. For example an early release ‘A Rook House for Bobby Fischer’ dealt with the controversial life of chess grandmaster and one time Hitler-aficionado Bobby Fischer, whilst ‘Terra Nova’ detailed Captain Scott’s famous doomed Antarctic expedition of the same name. Slightly more interesting and cerebral than the boy- meets-girl-boy-gets-girl school of song writing I’m sure you’d agree!

Their debut album, 2007’s majestic ‘Elegies To Lessons Learnt’ saw the band continue their love affair with the all things historical with an ambitious ‘Noir-de-force’ that attempted to highlight how we as a race often neglect to learn lessons bequeathed to us by history. The album dealt with subject matter as diverse as the Great Fire of London, the Salem Witch Trials and the tale of the only British prime minister ever to be successfully assassinated (sadly not Thatcher),‘Spencer Perceval’.

It’s been over 2 years, since ‘Elegies To Lessons Learnt’. A period which the band describes as akin to “riding a roller-coaster in slow motion, with the highs and lows stretching out over the last couple of years.” But the band have been recording their 2nd album and have also hinted that it will be a departure from all that has gone before. “We wanted it to be different. We started out by deliberately not writing in swing time, not using so much reverb and delay on our guitars, and not having such rigid historical themes connected to the songs.” If 2009’s single “Sea of Regrets” is anything to go by it should be something very special. We spoke to singer and guitarist Dave to find out more about album deux.

VP: How did I Like Trains meet up and what was initial vision ?

DAVE: Our story is pretty unremarkable. Guy and I have known each other since high school. We played in a band together and grew up discovering a lot of bands that have come to influence us. We have been making music together for over 10 years, which is a scary thought. When we arrived in Leeds to study we immediately started looking to put a new band together. We met Simon on our course and Alistair through friends and the rest is history. Our initial vision was quite different to where we are now. We were thinking acoustic guitars and folk songs. Perhaps that is where the story telling element to our songs came from. Anyway our sound changed over time and we became what we became.

VP: You’ve been described as a band ‘obsessed with history’, how do you choose the subject matter for your songs ?

DAVE : The ideas come from various sources. Books and newspapers for example. As we became known for writing these historical songs the themes began to find us. People would ask us if we had heard of this person or that event, and we would go away and do some research.

VP: What other music/musicians do you consider to have influenced your sound and indeed your approach to music?

DAVE: All sorts really. We’re at a point where I think our sound continues to develop, and artists continue to influence us. I think that important influences in the past, ones that drastically changed the way we sound have been Sigur Ros and Godspeed You! Black Emperor. Nick Cave and Morrissey gave me a great appreciation for lyrics. In making our new album we have been referencing Low, Mew, The National, Radiohead and Wild Beasts.

VP: You have almost completed your second album, the follow up to ‘Elegies To Lessons Learnt’’. Can we expect historical events to loom large once more?

DAVE: Not really. One of the big changes for this record is in the lyrical theme. I am trying to be a little more cryptic with my words. I’d like people to make their own interpretations before I start talking too much about the meanings. I will let on that this record concerns itself with where we are heading to as opposed to where we have been.

VP: I imagine the bulk 2009 has been spent recording the album but you’ve also played a number of big shows, what have been your highlights?

DAVE: We started 2009 supporting the Sisters of Mercy in Europe. It was our first experience on a tour of that size. It was fantastic to play in these big venues to people that had no preconceptions of us as a band. I think we won over some new support. We also played at Latitude Festival which was a massive pleasure.

VP: What can the uninitiated expect from an I Like Trains live show?

DAVE: 4 or 5 handsome/hairy men playing the rock music. We’re probably not as miserable in person as people would expect!

VP: It was recently reported that live recordings entitled ‘Hope is Not Enough’ had been leaked claiming to be the new album, it wasn’t of course, but what are your opinions on file sharing and album leaks?

DAVE: Hmmmm. This is a tough one to answer. To pass off live recordings as our new album was slightly ridiculous. Whilst most people could see through it straight away it seems to have fooled some people. We saw a message on last FM reporting that the new album was badly recorded. One of the songs included on that compilation is a very old unrecorded song that predates our first releases! We even saw someone selling copies of it on eBay which I think is really low. On a positive note, it is good to know that people are hungry for new material. We haven’t been precious about fans sharing live recordings. We’re happy for that to happen, but to pass it off as something it isn’t was a little frustrating. I would rather our album didn’t leak. I would rather it wasn’t downloaded illegally once it has been released. People will argue that it might encourage them to go to a live show that they wouldn’t otherwise, but most bands these days provide enough free material and tasters for those interested to make a decision on whether or not it would be something they’d enjoy. It takes time and money to make records. Less time and money makes for a reduction in fidelity and arguably creativity. Whilst that might not worry the majority of people listening to music on mobile phones and laptops it doesn’t bode well for the future of good sounding records.

DAVE: Too get our album released as soon as possible and then to hit the road. Other than that I would love for us to get into sound tracking films.

VP: Tell us about your fans known as ‘Railcard Holders’

DAVE: The Railcard Holders are no more. It was an imaginative title for a fan club essentially.

VP: As you’ve become know as a band that takes a more literate approach to songwriting than some , what are your five favourite books?

DAVE: Ah ha. This is where I come unstuck. I have never had an appetite for the ‘classics’ and I rarely read a book more than once. Alistair would be able to answer this question in such a way as to make us look really well read and worldly. Over the bands lifetime I have mostly been reading biographies and books about history. For anyone with a passing interest in the art of recording music, I would recommend ‘Perfecting Sound Forever’ by Greg Milner. It might give people an interesting insight into how the art of recording records has changed over the years, and not necessarily for the better! The other book that really sticks in my mind is ‘And the Ass Saw the Angel’ by Nick Cave. He paints a vivid picture of desperation and injustice in almost everything he does. I have recently enjoyed ‘Men Who Stare at Goats.’ I have yet to see the film. That’s only 3 books. Sorry.

0 thoughts on “Tracks Of My Tears- I Like Trains Interview”