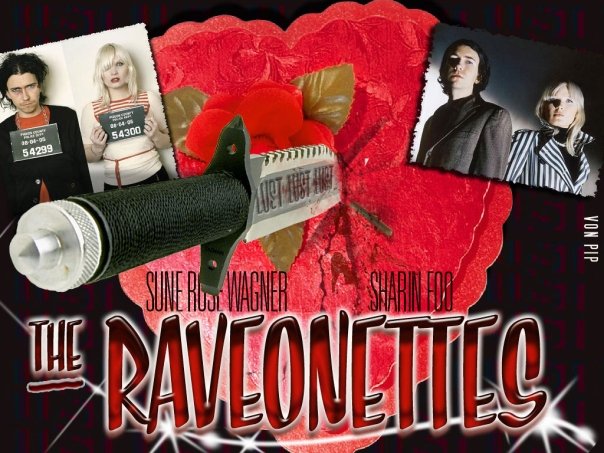 Danish duo the Raveonettes (Sune Rose Wagner and Sharin Foo) have been producing their glorious “Great Love Sound” since the early 2000’s.They are one of the few bands around who have managed to adroitly update the surf pop -boy/girl harmonies of the 50’s/60s whilst retaining the classic style of songwriting of that era. They have also succeeded in making it sound unique, contemporary, majestic and full of adrenaline fuelled excitement, there’s a kind of effortless natural grace to their sound, a sound that manages to shimmer with beauty yet glower with menace in equal parts. Scratch below the surface of The Raveonettes seemingly innocent sounding pop and you’ll discover a dark underbelly of scuzzy- vampish-trash-can-nostalgia drenched Americana, littered with shattered dreams and tear stained pillows. This is the world of“Whiplash Rock n’ Roll” where for every sweet pony tailed girl there’s a bad ass guy from the wrong side of the tracks waiting to break her heart, and just beneath the respectable veneer of poodle skirts, bobby socks and saddle shoes, you’ll find leathers, stiletto heels and motorcycle chains. It’s the post millennium “wall of sound,” complete with thundering percussion, layers of reverb, distortion and feedback all underpinned by some the best pop hooks you’re likely to hear in this world or the next, it’s the sound of Phil Spector discovering The Jesus &Mary Chain it’s the “place where lost is found, That Great Love Sound”

“We sound like a big melting pot of everything we always thought was really great,” says Sune Rose Wagner, singer/songwriter

Their latest album the self produced “Lust, Lust Lust” is vintage Raveonettes, it’s full of joyous melodies which mask the darker themes within, lyrically this could be their starkest album in terms of subject matter, but musically it’s a glorious full on trip through the “dark night of the soul,” which is perversely uplifting despite its dark proclivities. It is of course, accompanied by the trademark Raveonette guitar work that provides the aural equivalent of shooting stars illuminating the landscape with an incandescent beauty, whilst hushed, hypnotic vocals whisper,“I fell out of heaven, to be with you in hell”…Sune and Sharin always give the impression that they have looked behind the façade of the pristine white-netted windows of respectability, and all has not been sweetness and light.

Along with their stylistically romantic view of vintage American pop culture there’s always been a miasma of bruised sexual energy and more than a suggestion of something a little sinister and sleazy lurking beneath the surface of your average Raveonettes album, maybe this is what makes their take on 50’s/60’s pop, edgier and more real than the jejune revivalists who seek merely to duplicate the sounds of that era….

Oh and the fact that Sune and Sharin are a couple of fucking musical geniuses!!

VP: Can you tell me the story with regard to the formation of the Raveonettes, how you met, what prompted you to form a band, your initial musical vision/ethos and the where the name came from?

SHARIN: The Raveonettes was formed back in 2001 when Sune came back to Copenhagen after traveling and living in the US for a year. He brought a suitcase full of new tunes and a vision of a band that had the boy girl vocals in front. He asked me if I wanted to join him and that was how it all started. The name is a reference to Buddy Holly “Rave On” and the girl groups from the early sixties “ettes”. And it was sort of inspired by a girl’s name: Ravonelle that Sune came across on one of our relentless finding-a-band-name trips to the library.

VP: Your new album “Lust Lust Lust” has just been released in the UK and it really is as amazing as I’d anticipated!!! It’s got all melody and power of previous albums, but I did read somewhere that you considered it to be darker than your previous efforts?

SHARIN: Yes I think it’s the darkest album that we have done so far, it has bleakness to it in the themes and the sound, but it’s still very romantic like we always are. It has the minimalism and rawness of Whip It On, but it is much more introverted. Whip It On is ultimately a party album. Lust, Lust, Lust is the least celebratory album we have done, and the most personal one I think.

VP:You certainly seem to be an extremely hard working band and have again been gigging relentlessly. What have been the highlights of 2007?

SHARIN:The highlight of 2007 has been to finish the album. with regards to playing shows… I think my personal favorite was a show in Berlin back in November. It was one of those nights where everything connected and I felt like our music was the perfect soundtrack to an evening in Berlin.

VP:You’ve been compared to many great bands/artists from the Phil Spector sound to the Velvets to the Mary Chain. Who would you say where your musical heroes /inspirations?

VP: On your 3rd album “Pretty In Black” you had Ronnie Spector guest on “Ode To LA”.How did that scenario arise? Was the song written with her in mind? Did you approach her….??

SHARIN: Our producer Richard Gottehrer approached her on our behalf and luckily she loved the song. It wasn’t necessarily written with her in mind, but it emanates the era she came from musically. We were a little worried about whether she would be up for singing homage to LA since she does not have the happiest memories from that place, but she gave it all she had. Needless to say we were very star struck and extremely flattered to work with her in the studio.

VP:What where the first records you purchased?

VP: The digital age; – downloads, streaming music/myspace/ last FM / 1000’s of on line radio stations…Is this making music more dynamic and more accessible, and if so does this spell the death knell for “corporate rock”… alternatively is it making it harder for bands to earn a living?

SHARIN: It might make it more difficult to make a living, and the industry of the old world is on a downfall, but music is not and people seek out new bands more than ever since it’s all so accessible. It might be more difficult to rise above the noise, but we embrace it and we’re still exploring the possibilities of communities/myspace/internet etc and a more direct communication with the people that enjoy our music. It’s exciting times.

VP: Is the current music scene in good health or in need of a full medical? Any bands you’d recommend?

SHARIN: There is some good stuff out there. Liars, Panda Bear, MIA, Black Angels, Autolux to mention a few.

VP:So, you are originally from Denmark and have been based in a number of different cities, London, LA, New York, Do you feel experiencing different environments has helped you develop as a band, broadened your horizons and so forth…?

SHARIN:Yes that was the whole point of moving out of Denmark for a while, to find inspiration and to add some perspective. Coming from such a small and civilized country of only 5 million people, the multi- cultured and chaotic metropolitan cities of the world are utterly fascinating.

VP: I’ve often felt that your music, at times, has an almost cinematic quality, would you like to do a big Hollywood score in the future? Are you movie fans?
If so what would you say are your top three movies?

SHARIN: Yes a score is definitely on our to-do list. And yes we love movies and find a lot of inspiration therein. My favorite movies as of present are: “Dead Sound” Live In A Cab In London ! -The Raveonettes

“Love In A Trash Can”-The Raveonettes

“Attack Of The Ghost Riders” -The Raveonettes