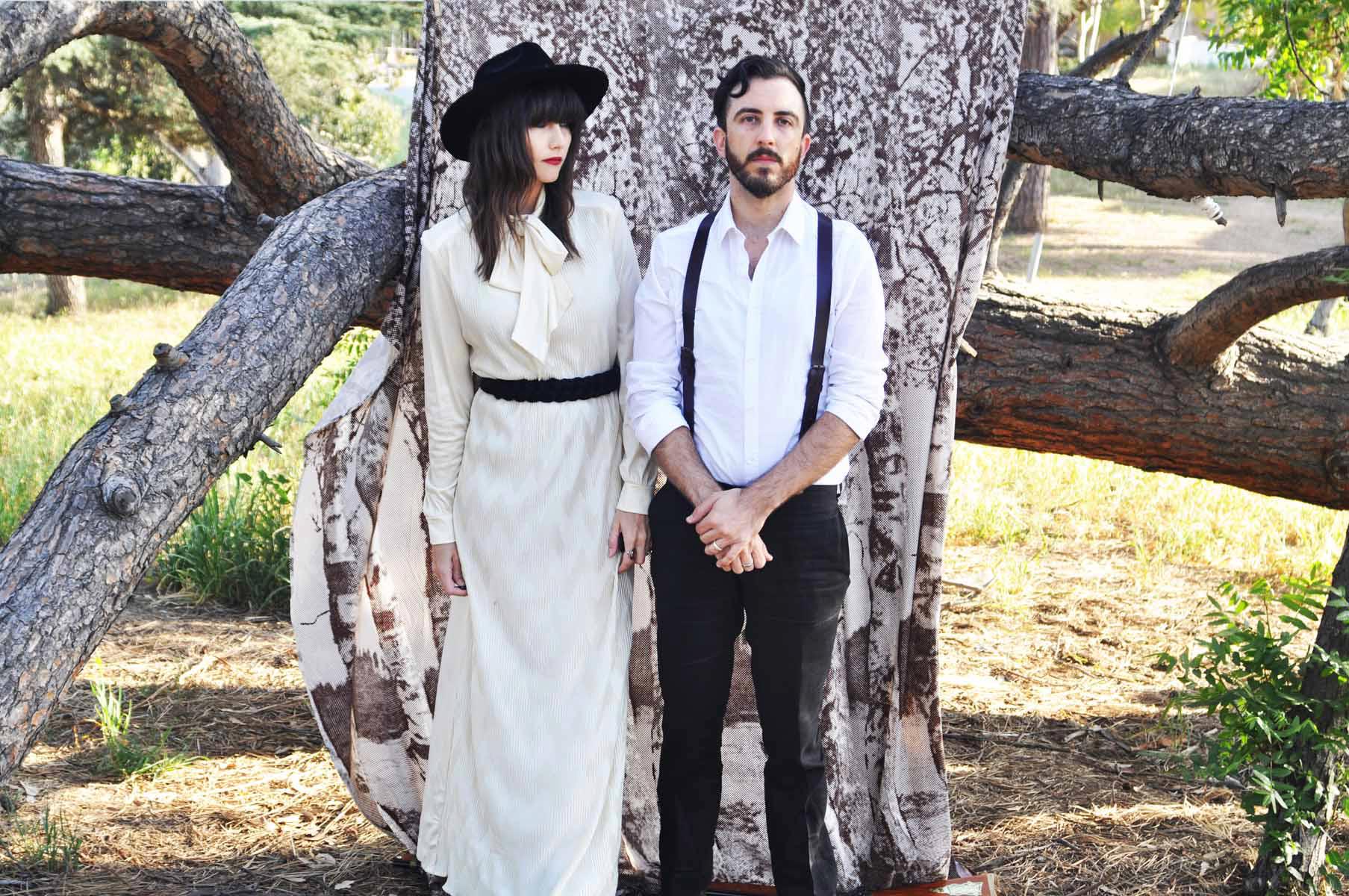 You should never, to quote the old adage, judge a book by its cover or indeed a band by its appearance. Angela Gail and Jeffrey Jacob, the creative nucleus behind Echo Park based duo In the Valley Below may look like characters from ‘The Crucible’ made flesh, or extras from the movie ‘Witness’, but really, there’s nothing dated or twee about the lush, layered hypnotic soundscapes they weave.

The bands most recent EP “Hymnal” wonderfully encapsulates their many qualities, beautiful otherworldly melodies mask something darker and like all great music there’s a yearning, mournful aching quality that runs through the narrative of many of their songs. Juxtapose this with soaring life affirming melodies and the result is ethereal dream pop of an almost incandescent beauty. The EP’s title track, ‘Hymnal‘ views the Doors ‘Riders On The Storm’ through a cracked Lynchian pop-noir mirror, the anthemic ‘Last Soul’ is The School Of Seven Bells channelling Nick Cave whilst ‘Palm Tree Fire‘ is a dark slow burning torch song, full of dark poetic imagery gorgeous harmonies and throbbing beats.  Having caught In The Valley Below’s cinematic, elegiac celestial majesty live, at the recent Dot to Dot festival in Manchester, we decided it was time to get some more information on this enigmatic and hugely talented duo.

VP:  We’ll Kick off in time honoured fashion with the – “how did you meet question”- So, how did you meet?  How did In the Valley Below evolve and how long have you been together as a band?

JEFFERY: Angela and I met as we had both moved to LA separately to do music and met through mutual friends on the music scene playing in bands around town.  We were both in a band before, which was a bit heavier sounding, Angela played bass, I played guitar, and there was a different singer.  We became friends and decided to write together, more as a little side project, just to see what we could come up with.  It was more for fun initially, than anything deadly serious, but people started responding to the songs.  So we recruited some friends and put a band together, we’ve been playing live for about a year now.  The response has been really great. The band name itself was something Angela came up with and it just kinda felt good so we went with it.

JEFFERY : Yeah we did , and yeah we played a mad number of shows there, I’d actually been before but this was the most frantic, high velocity experience I’ve had yet. Nevertheless, that’s all part of the experience and we had a great time

VP: The back end of last year you released two videos “Take Me Back” and then “Palm Tree Fire” directed by – Laurent Michel Moreau –  it kind of looked like a John Webster Death Tableau – meets Wagon Train – where did the narrative come from , what’s the story behind the videos.

JEFFERY: Y’know that was mainly Laurent’s idea, he kinda pitched the concept and we were on the same page visually so we bounced ideas off each other, but it was certainly his initial inspiration. It was a good collaboration, with a great twist although I’m not sure any of us have a definitive answer to what was going on in the videos, although I have my own interpretations!

JEFFERY: It will be on the full length that is due this fall, don’t worry!

VP:  And your stage outfits, how would you describe it …’ Pioneer Chic?’ what’s the inspiration

JEFFERY: Yeah we actually call it ‘Quaker Chic,’ that’s our style, but Angela’s the fashion guru really, she had the vision for our look and she kinda tells us what to do. Maybe the guys in the band aren’t as fashion conscious. She actually collects vintage dresses, so that was kind of the starting point for her look , and then we extrapolated that into the men’s realm . We’d picked up a pair of brown leather men’s suspenders; you call them braces in the UK?


JEFFERY: Haha, we learn the hard way, erm yeah so we picked up some brown leather braces in Vermont and we decided to incorporate that into the look.

VP: So 2013 has also seen you visit the UK for the first time, how did you enjoy it – what have the crowds been like?

JEFFERY : Really enjoyed our time in the UK this year, our tour with Kodaline was fun but we were a strange pairing really, so there were a lot of confused faces when we came on stage!

VP:   People are always interested in what makes bands tick, and the seemingly magical alchemy known as song writing, how do you both work that, do you start off separately or work together initially?

JEFFERY : Its defiantly a collaborative effort, usually one of us will have the spark or idea for a song and then we both bounce it off each other until we have something we  are happy with .  We both have a pretty diverse range of musical inspirations but we try to bring in things from outside the realm of music such as poetry, literature etc. Kind of whatever sparks an idea is fair game for musical inspiration for us.  We like very dense lush musical soundscapes which I guess comes across in the sound

VP:  What are your plans for the remainder of the year? An Album ?

JEFFERY : Yeah we are in the midst of finishing it up, when we get back from touring it’ll be nice to concentrate on getting back in the studio. We produce all our own music , we have a modest studio in Los Angeles and work with a mixer who “gets” our sound and puts a nice polish on it.

VP:   What would you say are your ambitions for the band at this stage?

JEFFERY: Well, worldwide domination wouldn’t be a bad thing …. But seriously we’re really happy doing what we do, so hopefully that will continue. Nevertheless, I think anybody who says they don’t want to be big is being perhaps… a little modest …

VP: Had an odd experiences as a band you’d care to share ?

JEFFERY: On our way out to SXSW, from LA to Austin it’s about a 24 hour drive. A lot of the time, you’re driving through pretty much nothingness for a long time but because you’re so close to the Mexican border you have to go through a border control check point. So they check for illegal immigrants and narcotics etc , and we’d brought our sound guy along, who’s actually originally from Wales but he’s been living in the States for a long time. Anyway we were driving through the checkpoint at about 3.00am after playing a show in El Passo. So the border patrol guy shines his torch in and asks if everybody here is a US Citizen? And our sound guy just says “no” – and they border guy looks confused and says, – “do you have any paper work ?” And our sound  guy again just says “no,” so the Border Patrol guy says, “well you gotta come with us!” So it’s the middle of night in the middle of nowhere and they take him away and tell us to move on. We had literally no idea what they were gonna do with him.  So to cut a long story short he spent three days in a maximum security detention centre and was almost deported back to Wales !  Somehow he convinced them not to deport him, but we were sweating for a few days !  The Lesson ? – Be careful when you drive through Texas folks!

VP:  Five words to describe In The Valley Below?