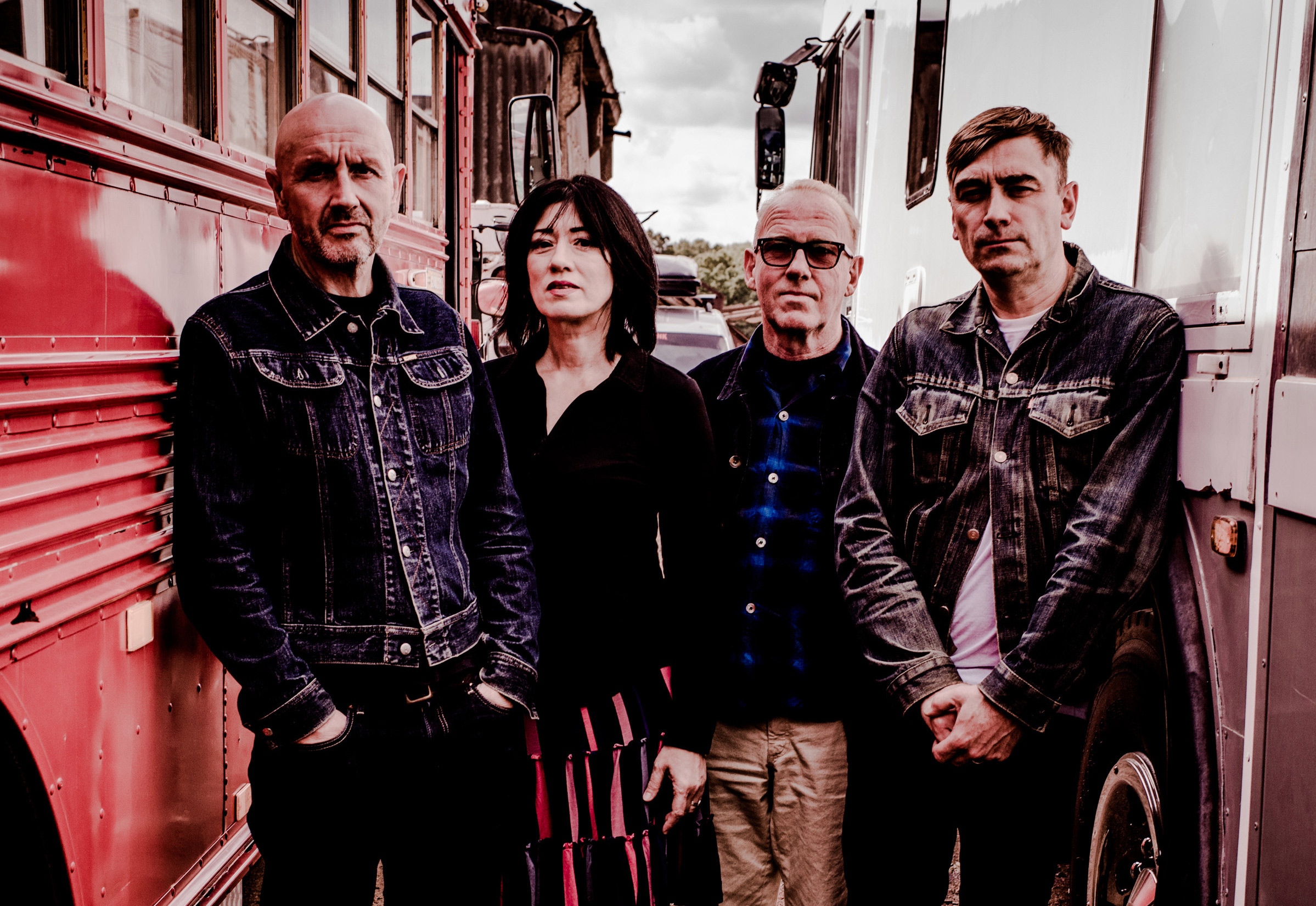 Five years ago the thought of LUSH reforming was nothing more than a pipe dream, speculated about on online “shoegaze forums” but without ever really thinking it would happen.  When it actually did happen after months of supposition and speculation there was a tour of the U.S. and the U.K.  a brand new EP and even talk of a new album.  But it seemed that some of the issues that forced Lush apart pre drummer Chris Acland’s tragic suicide had never really been resolved. You can read Miki Bereyni’s fascinating and candid essay on “the Peaks and Pitfalls of being a songwriter in a band” which goes into more detail HERE

But from the ashes of the Lush reunion came a reinvigorated Miki, who was perhaps initially the most reticent about the reunion, had actually seemed to be the one who really embraced and enjoyed performing again after such a long gap.   And from that reinvigoration came a brand new musical project “Piroshka” featuring Miki, Moose guitarist KJ “Moose” McKillop, Modern English bassist Mick Conroy and ex Elastica drummer Justin Welch, with the latter two both working with Miki during the Lush reunion.

Ahead of a show, we are putting on at Phase One in Liverpool with Piroshka headling tickets HERE, we had a chat to Miki about her return to music, writing collaboratively, sexism and touring again.

VP: Understandably it took a long time for you to step back into music, with the Lush reunion a few years back what finally made it happen?

MIKI: I figured it was a good personal challenge (I was never going to run a marathon/swim the Channel but playing the Roundhouse seemed like a pretty good landmark achievement) and I felt my kids might get a kick out of it.

VP: Emerging from Lush’s brief return you met Justin, and it seems he a big catalyst in motivating you to continue writing and performing music which eventually became ” Piroshka .”

MIKI: When the Lush reunion ended, Justin suggested we continue making music. I’d really enjoyed playing again, so it seemed like a good idea to continue while there was still some momentum.

VP: Have you and your partner KJ (Moose) ever written anything previously or is Piroshka the first time in all these years you’ve written together?

MIKI: No, which is why Justin’s offer felt like an opportunity that should be grasped? Left to our own devices, Moose and I would have never got it together – too easily distracted by the day-to-day of bringing up our kids.

VP :Are your kids even remotely interested or being teens do they find anything their parents do to be a huge source of embarrassment.

MIKI: Our kids have their own stuff going on, so whatever Moose and I are doing is a bit second tier – as it should be! I think all teenagers worry that their parents will embarrass them. They’ve come along to a few Piroshka gigs, though, and haven’t fled in disgust.

VP: It’s a strange time for music, I mean when Lush started out I’d imagine you didn’t see music as something you may be doing at this stage in your life. But many of your peers are still at it and music fans from the 90s still regularly go to gigs.  What have you found to be the biggest changes in what’s left of the ‘industry.

MIKI: Not making any money at all is a bit of a ball-ache. I’d love to play more gigs and tour, but at some point, you have to actually do a day job that pays the bills. I don’t really have much of an overview, though. At this stage, we just feel like a new band starting out. We’re enjoying the community and camaraderie – recording and rehearsing locally; involving friends in the record, gigs, artwork and videos; happy to be working with Simon Raymonde and the Bella Union folk etc.

VP:  And how does touring compare with Pirsohka in comparison to life on the road with Lush in the early days

MIKI: Well, I’m not wedged between a bass drum case and a guitar amp on a damp mattress in the back of a Dodge Commer van. And no one at the gigs has yet shouted “You’re shit!” or “Get your tits out”. So that’s a step up. On the other hand, I have to negotiate a daily panic over where I’ve left my reading glasses. And I can’t allow myself even a single drink before I go on stage or else I forget half the set.

VP: There are a number of tracks on the debut album ‘Brickbat’ what have a political bent whether it’s touching on the clusterfuck that is Brexit, or the spurious hysteria of the Daily Mail.  Would you say you’re still politically engaged or have you reached a point when you look at Trump, Johnson the inertia within the Labour Party and simply think ‘what’s the fucking point? ‘

MIKI: I wish I could feel detached enough to think ‘what’s the point’ but actually it makes me so angry and upset that the rage gets in the way of me doing anything constructive. It seems pathetic to think that writing a song or playing a gig will do any good at all in the face of some of the vile bollocks that is currently being enacted, but it gives me some mental solace to articulate some of how I feel and connect on some level with other people who think similarly.

VP: With Lush, you’d often discuss sexism in the industry and in society, have things improved at all? Or do you think there’s a dangerous backslide? A situation in which social media may have inadvertently inflamed, in the sense that entitled blokes hide behind their keyboards fire off hugely offensive messages. send dick pics and think there are absolutely no consequences? I mean female friends have shown me some of the direct messages they get on social media and they are absolutely appalling!

MIKI: I’m a bit tired of trying to gauge whether incrementally things are marginally any better or worse. My daughter and her friends had to put up with a slew of rape jokes, abuse and ‘girls are crap at everything’ bullshit throughout their schooling. Followed down the street, leered at in public, harassed on the tube… it’s just part and parcel of being a girl – was then, is now. And when you point out that this happens whatever the woman is wearing, whatever time of day it is, in any situation and in all kinds of circumstances – that the common thread here is males hurting females, blokes getting their jollies by bullying and humiliating women – you get a barrage of people dragging the conversation away from the central issue: ‘not all men’, ‘men get raped too’; and victim blaming: ‘feminism has gone too far and men feel threatened’, ‘some women make that stuff up’. There’s a very simple problem – lots of blokes treat women like shit and a ton of people think that’s ‘natural’. Until you tackle that, nothing’s going to change.

VP: Back onto the positives what have been the most enjoyable aspects of returning to music and performing live again?

MIKI: Often the start of a band is the most enjoyable bit. You have nothing to lose, so every step feels like progress, and Piroshka is still at the stage where we are finding out what we can do and anything seems possible. There were a lot of keyboard parts added to the songs during the recording, and I layered a ton of backing vocals, but we hadn’t really thought about how we would bring that to a live performance. It’s been brilliant to have Mew Welch and Sukie Smith take this on for the gigs –they are both remarkable and talented and absolutely hilarious, and bring joy to the entourage.

VP:  What future plans do you all have for Piroshka