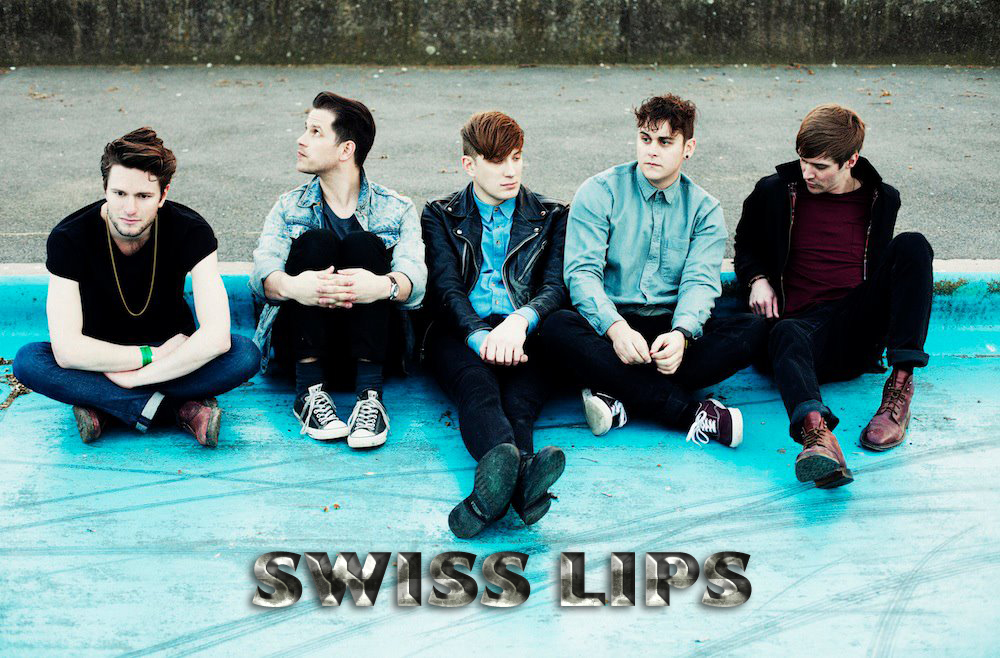 Swiss Lips describe themselves as “Pop sorcerers, going straight to hell” we’d rather not speculate as to  exactly what they may have been getting up to warrant eternal damnation, but we’d imagine it may well involve the ladies.  Swiss Lips are a five-piece band from Manchester who produce a pounding, relentless life affirming mix of pop, dance, electro and indie. They shamelessly go straight for the jugular creating a soaring pop blitzkrieg that we’ve previously described as having “more hooks than Abu Hamza at a pirate convention, and indeed more hooks than New Order’s former bassist at a family reunion in a hall of mirrors.”

There’s no pretension here, no agonising over transcendental phenomenology or the existential triangle , this is quite simply full on wide screen pop music loaded with optimism, designed to make your spirit soar and get your toes a-tappin’.  It is essentially escapist music to party hard to on a Friday night after a week spent being ground to dust on the unforgiving mill of global corporate capitalism.  It’s Passion Pit without the geeky arch wankery, a joyous amalgamation of styles replete with classic Indie guitar licks that may even tempt the rhythmically challenged to indulge in throwing a few ill advised shapes on the dance-floor after a beer or three.

With huge chart bothering tunes in waiting, such as  Danz and U Got The Power in their musical repository and a four album record deal with Sony duly signed within months of their demos emerging online, it would appear they are set to live the dream. We’ve caught them live twice in the past  month and were suitably impressed on both occasions by their energy, passion and musical acumen, and so we thought it was time for Swiss Lips to open up and acquiesce to some inquisitive probing.  Singer , Sam Hammond who once, half  tongue in cheek, described his raison d’etre was to write songs  “so I can move into a castle and be as weird as Phil Spector,” gives us the low down.

VP: Hello, Right we won’t be going on about the band name as its been well documented that it’s slang for a ladies tuppence( and let’s face it Teenage Fan Club are affectionately referred to as “The Fannies” ) But were there any reservations from band members or management about the choice ?

SAM: Luke still hates it, it’s always a tough one.  All band names sound terrible until they become great.

VP:  How long have you been together , because you kind of exploded onto the net about six months ago and hit the ground running, gaining praise, blog love and within a few months a big label 4 album record deal. Have you all had a chance to catch your breath ?

SAM: It has gone really fast, but we like it that way. We’ve all known each other for years ,  Luke and I were in a different band previous to this but Swiss Lips as we know it came about in November 2011.

VP:  We have a recession, everybody’s struggling, so what does it mean for you as a band to have label support. A degree of vindication in your talent ? Plus are we talking Premier Inns are opposed to Travel Lodges, what have been the biggest differences so far ?

SAM: We couldn’t do what we do without it. Travelodge’s are totally fine but they would be so much better if they just gave you a bit of shampoo.  In my old band we went all the way to Texas without anywhere to stay or any money, landing at 10 at night. That was interesting.


VP:  You’ve managed to produce a genre straddling fusion of  indie, dance, electro which is  something Manchester bands seem to be dab hands at, what sort of music’s influenced you ?

SAM: Personally, I’ve gone through some pretty different phases. At one point I would only listen to Hank Williams and Gram Parsons and wore a Stetson.  As a band we just wanna make party music, music that makes you feel awesome. When I was younger I used to think that if music didn’t have a guitar in it it wasn’t cool, haha.


VP: Your video for “Danz” is  ace where did the idea come from and who the devil is the guy in the video, he looks kind of familiar …….

SAM: He’s called Barrington De La Roche and he’s a smooth criminal, that’s all you need to know. The idea was thrown together pretty quickly, we owe the vibe to his performance though!

VP:  I caught your set at Liverpool Sound City and thought “wow, not only can these guys write soaring pop songs but they can play a bit too.”  Do you find that when people see you live you’re able to smash any preconceived notions that you are somehow “synthetic”

SAM: Thanks, we make pop music, so we’re always gonna be judged, it doesn’t bother us.  We’re all music nerds, of course we can play!

VP: We reckon you’d go down amazingly well at festivals, there’s a real energy to your set . Are you playing any big ones this year ?  What exciting gigs have you got lined up for the rest of 2012

SAM: We have a few good ones yes, Wakestock, Lovebox, few more. The big one for us though is Fuji Rock in Japan. Can’t wait.

VP: When’s the début album due to drop, has it been written and recorded yet ?  What’s the time scale? A couple of singles and then the album launch?

SAM: We’ve finished recording it yeah! Mixing at the moment. We’re gonna release a few singles and see where we’re at. Album sooon!

VP:What three songs do you wish you’d written and why?

SAM: “God Only Knows” by the Beach Boys , because it’s my favourite song, and I can’t work out how he did it.

“Wanna Be Starting Somethin’ by MJ because it still blows my mind.

“Please Please Please , Let Me Get What I Want” by The Smiths just because I’m jealous of how it makes me feel.

VP:  Fast forward a year, what do you hope to have achieved?

SAM: GIVE THEM WHAT THEY WANT!

1 thought on “INTERVIEW – Swiss Lips : They Got The Power”