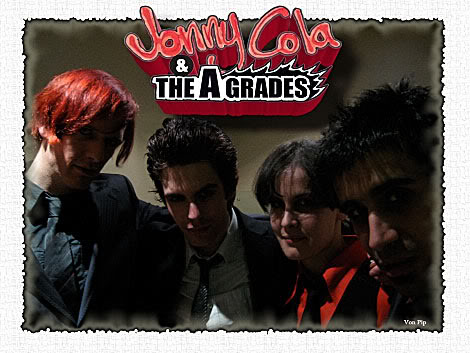 “Shooting Up” By Jonny Cola & The A-Grades

Jonny Cola & The A-Grades have been making waves in London since late summer 2008. They have performed live sessions for Resonance FM and Earwax Radio, played high profile club nights and SE5 dives, self-released one single with lo-fi accompanying video, made jaws drop and grown men weep. Crucially, they have remembered to write some tunes.

“Disappearing Act” is their second single, a tasty three-and-a-half minute slice of dirty disco pop, complete with killer chorus, key change and calypso middle eight. You can’t say fairer than that. Expect it to be making people fall over on sticky dancefloors all summer long.

The single is available in two different download packages. The first, available via iTunes and the usual digital stores, features “Disappearing Act” itself accompanied by remixes from Hunterheck – aka Hamish from Scottish electronic maestros Swimmer One – and The Soft Close-Ups. The former essentially transforms the song into an ultra-summery, borderline Balearic stomper. Meanwhile, The Soft Close-Ups take our heroes on a thrilling eight-bit dub adventure. We predict an eight-bit dub explosion in six months’ time.

Meanwhile, the second set of downloads – a CD2 for the postmodern age, if you like – is available to download for free here. Rather than “Disappearing Act”, what you get is the song which was originally intended to be its double A-side, “Shooting Up” – a skewed Motown-tinged pop classic, co-written with David of The Soft Close-Ups (and formerly the singer in Luxembourg) – and yet another remix of “Disappearing Act”, a spiky electro reimagining by Shoreditch’s Hellbent & Leather.

Both “Disappearing Act” and “Shooting Up” are taken from The Yellow Mini, a short album released next week (June 1st) via the obscure BBA Highland label, with distribution from the less obscure Cargo Records (which means you can actually buy it in shops and stuff). The format should not be seen as indicating a lack of ambition – quite the opposite. It’s just that sometimes you can get things across more clearly in 23 minutes.

Jonny Cola & The A-Grades are determined to make a drama out of a crisis.

Here’s what Jonny Cola (vocals), Mauro Venegas (guitars), Aurora Sommer (bass) and Nicholas Bukowski (drums) had to say when confronted with a searching set of questions…

VP: Tell us how the band came into being, how you all got together…

JC: We met in a dense and frustrated crowd at Victoria Station, metaphorically speaking. Rather than queue up for a ticket from the sole working machine on the vague assumption that a train might actually be departing anytime soon, we saw our chance and hot-footed it crosstown to craft songs to live, love and die to. One day, we aim to return and commandeer the tannoy system. That’s our story anyway, and we’re sticking to it.

VP:  What’s in a name? Where did Jonny Cola come from?

JC: I used to record electropop, before it came back into fashion, under the moniker of Charly Bubbles. Jonny Cola is his older, slightly more jaded brother. The A-Grades are essentially my dream team, my fantasy band made flesh. Which is nice.

VP: How difficult is it for a band to get their music “out there” these days?

JC: It’s incredibly easy, but getting anyone to listen, or to take you seriously, is another matter. If you’re not desperately postmodern, providing a quick fix of disposable novelty, it’s hard to register in people’s minds in the gaps between Facebook messages and videos of amusing cats.

NB: Yeah, it’s not specifically difficult at all anymore. It’s all measured on your expectations of what you think should happen with it. You can create it, fund it, then make it appear somewhere for people to buy, but ultimately it can disappear just as quickly without radio play or major label funding. Even if it’s great. People’s attention spans can also be quite brief unless the idea that something is brilliant is consistently cemented into their minds with some insistent marketing scheme. I do like the amusing cats though.

VP: Songwriting… How do you choose subject matter etc?

JC: I’m not sure that writing songs on a particular subject works very well – for me, anyway. I find it more fun to start with visual and emotional snapshots, and see where things go from there. Think of it as a psychoanalytic process, if you like, or just an evasive tactic to avoid revealing too much.

JC: We’ll be recording a full-length album, for which The Yellow Mini is a mere appetiser. I also plan to teach myself to hit top C.

NB: See answer below. Once we’ve mastered this, we can find out and let you know.

VP:  And, in an ideal world, apart from your own world domination, what else would you like this year to bring?

JC: A ceasefire in the wholesale demolition of London’s West End.

AS: Time travel. Not for all though, just me. And possibly you, you and you.

NB: Lifesize models of ourselves that can play musical instruments. Like Kraftwerk. I’ve decided it could be just as much fun to watch our own gigs as it is to play them.

VP:  Who are your major musical influences?

AS: Too many to mention but as far as bass players are concerned, James Jamerson and Carlos D.

VP: What’s been your weirdest experience as part of a band thus far?

JC: Our first gig – from terror to elation in 25 minutes.

AS: I am hoping it is yet to come.

VP: Who would you most like to execute for crimes against music?

JC: I can think of a few much-hyped acts of recent times who could definitely do with repaying their debt to society. I’m far too polite to say who though.

AS: I’m against the death penalty and wouldn’t wish death on anyone, not even Rod Stewart (although I have to say I am scarred for life now and am not sure I could touch a man ever again after seeing this video –

NB: I’m much less polite. The Ting Tings, The Hoosiers, Scouting For Girls and The View are all shocking. That Rod Stewart video eases the pain though.

VP:  Tell us something nobody knows about yourself…

0 thoughts on “Here’s…Jonny!! Jonny Cola And The A Grades Interview”