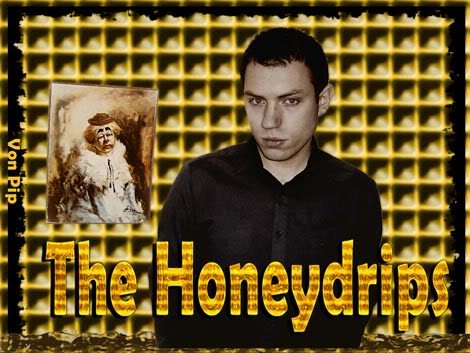 “(Lack Of )Love Will Tear Us Apart “By The Honeydrips

Meanwhile back in Sweden ….a chap called Mikael has certainly pulled the wool over my ears. When I first heard (“Lack Of Love) Will Tear Us Apart” I quite rightly expected that such an expansive, dreamy sound would of course have been produced by a band of at least the same size as, say, the Polyphonic Spree, but I was in for rude awakening . “Lack Of Love “(featuring dreamy vocals from Cat 5‘s Hannah ) is the lead track from The Honeydrips excellent album “Here Comes the Future”. It’s a wistful, thoughtful album that seems to weave it’s way through various genres, 80’s bleep pop, Indie, electro folk, jangle pop, twee, its all there (except maybe Death Metal, but you never know maybe next year eh ? ) . The vocals conjure up the ghosts of Lloyd Cole and Edwyn Collins and possibly a less grumpy or gruff Jim Reid . I met up with The Honeydrips and was aghast to find only one member of the band had bothered to turn up …………….

VP: Just who are the Honeydrips

MC: The Honeydrips is a one man band consisting of me: Mikael Carlsson, Gothenburg, Sweden. (Phew!)

VP: How would you describe your music ?

MC : The idea behind The Honeydrips is for me to explore whatever kind of music I want. So far the music has varied from The Jesus & Mary Chain styled fuzzpop to chansons in Swedish, via techno pop, 80:s-sounding twee and more. The keyword though, spells P-O-P.

VP: Who would you cite as your main musical influences /heroes

MC : Given the answer above, the influences vary a great deal. But I do have a few influences that are more important than others, like Felt and Saint Etienne. They’ve influenced both my music and the attitude behind it, allowing themselves to develop in whatever direction they wish.

VP: Imagine a world without mobile phones or the Internet . Could you cope ?

MC : Well, since I’m 27 years old, I’ve lived more than half my life without these things. So yes, I could cope. Some might even say we were happier without it that with it. I suppose I disagree.

VP: What would you say are the best and also the worst aspects of being a musician in 2007 ?

MC : Ummm… The best part might be that it’s easy to reach out to people, with the Internet and all. And it’s easier to make music on your own nowadays. Before you had to recruit a band and rehearse the songs with them, hire an expensive studio just to be able to record a crappy demo tape. Now you can do it all on your own in your tiny flat. The worst part is timeless: it completely messes up your mind.

VP : You played T!T!T! in July (07) and I believe you used your mobile phone as your sole source of instrumentation ??True or False ? How did the audience react to that!

MC : That’s true. I usually do that, it’s practical. The audience were kind enough not to call or text me during the show. I take it as a token of their appreciation.

VP : You released the rather impressive Album “Here Comes The Future” in March 2007 . Which are your favourite tracks from it ?

MC : My favourite song is the last one, “In some distant future”. For personal reasons. But if i didn’t love all of the songs, I would never had released the album. Too many albums with just a few good tracks have been released in the history of pop music. I waited a long time to do this album, so that it would be perfect all the way, plus work as an album. And that’s another thing, many albums are merely a collection of songs. I wanted my album to work as a whole. This is my gift to future generations for Christ’s sake!

VP : And to finish on a lighthearted, upbeat note , when your time is up, and you sense the reapers icy fingers on your shoulders, as you are about to shuffle off this mortal coil, what would your last five words be ?

MC : Stay away from music making.

“I Wouldn’t Know What To Do ” by The Honeydrips