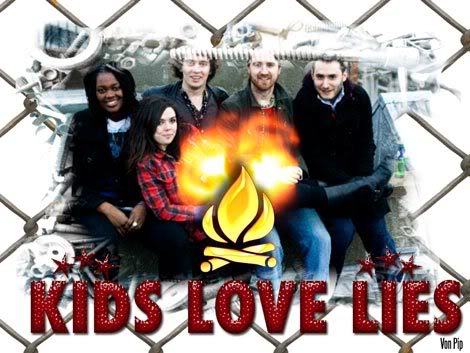 “Count In My Head” By Kids Love Lies

Kids Love Lies were recently described by the NME as “Tweecore/power pop/pop-punk” -Pardon ? Apart from over use of the word “pop” what does that even mean? “Tweecore“, I assume is the polar opposite of hardcore, indeed the definition of “twee” means “Overly precious or nice” so lets throw that one out of the window straight away eh? Now then, onto power pop, pop punk ? A description that seems to be given to anything that is melodious but has a rather spiky attitude, yes ? Is it both punk and pop? However punk was surely the antithesis of  “pop music” as we knew it  and correct me if I’m wrong, but I can’t recall the Pistols singing “Anarch-twee In The UK”, although admittedly,  John Lydon has since  developed a disturbing penchant for all things twee-d.  Yes musical genres are still as baffling as they are meaningless, but, one imagines, great fun to make invent, after a hearty liquid lunch in IPC Towers.

In essence, I imagine the previous description is an attempt to succinctly convey the fact that Kids Love Lies cleverly combine all the elements mentioned above to produce a sound that has a punk attitude with a pop edge, or is that a punk edge with a pop attitude? I feel dizzy! Anyway Kids Love Lies debut single ” Count In My  Head” is certainly a  spiky, jagged slice of pop  that has both  melody and riot grrrl attitude in abundance, and contains a  youthful exuberance and energy that can’t fail to win you over, unless you’re a bit of a  twa*!   Hmm, on reflection maybe I should have saved time and simply said, it’s  a f*cking great pop song  so let’s forget pretentious pigeonholing and let’s enjoy the music….and while we’re at it  lets talk to the band.

VP:  Predictably I’ll have to start with a question relating to how you met, and how the band came together?….. and I just have ;)


Matt: Seems like half of London tried out to be our singer until Ellen turned up (drunk) and blew us away. That was a pretty good tube ride home that night after practice, thinking we’d finally sorted out the singer problem. I think we had a few cans on the way to celebrate. That was before Boris ruined that sort of thing.

VP:  The name “Kids Love Lies?” What does it mean?

Leigh: It’s an anagram of ‘kilos de Elvis’, I saw it on a poster for a club night in Amsterdam, I was told it roughly translates to ‘ a Kilogram of Elvis?’

Ellen: Ha-ha, it’s just a kinda saying that a friend of mine used to say…although I do like Leigh’s anagram

Ellen : Well we’re playing loads of great festivals this year like The Great Escape, Sellindge etc We just want to carry on playing to as many people, where, when and however possible. Getting a good support slot on a tour would be SWEET! But mainly we just really wanna enjoy ourselves, and just keep on writing more and more songs that just get stronger and stronger until we have the right material for an album.

VP:  Your music’s been described as post punk angst with riot grrrl attitude, but how would you describe it?

VP: What’s on repeat on your I-pods at the moment?

VP:  Ellen, who do you think are the most inspiring female singers in pop history?

Ellen: Oooh that’s a hard one…there’s been so many great female singers in the last few decades…But most inspirational to me would have to be people like Janis Joplin, Siouxsie Sioux, Poly Styrene,  Debbie Harry, Ari Up,  Dusty Springfield.. There’s probably so many more that I haven’t mentioned…but  I think basically any woman that just gets out on stage and has an attitude to be reckoned with is an inspiration…..it’s not just about having an amazing voice, but about how you carry yourself on stage…and all of these women have something about them, a stage presence that draws you to them; totally captivating to watch….More recently  female singers like Karen O and Peaches give me no end of inspiration, especially with their illustrious stage outfits!

VP: What do you think of the current trend for so called “legendary bands” reforming? For example is Spandau Ballet a reformation too far ?  Do you think sometimes “Move over granddad you’ve had your go, give the kids or chance?” Or is it great to get the chance to see bands like My Bloody Valentine et all?

Raf: It’s a bit sad in a way, but its a good way for them to make a living. I’ve seen a few bands do reform type shows and they’re fun but it’s not the same as discovering a good new band.

Leigh – If the fans still want it I see no harm what so ever, I got to see Gang of Four and My Bloody Valentine last year, 2 bands I’d thought I’d missed my chance of seeing live.

Matt: Saw the Pixies and My Bloody Valentine which was ace, didn’t think I’d ever get to see them and they blew me away (MBV actually left me deaf for about a week).. Got all excited last week when the Stone Roses teased us with a possible reunion which isn’t happening apparently. Nope, I think it’s a good thing as long as you had the credibility in the first place!

VP:  Kids may indeed love lies, but what’s the worst one you’ve ever told ?

VP:  Is The X Factor’s popularity definitive proof that there is no God?

Matt:  X factor is just representative of this ‘get famous in 5 minutes’ culture that society seems to have appropriated! Whatever happened to getting success through a bit of grit and hard work rather than having it handed to you….

These shows have the tendency of producing a short lived winner….think of the amount of series they’ve have with only maybe 2 people ever continuing their success after the show!

VP: What are the five most annoying songs ever written are ….?

Raf: Anything by the Enemy.

Ellen: Hmmm the thing is if a song starts off annoying I usually end up liking it after a few listens!! but I HATE ‘laddy indie music’ like just imagine a group of fat beer swilling chavvy lads goin ‘yesss mate Kaiser chiefs, the Enemy, LADS have it!!’ Very annoying!

“Count In My Head” By Kids Love Lies