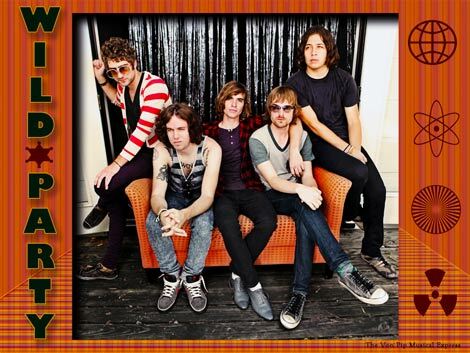 Give me a bottle of vodka, a guitar and a lap top and it will almost certainly end up in tears. In all probability I’d drink the vodka, trip over the guitar and then throw up all over the laptop before collapsing in an undignified heap of mewling self pity.  Some things just don’t mix well. However remove me from the above scenario, keep the guitars the lap top, the vodka and add five lads from Texas and what do you get? A Wild Party perhaps?

Wild Party started out with friends Lincoln Kreifels (vocals) and Lucas Hughes (guitar) producing bedroom demos on their laptops. Taking their cue from a myriad of musical sources it soon became apparent that they had something special going on and so they recruited Lincoln’s brother Jake (bass,) Ethan Kaufmann (guitar) and Jared Shotwell (drums) to take things to the next level.

Their music is an eclectic mix of pop melodies with driving guitars layered over dance beats and loops. Some have even compared Lincoln’s voice to Brandon Flowers; personally I’m not a huge fan of Mr Flowers, a man who seems to have all the personality and allure of wet tarmac on a Sunday afternoon and have therefore refused to allow my ears to acknowledge the comparison. However if you’re looking for a lyrical, slightly surreal description of the band you may well enjoy Lincoln’s own philosophical Eric Cantona style take on Wild Party.

“So, like this giant evergreen right? Like it falls perfectly across a rapid river… deep in the tropical forest of Mozambique, and even though there’s like no one there to hear the sound, an inexplicable energy is released that animals react to instinctively and begin making their voyage on this celestial, unspoken of path to the mainland and righteous parties.”

I’ll have two pints of whatever Lincoln’s drinking  please.


The band is about to release a double A-side single ‘Take My Advice / Life’s Too Short’ on 15 November  through Friend Vs Records, on 7” and we managed to prise guitarist Lucas away from his Wild Partying for a quick chat.

VP: Right then, how did you guys get together to form a band?

LUCAS: Well Lincoln and I have been friends since seventh grade so we had grown up together and played music just for fun. Then as senior year is about to end we had decided to make a serious song and we then knew that there was something more to what we had. This session actually turned out to be the first song we recorded as ‘Wild Party.’ Once we had recorded our demos we rounded up our band to get the live set going. They are great musicians who understand what exactly Wild Party is and going to be.

VP: Brothers in bands, is it a good idea? I’m thinking more along the lines of the Gallaghers and the Reids  more so than the Jonas Brothers.

LUCAS: Well I’d have to ask the brothers their opinion about that but so far it’s worked out without any major problems.

VP: Ah so you’ve not seem them attack each other in an alcohol fuelled spat? Oh well, it’s early days. . ..moving swiftly along, your sound appears to contain a healthy mix of sixties, seventies and eighties influences, which artist’s from these eras do you most admire?

LUCAS: For me, I would say that I like blaring anything groovy. I enjoy fusing different elements from various decades into our songs. But I guess I do love the sixties and the eighties.

VP: Ok, what sort of things inspires you to write songs? And what can we expect from a Wild Party album ?


LUCAS:  Well things are neither black nor white. I guess we write songs that are both introspective and extrospective. It’s definitely an interesting process. As for an album you can expect no fillers.

VP: Has 2010 been a good year for music, or generally one to forget? What bands/albums stand out for you?

LUCAS:  Generally one to forget. I like a few bands here and there but I feel as if there have only been a few songs that stand out rather than a whole album. I guess that’s sort of how things work nowadays. Bands will get on a commercial or show and get known solely off of one song. I don’t want to just have one song.

VP: I guess it’s important for musicians to be net savvy these days, use social networking to connect with fans and get the word out …some musicians tweet so much you do wonder when they find the time to write music.

LUCAS: Defiantly very important to be technologically savvy. Without it… well, you’re in the past.  And don’t worry there’s always time to write music.

VP: Five words to sum up Wild Party would be….