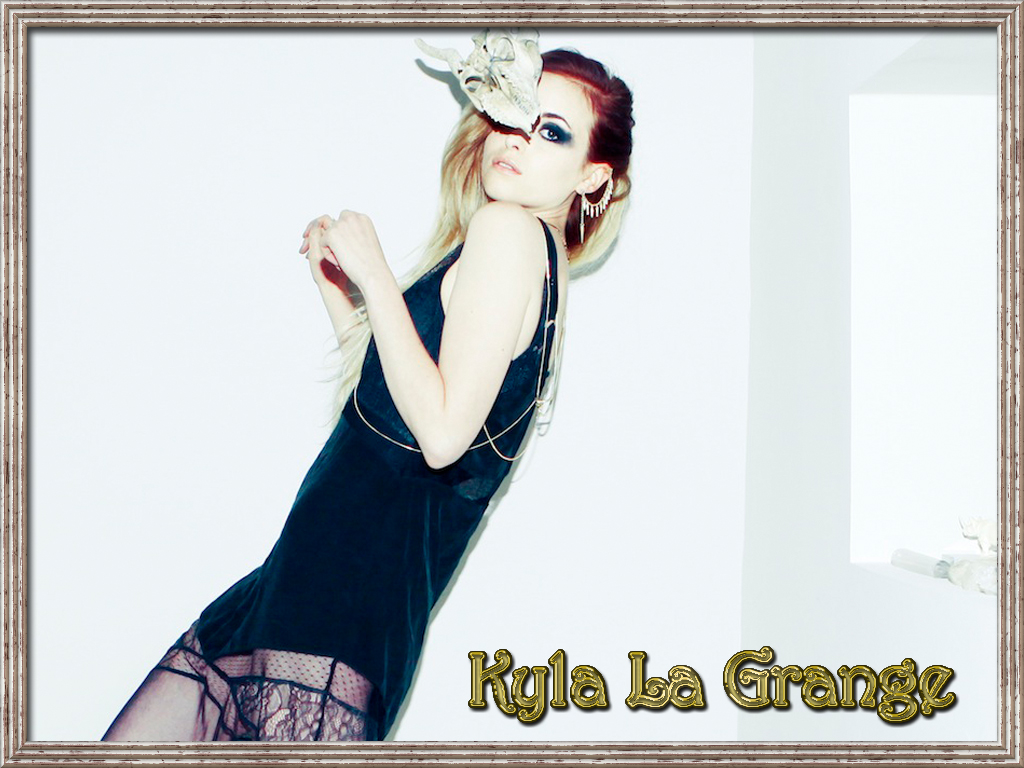 We first highlighted Kyla La Grange’s epic brooding folk-grunge back in 2010, when we came across two early songs “Lamb” and “Vampire Smile.” Both seemed to be rich with promise and indicative of an outstanding new talent.  Since then Kyla has gigged tirelessly, she’s built up a loyal fan base and also a reputation for not only being one of the most enthralling new performers about, but also one of the nicest. She’s  honed her stage and song craft, whilst continuing to write  with on eye on her prospective début album.   “Ashes” is the result of that combination of hard work, talent and possibly no small amount of heartbreak, it’s  a compelling 11 track collection that combines huge swooping lovelorn epics juxtaposed with reflective, intimate folk infused numbers. At times the wall of sound and tribal drumming conjures up  the spectre of early Fleetwood Mac, a nod to the theatrical flair of Kate Bush with a touch of Big Country guitar squall thrown in. Vocally it’s that husky, honey cracked alluring Marianne Faithfull meets Stevie Nicks at confession kind of vibe, all tied together by Kyla’s bleakly dramatic mini-sestinas.

Yup, lyrically Kyla’s never going to be worrying Katrina and The Waves in the definitive  perennial upbeat summer song stakes and you ponder, with all the heartache abounding, how the poor lass has survived. “Ashes” certainly is a torrid  emotional roller-coaster, but there is a redemptive edge imbued with a steely feisty “I will survive” sense of resolve that shines through and ensures it’s not completely devoid of hope. As well as the outstanding singles such as “Been Better,” ” Vampire Smile”, “Walk Through Walls” and a wonderful reworking of “Heavy Stone” there’s plenty of drama to be had within “Ashes” which pretty much rubber stamps what we thought back in 2010, that, [with apologies to Goethe,] “Talent develops in quiet places,” -not in the harsh spiteful death ray laser eyed glare of reality TV.

We caught up with Kyla just prior to supporting Metric in Manchester.

VP:  Your album “Ashes” is due out very soon, what can people expect from it, in terms of themes, melodies , influences etc ?

KYLA: I think it’s kind of got two sides, on one hand it’s got epic wall of sound guitars and then there’s the stripped back, folky kind of sound . I wanted to capture both sides of my song writing really and the live show, which kind of undulates with pin drop moments alongside big dramatic guitar tunes. Oh and all the songs are pretty miserable too [laughs]

VP: Well yeah, your songs are a bit dark, possibly made lighter by the strength of the melodies, what do you think it is about the darker side of the human condition that always seems to inspire artists ?

KYLA:  I don’t know really, for me the only reason I started writing was when I felt bad, it was just something I felt compelled to do.  I mean I never actually sat down and thought, I wanted to write this sort of a song or that sort of a song, it was just a way of getting my feelings out. Even now when I feel bad I always feel the need to write, to work through those feelings. No idea why , it just works like that!

VP:   Obviously the songs are all personal but is there a particular song that stands out, whether it be for reasons such as it  was the first song you’d written, where you thought “I’ve nailed it” or because they remind you of a particular time ?

KYLA:  Yeah the first time I maybe thought I might be able to write songs that weren’t terrible [laughs] was when I was 19 and wrote “Vampire Smile.” I mean I’d written songs before that but that one just felt different. And then at gigs people started to come up and say they really liked that song, whereas before it might just be “nice set” without them picking anything in particular out. It was nice that it meant something to other people other than me, so yeah, that one does stand out !

VP:  Your parents have been described as “arty bohemian types” and your Dad actually teaches photography and took all the photos for your singles. Have they  been a huge influence and what do they make of your career ?

KYLA:  Well he didn’t take the photos specifically for the singles as such, the photos were already taken, in the 70’s and 80’s and I asked if I could use them! But yes, they are almost too enthusiastic [laughs] they come to every gig. They both wanted to do different things with their lives but when they moved to the UK they had babies so had to get jobs really. But they always wanted myself and my brother to do what really made us happy.

VP:  I’ve only managed to catch you live once so far, at Manchester D2D festival ,which was quite hectic.  What do you enjoy most about playing live ?

KYLA: Yeah, it’s always quite a rush at these festivals , no much time to sound check etc, but we enjoyed Dot To Dot even though the weather was shit yet again!  As for playing live it’s taken me a long time to enjoy it, I’ve never really felt comfortable as a performer, and I always used to apologise after each song. I think the best times are when you really lose yourself in the song, you forget about the audience and I know it’s sounds a horrible cliché, but you are really “in the moment.” I wish I could have those moments all the time! Those are my favourite times. But for me it will probably always be a battle, because when I get on stage there’s always a little voice saying “On no, everybody hates you” and I have to silence that voice.  I still get nerves, but after so many gigs I’m conquering them, in the past you could hear it in my voice and my hands would shake!

VP: How do you write, do you put aside time or is it a constant process – do you wake up in the middle of the night and think! THIS is an idea!

KYLA: I only put time aside when the songs almost written, but the process of creating new songs is not really something I chose, I wish I could, it just happens and then I might sit there for hours working on it! When I write I get really involved in it, and the song kind of forms itself. A bit like speaking in tongues and then it all kind of works out, I kind of know what I want but just chip away at it. If it doesn’t come in the first couple of hours I find it probably won’t work!

VP: Any strange encounters with fans, I read you were flashed at, at one gig !

KYLA: Yeah that was at the Notting Hill Arts Club, at first I thought this girl was just really enthusiastic, because she was just dancing wildly at the front and I was thinking “yeah I like this girl, she’s great” but then slowly her top started coming down and she began writhing all over the monitors , which was erm, interesting, and then security came and took her away. I think she may have been a bit out of it to be honest! [laughs]

VP: Generally do you find it a positive experience meeting fans at gigs ?

KYLA: Definitely, I really enjoy it, I usually go out and do the merch stand. I love it, maybe because I’m such a self doubting performer, it’s great to get that instant feedback, being told what people enjoyed, what a certain song meant to them. I always come off stage riddled with anxiety, thinking oh that song didn’t sound good, this song could have sounded better , oh I did this wrong etc , so I get a lot out of it.

VP:  The Video for “Walk Through Walls” – I’ve just been watching it , who came up with that idea, it looks like it might have been influenced by your families South African background?

KYLA:  On all my videos I work with my friend Debbie Scanlon who I went to university with. We just throw ideas around and we work  through the kind of vibe I’m after. Our friend Liz edits the videos so we’ve all worked together for a while.  On the”Walk Through Walls” video we had loads of weird objects, skulls, bones, the house I grew up in had lots of strange artefacts. We also try and replicate this world on stage too, or at least the idea in my head , the fantasy version of how I’d like to live. But yes the video was fun but I did get lots of bruises as it was energetic

VP:  What have been you highlights so far ?

KYLA: The most recent highlight was our gig at Village Underground, it was our biggest show to date, I don’t know if you’ve been but it’s an incredible venue, there’s a huge high ceiling with a skylight and stone walls. It’s kind of like a warehouse crossed with a church and we decorated the whole stage with trees, there was an amazing lighting guy called Jamie, who had all these incredible lighting set ups.  I’m always pessimistic about gigs and how many people will turn up, it seemed a big venue for us and I’d convinced myself that nobody would come and that it would be terrible , but then when I came out on stage it was completely packed and it all looked so beautiful and it felt like a really magical gig!

VP: Finally what’s the plan for the rest of the year ?

KYLA: Yeah we’re supporting Metric, then there are a few festivals and then we have Switzerland and Germany  and then some more English festivals!

KYLA: Yeah I’m quite glad Glastonbury isn’t on this year as it would have been horrible with the weather. But I love Glastonbury, I’ll pretty much go every year until I die, I’m a real festival head. I love camping and getting my wellies on !