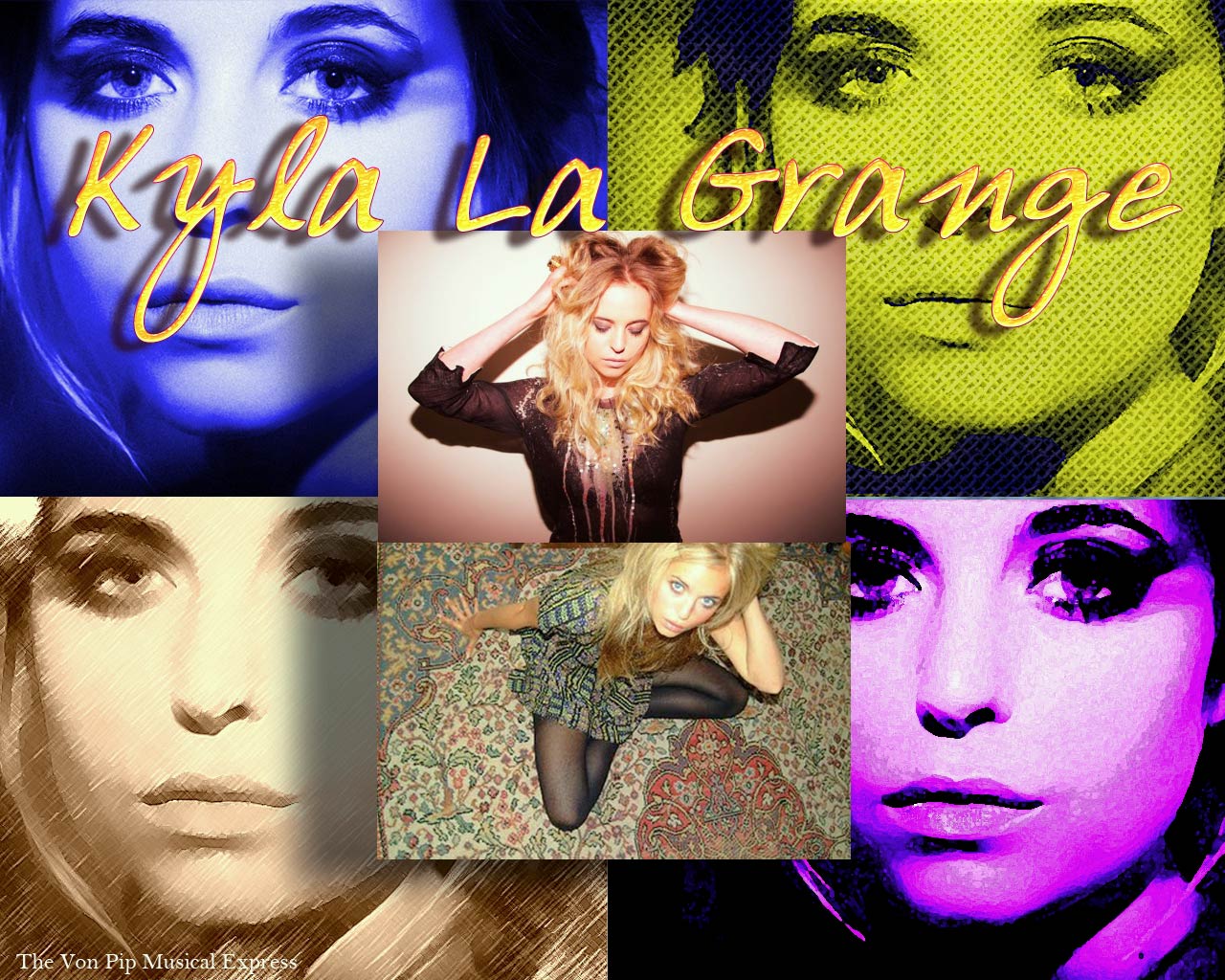 Let’s get a bit philosophical- “Most people live and die with their music still unplayed. They never dare to try.” Now,  anybody who’s chanced across  the “X Factor” may feel that this may be no bad thing, each person may indeed have a song to sing but whether that song is worthy of public attention is a moot point. The same cannot be said for Kyla Le Grange, a young lady who sings with the sort of smoky world weariness that recalls a younger (albeit more sonorous) version of Marianne Faithful. As a philosophy graduate from Cambridge University her songs were unlikely to be  simplistic nursery rhymes about boys being mean, make-up, Top Shop and dancing, nope our Kyla sings about  the things that matter, life, death, the beauty of disappointment, the ache of never satisfied love, the desolation of the heart and vampires, obviously.  “Vampire Smile” was written way before the “Twilight” series imbued the genre with the sort of empty poster boy hipness that contrived to make “The Lost Boys” look like a flick of some import. Unlike the aforementioned movies, Kyla’s songs are certainly not a case of style over substance and  any artist who writes  lines such as “Baby you need to leave/ Cos I’m getting drunk on your noble deeds/It doesn’t matter that they don’t get done/ When I feel this cold they’re like the fucking sun” is surely worthy of your attention.

Kyla’s Dad is Zimbabwean whilst her mother is South African, but she grew up in the slightly less exotic environs of Watford.  Always  a keen musician she started her first band at thirteen but  it was whilst studying philosophy at Cambridge University that she realised writing and performing music was something she really wanted to be involved in on a full time basis.

She started producing home demos  and as luck would have it  they caught the discerning ear of Rollo from Faithless.  Suitably impressed he made contact and introduced her to producer Marky Bates.  All three of them have since been sharing production duties on Kyla’s début album ‘Ghosts’, which is nearing completion.  We  took the opportunity to put some questions to Kyla because, a/ she’s great and  b/ that’s what we do!

VP: When did you first start writing songs, and what was the first song wrote where you thought, yeah I could actually really go for this..?.

KYLA:  I think I wrote my first proper song when I was about 14, though there had been many little mishaps before then. When I say ‘proper’, I don’t mean good, I think it was called ‘Poison’ and about a boy who had annoyed me and involved a murder. Really went in for the melodrama. I thought I’d try and go in for it all properly when I started gigging with friends at university.

VP: Did the fact that your parents both come from different parts of the world mean that you were exposed to a lot of different influences both musically and culturally?

KYLA: Definitely – both culturally and musically. I spent months of my childhood on big road trips across Southern Africa and Zimbabwe – my parents liked to do these massive trips and we bed-hopped, staying with relatives and friends. We’d stop the car and climb on baobab trees, go canoeing, live on beans and chips (they don’t really do vegetarians over there) and see so much every day. It was eye-opening, for many reasons. Musically, my parents’ tastes are hugely diverse. Classical, blues, rock, folk, Mongolian throat singing, it was all there.

VP: How did Rollo Armstrong happen to come across your work?

KYLA: A mutual acquaintance – he knew Rollo and thought he might like my music, so sent him a couple of really rough demos. He did like it, which was nice

VP: You have a free download on your website “Vampire Smile”-can you tell us a little bit about that song?

KYLA:  I wrote it when I was 19 and I thought I was desperately in love with a person it would have been inappropriate and wrong for me to pursue. Luckily my head got the better of me and I realised it was a misdirected obsession, but at the time I felt like I was going to burn up with the hopelessness of it all. It was your classic teenage crush really – explode and fizzle.

KYLA:  Not yet. I have written all the tracks I think I want to be on it (though you can never know for sure) but I think it’d be jumping the gun to decide a release date. I have a rough idea of the track list and first single.

VP: Would you call yourself a prolific songwriter, what’s the process?

KYLA:  I really go through phases – I can never sit down and say, ‘right, i’m going to write a song’. Nearly all my songs are written in sort of a spontaneous surge – and often at really inconvenient times, like, I’ll be riding my bike down a main road or it’ll be 2am and I want to go to sleep and then whooosh, suddenly I have this lyric or melody and I just can’t not write it. Sometimes I’m prolific, but sometimes I can go months without being able to write.

VP: You went to Cambridge and studied Philosophy; do you think having a detailed knowledge of this subject has had a big effect on your song writing? Does it make you more analytical perhaps?

KYLA: I don’t know if it does… I’m sure studying philosophy made me think in a more analytic way, and maybe that comes across in my songs, but often the songs reflect me at my most irrational and self-absorbed. I’ve no idea!

VP: Here’s a philosophical question for you-“Can something come from nothing?

KYLA: Haven’t you ever had sea monkeys? (http://en.wikipedia.org/wiki/Sea-Monkeys if you haven’t)

VP: The last few years have seen an explosion in female songwriters/ pop stars- who out of the current batch of singers have grabbed your attention?

KYLA:  Florence definitely – when I saw her play at Glastonbury I thought it was the best performance I’d ever seen. Laura Marling too – incredible voice and lyricist, and Bat for Lashes I love very much. Those three for me stand head and shoulders above the rest.

KYLA: To work very hard, gig very much, write as often as I can, and finish recording the album. Also to master the art of face-painting.

VP: Five words to sum up your mood today?