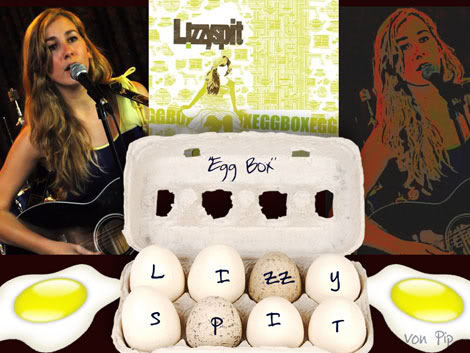 “Oi Cowell” have a listen to this, but beware it might confuse you; it contains something that you’re not really that well acquainted with, yes that’s right, REAL talent. Sorry Simon, but there’s nobody murdering “Hallelujah” here, or warbling the “I Will Always Love You” type standards that provide the oxygen of life for your lamentable variety show “The Crap Factor” . This is an alien concept to Simon, a man who lives in a creativity vacuum, but here we have a young lady who plays guitar and writes her own songs. Somebody who possesses an exquisite, soulful voice, full of charming innocence, uncontrived quirkiness and youthful yearning. But don’t mistake innocence for naivety, Lizzyspit is nobodies fool, she dedicates her album “Egg box” “To the boys and girls who have hurt me and the boys and girls I’ve hurt”

It’s an album full of wit, melody, longing and eloquence. To describe something as “lovely” could make it sound a little twee, but Lizzy’s voice is lovely without ever being twee. It’s just Lizzy and her guitar, nothing else is required, as she sings “I don’t need a drummer to make a beat/if it’s in your heart then it’s in your feet”. And do you know what? She’s right, she doesn’t, her sweet-sounding voice carries everything, and no amount of auto-tuning Cheryl Cole’s squeaky bleat could achieve such natural melody, and produce such an intimate and rewarding listen. I must confess I love this album, it’s a real gem and Lizzyspit should be getting mentioned in the same breathe as your Mercury nominated Laura Marlings, because she has got something that Cowell and his hellish legion of the bland could never manufacture, “raw talent.”

VP: Ello Lizzy, when did you first start writing lyrics and playing the guitar?

LIZZY: Hello!! Let me see, I wrote my first song when I was 16. Up until then, I’d been having classical singing lessons, but after a good few years, felt I wanted to sing the way I wanted to sing. So, I taught myself the guitar because I wanted to be cool, and wrote some very dismal songs about boys who didn’t love me. They were awful, and there was a different one everyday. A song and a boy! Seriously though, they just lacked maturity and experience.

LIZZY: Very much so. When I’ve been hurt, or want something I can’t necessarily have, I have hundreds of words/lyrics that come spilling out. I take everything that happens to me to heart, and if I couldn’t get them out in music, I’m not sure what I’d do. I think I’d be deeply unhappy. Then again, I find it quite difficult to put happy songs together, because I worry they sound really cheesy!! It’s something i’ve been working on though, and hopefully my new material (coming soon!) will show that!

VP: Do you think people can relate to and recognise themselves in your songs?

LIZZY: I’d like to think so, a lot of people have said ‘that song is so me‘ or ‘omg, I know exactly how you feel‘ so that always makes me feel happy that I’ve managed to cause a reaction. Up until October 2007, my songs, in my personal opinion, were the type of songs that only girls could relate too. But then I went to New Zealand for a month and something inside me clicked, I came home and suddenly my songs were different. It was really REALLY weird, but something I am thankful for!! I sound weird don’t I? Anyway, now I think that anyone who experienced the things I did, will be able to find something in the music.

VP: How long did it take you to record the album “Egg box” What unusual recording process’s did you use?

LIZZY: In total, it took me about 3 months, I became a hermit and hardly saw my friends because I spent every spare hour I had sitting in my eggboxed room (sound proofing!). Looking back, I should have taken pictures, I’d made a weird dalek type booth out of egg boxes, and I thought it looked cool! I also ended up with headphone dents in my head! I used a toy xylophone for stars in the water, a shaker egg, my guitar as a drum. The whole thing is really lo-fi what you hear is what you get kidna thing.

LIZZY: All sorts, my favourite genre is classic rock, because that’s what I grew up on thanks to the parents. But, at the moment I’m loving Elbow, they are such an incredible band, I find it weird that I’ve only just got into them, but am enjoying listening to all their older stuff.

VP: When you play live gigs do you, get nervous, do you have any pre-gig superstitions?

LIZZY: I always get nervous; I’d think something was seriously wrong if I didn’t. But as soon as I start singing, I tend to forget my nerves and just sing, the nerves kick in when I have to speak to the audience because I always crack awful jokes, but I can’t stop myself. My superstitions: I wear an Angus Young (AC/DC) badge for my gigs because he rocks. And I don’t know, it makes me think I too could rock! :)

VP: Talking of gigs is it just you and a guitar up there or are others involved?

LIZZY: At the moment it’s just me and my guitar, but am hoping in the future that I can do something different with other musicians, I’m going into the studio in February and working with a live band, so it’ll be great to see what I sound like with a band behind me. I can’t wait! If I do ever have my own band, I’d like to call it Lizzy and the Spits. Sounds a bit old fashioned, but I like that!

VP: What’s been your biggest thrill since getting involved in music?

LIZZY: There are two things. One: finding out I’d been played on BBC Radio 2, and two: playing to any audience. I know it sounds totally cheesy, but nothing has given me the sense of excitement and feeling of happiness that performing does. It’s really weird and I find it difficult to explain, but I just hate coming off the stage, even if people were throwing cabbages at me, I think I’d find it really hard to leave. It’s like stepping into a different world.

LIZZY: Yes, different is the word I was hoping for. I wanted to do something that stood out as a stand alone track on the album.  It’s about one moment in your life. Well, it was about one moment in my life last summer I had as I stood by a swimming pool at night, and I could see the stars reflecting in the water, but I was also blubbering about something that had happened to me and my tears had blurred what I was seeing, so I just wrote about that one moment. Which is why it only has one verse. I have plans to write a part two one day, but I haven’t had moment that can follow it yet.

VP: What other exciting plans do you have lined for 2009?

LIZZY: I’m recording with a live band; I’m planning to do a home made tour (everything is pretty much home-made with me!) I want to learn a new instrument and I’m hoping to ditch my own label and move onto a big Indie one. Fingers crossed. I’m super excited though!

VP: What’s the first single you bought? And the first album?

VP: If your press shuffle on your I-pod what are the first five songs that appear?

“Not After This” Live By Lizzyspit