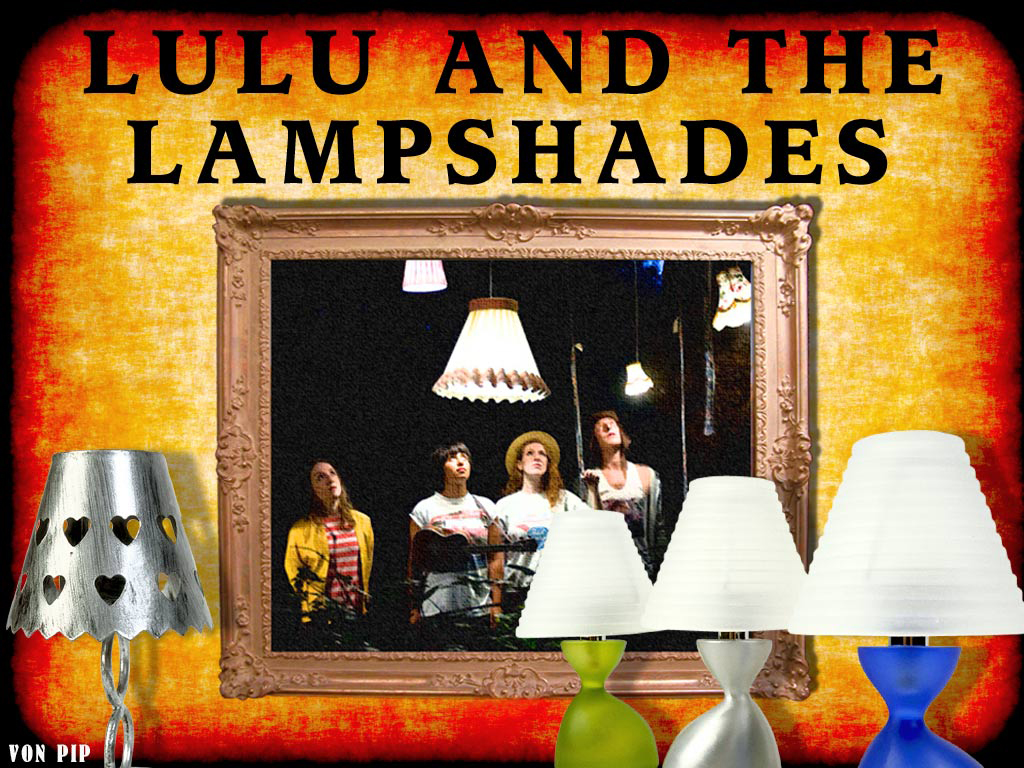 A girl called Lulu and her friends the dancing lampshades?? Good grief! It sounds like something that might have been commissioned for kids TV during the 60’s and early 70’s , a time when the counter-culture and consumerism collided and bizarrely kids TV seemed to be laced with none too subtle drug references.  There was the visual equivalent of the ‘Electric Kool-Aid Acid Test ‘in the disturbing somewhat freaky form of ‘HR Pufnstuff’. We had ‘The Magic Roundabout’ , replete with hallucinogenic imagery and moral corruption which introduced a generation of youngsters to some rather dubious characters including a tripped out rabbit called Dylan who, one suspects, was germinating something rather more powerful than carrots in his “vegetable patch !” And what of ‘Ludwig’? , This terrifying cartoon had “bad acid” writ large throughout and led to many children needing psychiatric help . I kid you not….

However I digress, Lulu And The Lampshades, aside from their name, have little in common with any of the above. They are in point of fact a musical collective best described as inventive alt- folk rockers with a whimsical sense of playfulness and an ear for a great tune.  A word of caution however, their live shows really do contain scenes of dancing lampshades which some people may find disturbing.  Hallucinogenic drugs are not recommended!

The free spirited ethos of Lulu And The Lampshades is apparent on their debut single “Feet To the Sky” a beautiful ode to escapism “For too long emotional extremities have been uncharted territories” sings Luisa as she seeks to shake herself from “the things I think that make me whole” It’s a call to arms, challenging people to look at things from a different perspective, to shake things up, to do something out of the ordinary and to put as little trust as possible in tomorrow and seize the moment.  “Feet To the Sky” is a fabulous introduction to the bands clever word play and sense of fun and will no doubt delight fans of Emmy the Great, Peggy Sue, Laura Marling et all, they are a band who quite literally, get the furniture dancing!!

Lulu And The Lampshades also share a deep love for their namesake, the humble lampshade, they nurse a deeply held belief that it is a vastly unappreciated item of furniture and should be celebrated. Thus intrigued I decided to have a chat with Luisa about the moral implications of fusing music with soft furnishings and attempted to shed some light on what made the band tick…The results were somewhat illuminating

VP: Hello there, how did the band come about? Who is Lulu and how did she meet her Lampshades??

Lulu:  Hi hey hello.  Lampshade past? Well I wanted to be in a band for ages, but I didn’t know anyone to be in a band with, so I made one up, and called it Helouisa (mine and Heloise’s names combined, clever no?).  We went to school together and it was the name we gave to all our entrepreneurial failures: t-shirts, cakes, hoodies with cushions inside the hood (another good idea I think) …  After a while it occurred to us to try singing together, but everyone said the name was rubbish and they were right.  Jemma agreed to play with us one night and we convinced her to stay and Dan we found at a furniture convention where we bonded over our love for lampshades and decided we would strive to see their appreciation in modern day society … more or less.

VP:  I know it’s difficult to describe your own music, but who said this was going to be an easy interview ;)…

VP:  You’re about to release a single “Feet to the Sky”, which was written apparently whilst cycling to Paris on a whim.  At 4am.  On New Year’s Eve. As you do

Lulu:  Kiiiind of, a few details to be remedied.  It was whimsical in as much as we decided to do it the day of departure, a few days earlier so that we’d get there in time for New Years Eve.  We left at four because we thought we’d miss our ferry, but that was the dumbest thing ever because it doesn’t get light for ages and we were suddenly on a dual carriageway in the pitch black with lorries whizzing by, very scary, we had to sit in a bush on the hard shoulder and wait for sunrise, we played ping to stay warm.  Aside from that it was completely magical, a perfect bit of escapism in cold winter.

VP: What are you doing to celebrate its release?

Lulu:  We’re having party! 26th of October at Passing Clouds just off Kingsland Road.  Details coming, Melodica, Melody and Me are playing, who I love so I’m very happy about that, and some others confirming … come, it’ll be grand.

VP: Aside from recording your debut single what have you been up to musically in 2009?

Lulu:  Forming a band.  This time last year it was still just me, garage band, and any boy I could get to strum a guitar with me on open mic’s.  Now there are permanent members, new songs, lots more gigs and the like. We spent the last few days making a video which we’re very excited about, Dan is dressed as a Duracell Bunny, Heloise is Little Bo Peep, and Jemma is Marie from the Sound of Music.  I wish they could dress like that all the time.

VP: What has been your most memorable gig so far?

Lulu:  Maybe one of our first for first times sakes… The Lock Tavern earlier this year, it was the first one with Dan and the first one where two of my friends agreed to dress as lampshades and dance for us.  We were so nervous and excited and we inevitably messed up loads, but it was so much fun.  When we got an encore we just had to sing Elastic Limbs again because we didn’t have any more songs.

VP: Who are your musical heroes and why?

Lulu:  It’s mostly just been a series of female solo singers, starting with Billie Holiday who I was massively obsessed with when I should have been into much cooler music.  The other biggest one I reckon is Lauryn Hill.  Apparently I’ve never been so excitable as when I saw her play at Exit (which was otherwise horrible).  I made sure I was at the front and was reduced to the screaming fan I never thought I’d be.  She came on an hour and a half late, and shouted her songs over a ska beat, rubbish, but I didn’t care in the slightest.

Lulu:  If we’re referring to interspace vices then I’ll be specific and say Facebook threads.  When I was writing my dissertation we started a Facebook message to plan summer whilst we were stuck in libraries, but then everyone got a bit hooked and it became my salvation, it was literally my life for about two months… so dependable, somebody was always there!  We started referring to it as a real person and christened him Malcolm, Dear Malcolm, today I … and so on.  Now he is embodied in a little red caravan.   Malcolm is my poison.

VP: If the government could appoint a minister for cool, who’d get your vote?

Lulu:  As a testament to how cool Brazilians are, they’re minister of culture is world-renowned musician Gilberto Gil, basically a minister of cool if ever one did exist. We compare thinly.

VP: What are the five most important words in Lulu And The Lampshades dictionary

‘Feet To The Sky’

“You’re Gonna Miss Me” Lulu And The Lampshades

This article was written for Altsounds and can be read in full here.

0 thoughts on “The Illumination Station-Lulu And the Lampshades Interview”