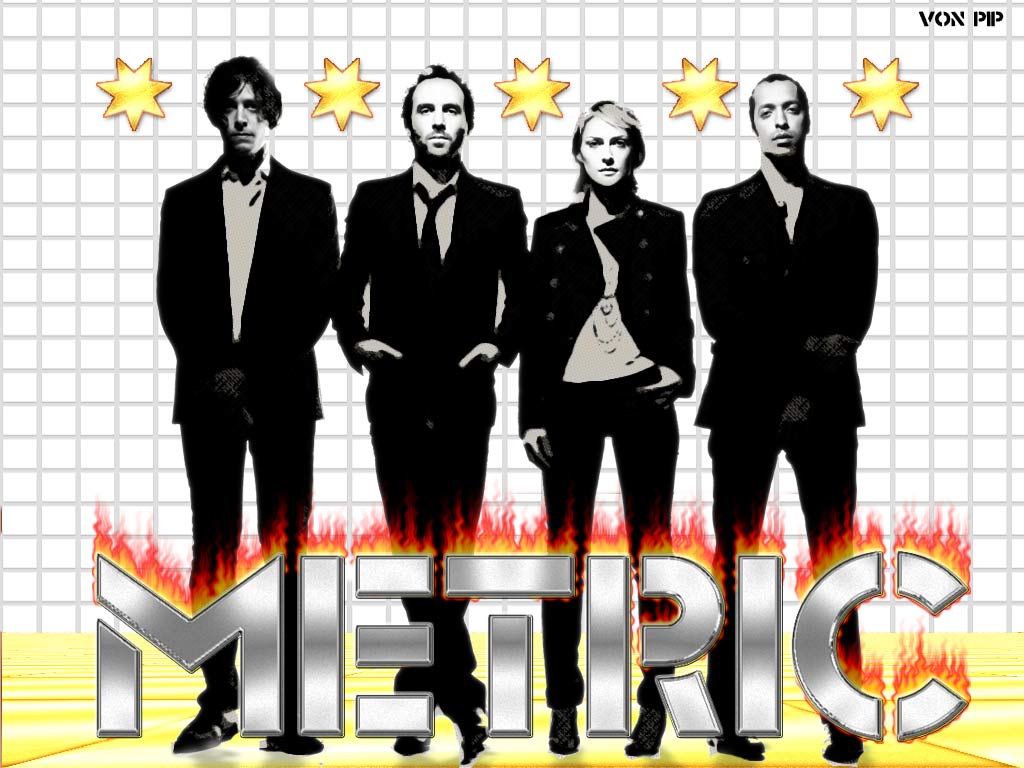 It’s hard to believe Metric have been around in one form or another for the best part of a decade. Despite the fact that they are huge in their home country of Canada, with multi platinum albums and sell-out gigs, they have enjoyed something of a cult status in the UK  whilst threatening on a number of occasions, to break through into the wider public consciousness.   Several song placements in hit TV shows such as “CSI” and “Grey’s Anatomy” means that many, this side of the pond, would recognise a Metric track, without necessarily knowing who the song was actually by. Let’s hope the release of their latest album “Fantasies” will address that particular quandary and help them develop the fan base their music deserves, in dear old Blighty.  Since the Metric’s last release band members have hardly let the grass grow under their feet, singer Emily Haines and guitarist James Shaw also perform with Broken Social Scene, and Haines has been a guest on albums by Stars, KC Accidental and Delirium as well as working on her solo project Emily Haines & the Soft Skeleton. With such an abundance of creative activity, it’s not hard to understand why Metrics last album “Live It Out” was way back in pre recession 2005, but in 2009 with the economy shrinking at the same rate as the chances of Lady Ga-Ga ever becoming anything other than hugely irritating, Metric arrive with a sound that is bigger and more accomplished than ever.

“Fantasies” is their fourth studio album and possibly their best work to date, the sleek production has given rise to a slightly more radio friendly feel but it’s done in such a way that is unobtrusive and merely serves to help the band achieve a sound that is bold and dramatic whilst still retaining their intrinsic “Metric-ness”.  True to their Indie roots the band are self-releasing and self-financing the album via their own global label, Metric Music International, as lead singer Emily Haines explains “It was strange having some real choices for the first time in our career while also feeling like whichever deal we chose was going to end up being restrictive and force us to compromise creatively. At one point, we just said ‘oh F**k it, let’s gamble’, took a deep breath and decided to put this record out worldwide our own way.”

“Fantasies” is definitely a significant step forward for the Canadian quartet in terms of consistency and the overall roundness of their sound and throughout, Haines’ always impressive vocals are underpinned by insistent guitars fused with majestic synth flourishes and thundering percussion, it’s also an album that’s jam-packed with potential hit singles. There is much to marvel at here, but what really marks out “Fantasies” as their finest album yet is the sheer melodic splendour of the song writing on display.  “Help I’m Alive” starts off as an eerie, atmospheric, edgy slice of  electronica  and ends up morphing into an anthemic Indie rocker, “Gimme Sympathy” is a definitive example of how to produce a perfect Indie- pop song, full of memorable hooks and a chorus to die for,  as Haines asks the age old question, “”Who would you rather be? The Beatles or the Rolling Stones” (the Clash as it happens, but there you go ;)

“Fantasies” looks set to gain Metric an army of new fans, and serve as a reminder to us old stalwarts what a great band they are and just how much we’ve missed the little scamps.  We were delighted to have an opportunity to chat to Emily and ask the sort of probing questions that makes Jeremy Paxman look like an amiable teddy bear who needs a great big hug.

VP: Your new album “Fantasies” is released April 14, and took a year and a half to complete , was it a conscious decision to take your time,  or did other factors come into play ?

EMILY: Yes for the first time since we started playing live as a band we gave ourselves a minute to live outside of being on tour. Jimmy built a studio and I went on a writing trip to Argentina. When we all regrouped in Toronto we had an albums worth of songs and a brand new studio of our own to record our album in our own

VP: What sort of influences came to bear on the song writing for “Fantasies”?  You’d mentioned in the past that because of constant touring you needed to “reconnect with your humanity” before you began writing your next album.

EMILY: Well All four of us have always been nomadic and I don’t see that changing anytime soon!  I get more inspiration from discovering new places than I do from listening to whatever band is of the moment. Getting away from myself and being introduced to visual artists and filmmakers got me back on track.

VP:  If fans pre-order the album from your website they also receive exclusive artwork from “Hollywood In Cambodia” Who are they and how did you come across them?

EMILY: They are Buenos Aires based graffiti art collective I discovered while I was there writing. They are the visual equivalent of Broken Social Scene.

VP:   What happened on March 30, 2008 at the Phoenix Concert Theatre in Toronto when you suddenly said “”I don’t want to play these songs anymore?”

EMILY: I was sick of being sad and was already well into writing “Fantasies” with Metric. When I play music I inhabit the emotion of the song and I do not fake it.

VP:  Have you a favourite track on the album or is it just too tricky to just pick one?

EMILY: You’re right, it is impossible to choose just one!

VP: Will you be playing any UK shows this year?

EMILY: Yes we start our UK tour in May

VP: What would you say have been the most memorable moments in your time as Metric?

VP:  The digital age has transformed music industry forever… How do you feel about it and do you think the industry has been slow to embrace the so called” digital revolution”

EMILY:  I do think the old music industry has been more interested in trying to shut down the future than in developing new ideas. That’s why Metric decided to put together our own label for worldwide distribution and make IloveMetric.com our international headquarters. The future is here and Metric delivers!

VP:  What music has been inspiring you this year so far?

The Raw Side Of METRIC