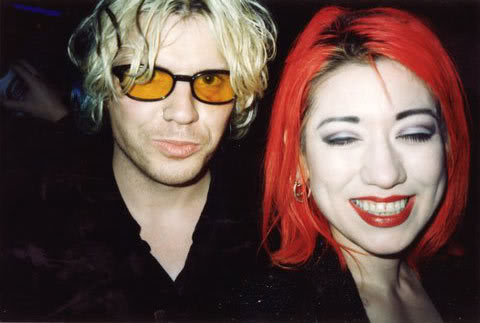 Miki: “Me with Ian Astbury (The Cult) after our gig at the Electric Ballroom in 1996. Chris was an absolutely MASSIVE fan of The Cult (well, back to when they were Southern Death Cult) and met Ian the first time during the Ride tour in 1991 in LA. Ian ended up joining us on stage in LA one unforgettable time to duet on the song Ciao! (the Jarvis duet on Lovelife). The really funny thing though was that when we went through it at the soundcheck, it became obvious that Ian had got a bit confused and thought we were going to cover the Cult’s Edie (Ciao Baby). We’re playing the intro and he’s going “It’s quite skiffle, isn’t it?”. Chris was laughing so hard he could barely play.”

Miki: “Interview with ‘Kennedy’ at the MTV Weenie Roast – a big production stadium gig that’s comparable to various media-run roadshows, but this is in a fucking huge stadium. There was a revolving stage so that as one band played, the next band could set up. That was the theory anyway. We were on after The Fugees who, clearly, had been booked into that slot shortly before they spent about a million weeks in the top ten with Killing Me Softly. As a consequence, they weren’t too keen on playing so low down on the bill and turned up late, spent ages setting up and then failed to leave the stage after their third song, a 15-minute rendition of No Woman No Cry. By this time the MTV organisation had had enough and as Lauryn Hill’s soulful vocals released the first strains of their hit song the stage started to revolve slowly and the rapturous cheering turned to boos as Lush appeared, startled and apologetic. Possibly the most Spinal Tap moment of my entire music career.”

Miki : With Mark Gardener (Ride) at Phoenix 1996. I only put this in because I didn’t have any photos from the 1991 tour and we’d had such a lovely time – the band and the crew were all really lovely and it was such a great way to have our first adventure to America.”

Photos 36 Is From Kat Bjelland (Babes In Toyland) own collection

Miki: “Photo shoot for Lovelife with the Fiat 500 car.”

“Love At First Sight” By Lush

“Light From A Dead Star ” By Lush (A Tribute)