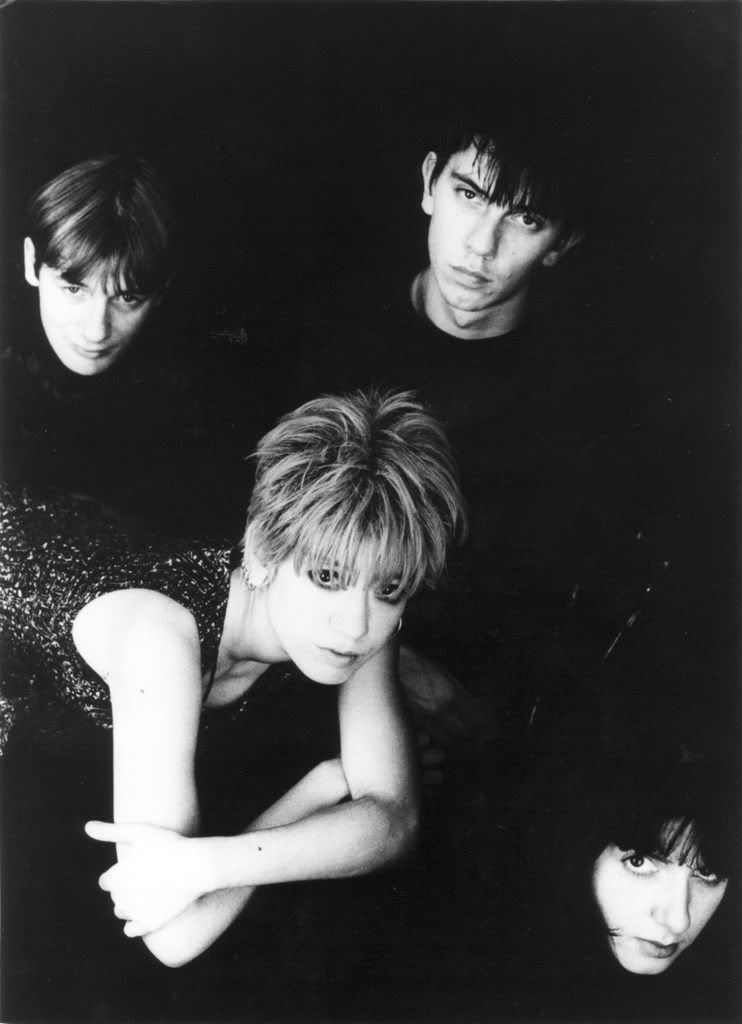 Miki has very kindly agreed to share her own photos from her time in Lush. So,without further ado or my customary waffling, I give you…
“A Pictorial History Of Lush-Much Loved, Much Missed”

Photo 3
Miki : “These first three are from 1989…1 and 2 are our first ‘proper’ promotional photos which were done by Suzy Gibbons. Emma had been working for Jeff Barratt (PR) who did Creation stuff and Suzy was going out with Guy Chadwick (singer in The House of Love, then on Creation). I don’t think we had to pay !”

Miki: “Pic 3 is from a photo session for French music mag Les Inrockuptibles by Renaud Monfourny.” 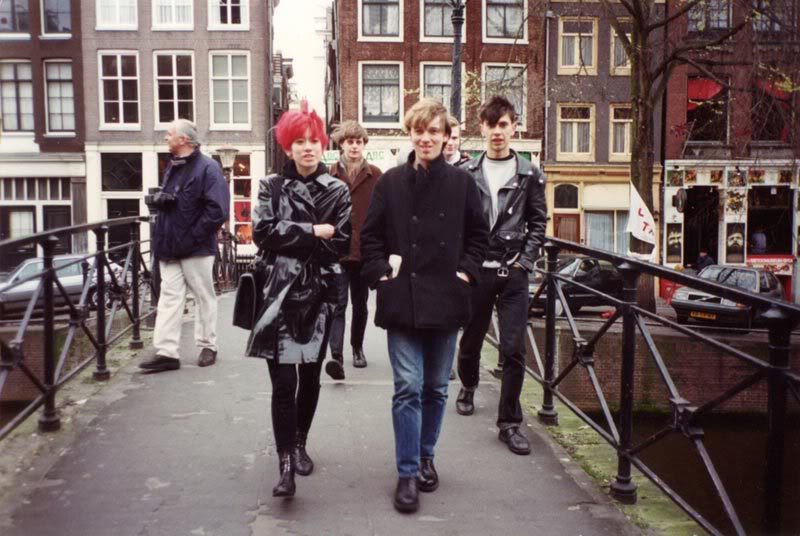 Miki : “Me and Steve Rippon (original bass player) and Chris in Amsterdam. We were on our first European tour with the Pale Saints (joint headline – we just switched who went on first each night). Their singer Ian Masters is in the background. 1990.”

Miki:On stage at the Roxy in Los Angeles, April 11 1991. Photo by John Talley. We were on our first US tour with Ride, co-headlining (same as Pale Saints, taking turns to go on first). 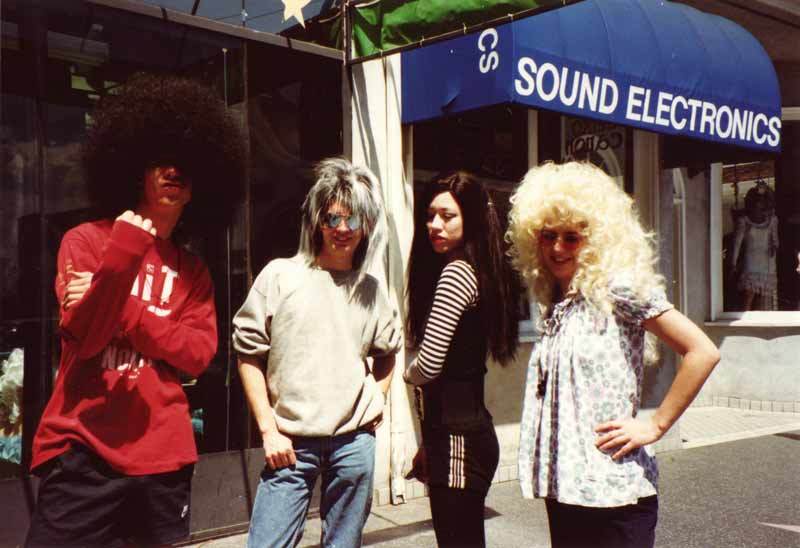 Miki: While we were in LA we did a feature for the NME. We went out for the day doing pics and at one point raided a wig shop … HOW WACKY!”

Miki : “Spurs go through to the FA Cup semi final, which leads
us on to… 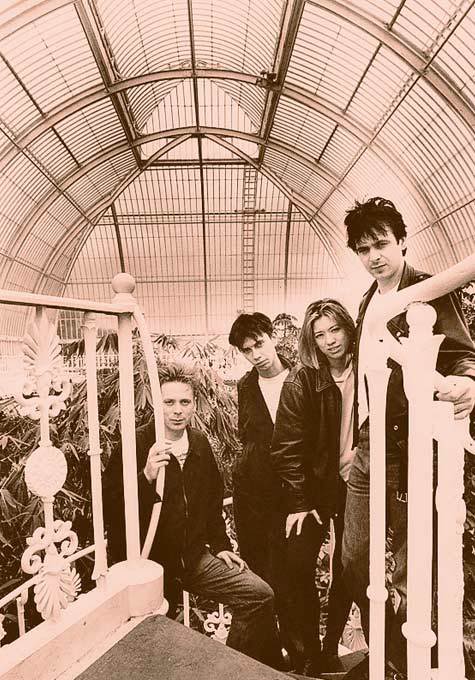 Photo 10
Miki: “The Lillies, L-R Simon Raymonde (The CocteauTwins), Chris, me and Russell Yates (Moose). We recorded a flexi for The Spur fanzine to celebrate our imminent failure to win the FA Cup. I remember a very very hungover photo session in Kew Gardens with photographer Piers Allardyce” 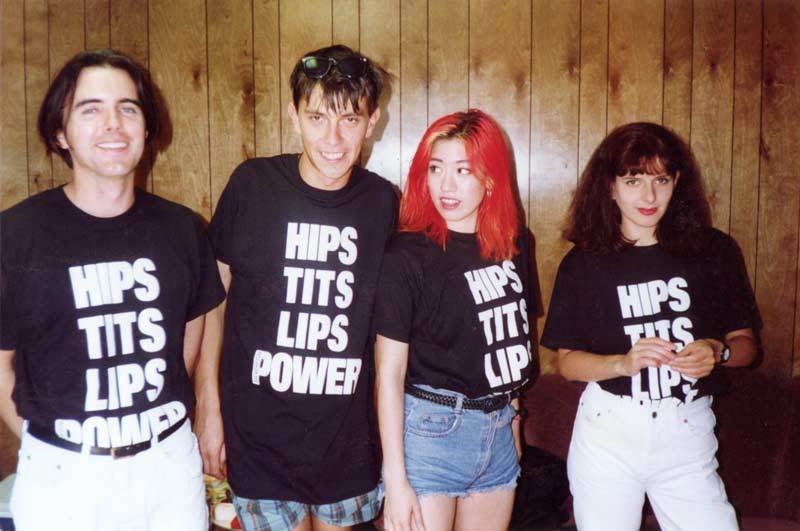 Miki: ” These are from the Lollapalooza II tour, 1992. Silverfish gave us t-shirts to wear for good luck on the first day.

Miki: “Outside the ‘Cheers’ bar in Boston. Sorry – we’re such tourists!”

Miki: “Chris and me after ‘drinking the bile’ with the Jim Rose Circus Sideshow. There was one of the freakshow acts where a bloke inserted a tube up his nose and into his guts and pumped a pint of beer in. Then he regurgitated it out of the tube and you had to drink it. Probably be illegal now, but 15 years ago it was like the Dark Ages and being on Lollapalooza was like touring a medieval village. Except for the air-conditioned motor homes. ” 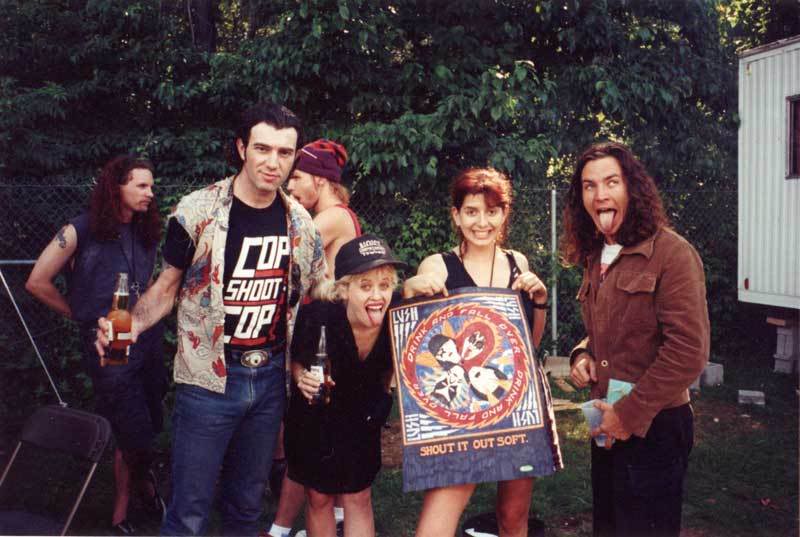 Miki: “We got given a poster by a fan, Lush in the style of Kiss. Here’s Emma sharing the moment with Kat Bjelland (Babes in Toyland) and Eddie Vedder (Pearl Jam).

Miki : “About to join Ministry on stage in Toronto (replete with Flying V) ”

Miki: ” With Al Jourgensen from Ministry.”

Miki : ” Emma and Chris join Soundgarden on stage to play drums on Cop Killer. It became a bit of an ‘event’ – I know it sounds horribly cosy – all that ‘bands on stage with one another’, but it was a genuinely good atmosphere (bar one or two notable exceptions!) . Also on drums is Bill Rieflin, then of Ministry, now in REM. I think by the time the tour ended there were about 10 people drumming on stage to that song. ”

Photo 19
Miki : ” Me in the crowd watching the Jesus and Mary Chain, which I did EVERY day of the tour, bar one…

Miki : “…And When we joined them on stage for backing vocals on “Far Gone and Out.”

VP: “And how where those volatile scamps the Reid Brothers ?”

Miki : “I guess that they spent a lot of time locked in their dressing room having blazing rows. I remember toward the very end of the tour I was having a drink with William and he suddenly expressed regret at having avoided much of the socialising, saying that he felt sorry he hadn’t enjoyed it more. To be fair, the Mary Chain had a really difficult slot on the tour. Pearl Jam had originally been booked to go on second (right after us!) and in the intervening months their popularity had gone through the roof to the extent that they could have virtually headlined. Being extremely un-starry though, they insisted that they go on in the same slot they had been originally booked for. This was great for us – it meant that the venue was already full, even at 2pm, because everyone turned up early to see Pearl Jam! Not so great for the Mary Chain, though, who had to play right after. Don’t get me wrong, they had a ton of fans and a great response, but to follow this band who were on the up and the audience was chucking themselves around to… well, it can’t have been easy. I watched them every gig though (except one, when we had to evacuate the area because of a hurricane!)

Miki : “And then of course we had our own people join us onstage too. Mike McCready (Pearl Jam), Bill Rieflin (Ministry) and Mr Lifto (Jim Rose Circus Sideshow). The requirement was to drag up (obviously).”

Miki: “Me and Phil on the video shoot for Hypocrite. ”

Miki: “Me and Chris doing the tourist thing in Sydney, Christmas 1992. ”

Photos 24 & 25
Miki : “Lush as ‘Man About The House’ for the NME Xmas edition 1992. Poor old Chris HATED it (wonder why?!) but Phil was in his ABSOLUTE element. We virtually had to wrestle the chest wig off him”

“God, I’ve suddenly remembered that me and Emma did another NME Xmas dress up thing as The Liver Birds, which would be rather perfect for you, no? I`ll go and look for it”

Miki: ” Phil and me at a photoshoot for Raygun magazine in New York. They styled us in all this Paul Smith gear which the boys were rather keen on running off with…”

Miki: “Phil enjoying a jacuzzi bath in the hotel room in Detroit, 1994.”

PART ONE IS HERE