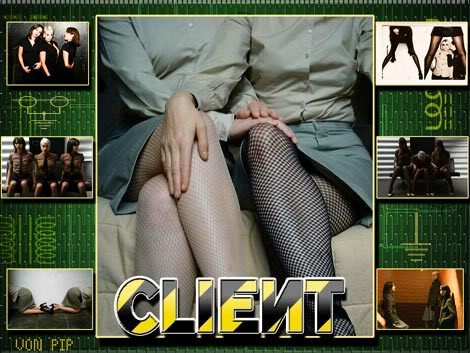 “6 In The Morning” By Client

Sexier than Goldfrapp, darker than Depeche Mode, more fun than The Human League? Yes, if you like throbbing electro pop perfection then you certainly need look no further than the splendour that is “Client” Members of group are known only as Client A and Client B and are often joined by occasional members who conveniently share similar names such as Client D,E,F,G etc .(is there hope for “J” from Five?) However the mainstays of the band are in reality Kate Holmes, formerly of Frazier Chorus and Technique and Dubstar vocalist Sarah Blackwood. Their take on electro glam synth pop has been a huge hit in Europe, whilst they have been quietly bubbling just under the radar in the UK for a while now. This years album “Heartland” is typically, hypnotically, brilliant, it flirts with the listener ,whilst drawing them into Client’s darkly erotic world, they promise to seduce and then state in no uncertain terms “you can look, but you can’t touch.” (bah!) and then of course there are “the uniforms!” For anyone with thing for airhostess, or maybe leather or quite possibly both, Client’s image will doubtless be a draw, indeed it would be no stretch of the imagination to suggest that they make Alison Goldfrapp seem about as sexy as Thora Hird wearing incontinence pants. But this regimented look fights in perfectly with the music and whilst their image is undoubtedly something which is visually provocative, and, without sounding like Benny Hill hiding in the bushes in a mac, rather naughtily pleasing, it is undoubtedly their music that really grabs the attention. Client are a relentless, hypnotic tour de force combing sweeping synths, guitars and glam rock beats fused with a fabulous pop sensibility. They have collaborated with a number of high profile musicians and directors, their video for “Pornography” was directed by French director Jamie Deliessche . It featured Carl Barât (formerly of The Libertines and now singer with The Dirty Pretty Things on vocals. “Down to the Underground” features Pete Doherty, also formerly of The Libertines, and when not being detained at Her Majesties pleasure, sometime front man of Babyshambles. “Overdrive” features Martin L. Gore of Depeche Mode and “Where’s the Rock and Roll Gone” features Tim Burgess of The Charlatans.
Lager fetishist Mr VP donned  his studded leather lederhosen and thigh length boots and had a chat with Sarah Client B to discover more about the band…

VP : How,where and when did you meet ? What prompted you to form Client?

Client B: We were introduced by a friend. Kate had just been offered 3 gigs supporting Depeche mode and her singer had run away!!! I stepped in.the 3 gigs turned into 15 and we formed Client and wrote the first album on the road with Depeche. At first we were just experimenting but our epiphany came at the leipzig gig where we decided to really go for Client!!

VP: If you were to verbally illustrate your music using media friendly sound bites what would they be ?

VP: Your image is very impressive and rather striking, the uniforms? Was that something decided on at the outset ?

Client B : Absolutely yes! We wore them on the Depeche tour as we wanted to look like working girls not ‘popstars’…we didn’t want anyone to throw anything at us! It was also following the tradition set by electronic pioneers such as Kraftwerk and Throbbing Gristle.
We loved the Orwellian theme of letters not names became clients A and B and the image and music are now 50/50.it wouldn’t be Client without the uniforms!!

VP: Your latest album the marvelous “Heartland” was released this year, described as perfect electro new wave disco pop ! Who would you say your major musical influences are?

VP: You’re now on your own label in The Uk , has this made major difference to you as a band , is it harder or does it give you more freedom ?

Client B: Defiantly more freedom! It’s great to be completely in control!

VP: Will you look back on 2007 with affection? , what have been your highlights ?

Client B: Absolutely! It has been our busiest year for touring so far.I think the highlights were playing the festivals in the summer.we played to big really appreciative crowds and it was such a buzz!!!! Especially when we turned round wiggled our bums as the lights go out
and they all screamed. It made me feel very emotional!!!!

VP : Ok, so the band members are Client A And Client B , is there a Client C or D in place yet ?

Client B: Oh yes! It’s always going to be 3 girls on stage now and Robert Gorl sometimes too! He is client R !We also have another Client R and Client M and Client C too!! Client C is Charlotte Hatherley who played with Ash! (and former VPME interviewee)

VP: What’s your view on the music scene in the UK at the moment ? Any bands that grab your attention ?

Client B: We don’t spend enough time in the U.K. to hang around the various scenes but there seems to be a lot of post punk influenced bands around as well as the nu rave thing which is the progression from electroclash…all style no substance…and I wore day glo the first time round and it looked terrible then…..

VP: What’s the weirdest fan request/Message you’ve ever had ?

VP: Use five words to sum up Client’s time together

Client B: Exciting…frustrating…airports….adventures…..wonderful…..I love it!!!!

(Additional thanks to Dave Cromwell)

The CLIENT VIDEO PODCAST on iTunes

Join the free Client Podcast on iTunes
Subscribe to it to get the latest episode direct on iTunes!

“It’s Not Over” By Client