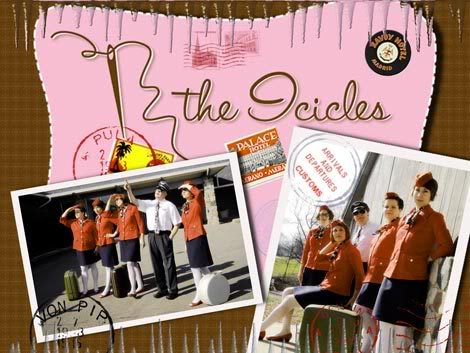 “Songs For Warm Days And Cold Nights” ……Hailing from Grand Rapids, Michigan, U.S.A. The Icicles boast the sort of tunes that would surely touch the most dispassionate, unfeeling of souls with their sweet melodies and sublime vocals. It’s perfect pop to warm the cockles of your heart and have you tapping your foot with delight. Their debut album “A Hundred Patterns” released in 2005 was a huge critical success, which later led to Motorola, picking “Sugar Sweet” as the theme song to a worldwide ad campaign in November 2006. They have recently released their second album “Departures and Arrivals ” and “great Scott of The Antartic” it’s a corker of an album! Is it Indie?Is it Twee? Is it retro folk pop or grindcore two step Nu-gaze ?- Who cares !!! Throw these ridiculousily contrived genres out of the window and just enjoy the warm fuzzy glow that the music provides without any peconceptions. It’s as soothing as a summers breeze, as warming as a mulled wine on a frosty day. The Icicles provide a great big earful of happiness, which induces feelings of wanting to dance with the same care free abandon that only embarrassing inebriated mad uncles at family weddings can muster, conversely at other times you`ll be content just to sit in your favourite chair relaxing with a dopey, yet satisfied grin on your face. “Departures and Arrivals” is a lovely slice of pop, influences such as 60’s girl groups,folk,even Blondie and Camera Obscura subtly reveal themselves but these are merely reference ponts and never overwhelm the listener. In a perfect world it’s how music should sound:- sweet, touching and from the heart…The Icicles have arrived so prepare to be swept up in their dreamy euphonious refrains….

VP: Where When and how, yes how did you all meet up?

Gretchen: Joleen and I went to college together and played music in our apartments when we were neighbors. The band originally started with Korrie Sue who was another college friend. We flyered for our original bass player and that was the beginning of the Icicles. Things changed up a bit and we were suddenly on the look out for a new bass player. Emily was a friend of ours who we met at various pop shows. She learned our songs and wowed us when she tried out for the band. Soon we were looking for a new drummer as well. Greg, too was a friend we know from the local music scene. After recording our first album together we loved having a Jeff Baron (from the Essex Green & Ladybug Transistor) as guest lead guitarist and thought it was time to find someone of our own to fill his shoes and approached Rebecca. We had all been aware of how great her guitar work was and after some hesitation about her possibly saying no, we finally sucked it up and asked if she would consider joining us. And it’s been dreamy ever since.

VP: For those who are new to the Icicles what can they expect?

Joleen: To smile, blush, toe tap, sway and may be even get up and dance.

VP: What have been the highlights of your time together so far?

Joleen: Playing music for people is the biggest highlight. Travel is also a huge highlight and meeting so many nice people.

Gretchen: Having been featured on a Motorola/Vodaphone ad and a Target Ad (here in the US). Touring has also been absolutely amazing. We’re REALLY looking forward to the UK!

Joleen: We have brought ice storms to the southern states and rain to the desert. We have a fear of weather. It must be our name!

VP: What were the first records you all bought?

Emily: REM “Out of Time” and Lisa Lisa and the Cult Jam (not necessarily proud of that one)

VP: Any bands in The UK that appeal to you all at the moment?

Joleen: M.I.A. and The Go Team

VP: In the UK we are awash with reality TV and Pop Idol type shows, is this the same in the US? What do you make of this “American Idol” malarkey?

Gretchen: It’s non-stop here! We’ve got American Idol, American Band, Making of the Band, America’s Most Talented and the list goes on and on! I don’t really dig these shows.

VP: Social networking. Myspace, face book etc, a great way of getting heard, or eroding the very fabric of society

Gretchen: I think it’s a great way to connect with people and a great way of getting heard indeed. I think that for bands they are a great resource!

VP: Who are your Heroes musical and also non musical ?

Emily: Musically mine include Paul McCartney, Morrissey and AC Newman, all fantastic songwriters!

VP : You plan to come to the UK soon, where you can sample the delights of rain, flooding on a biblical scale, anti social behaviour and of course Tea and scones… Any news?

Emily: We will be starting our tour out in Sweden and Denmark and then heading to the UK for the second week. As of right now we have shows booked in London, Birmingham, Pontefract and the West Midlands for the Indietracks show. We still have a couple open days that we might fill, but if we don’t it just gives us more time to try to dodge the rain as we enjoy tea on our days off! We’ve all vacationed in the UK before, but the band has never toured or traveled there all together, we’re very excited and counting down the days.

VP: Where on earth did you get those lovely Uniforms for your promo photos?

Gretchen: We made them! Joleen is the head seamstress in our group. She is amazing! (Check out her Web site: www.flutterfashion.com) She spoiled us with the fantastic flight attendent costumes for our cd release party jackets hats and all!

Joleen: Matching outfits are part of living the dream so there is a lot of sewing going on and every one does their part.

“Regret” By The Icicles ( Live on LiveBlock Radio)