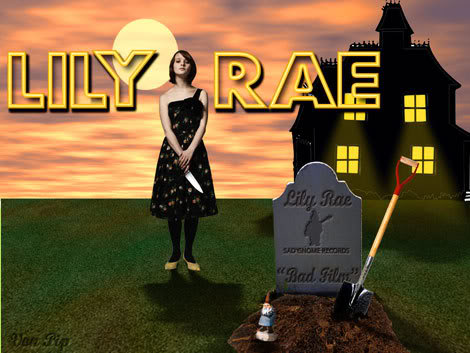 If you were to cock a furtive ear to the horrible turgid soulless cacophony that commonly clutters up the pop charts you’d be forgiven for thinking that music was about as meaningful as Davina McCall’s contribution to high quality TV. But if you where to go online and visit many of the musical platforms available you’d be heartened to see (and hear) all manner of talented whipper snappers making the sort of music that makes the world a happier place. On my cyber travels one name kept popping up, “Lily Rae.” I then happened to hear of her mentioned in conjunction with Sad Gnome records. This should have pleased me, as I’m keen on Sad Gnome Records, with their excellent taste and stylish demeanor. But subconsciously I may have made another mental connection. You see I used to work with a chap whom I better not name, called Dave Rae, he was a horrid little shite, vertically challenged, with a nose so big it would arrive in Liverpool City Centre half an hour before he did. A real evil little gnome of a man. A bad sort, maybe unbeknownst to me, I had foolishly associated Lily’s surname and Sad Gnome with this chap (whom I best not name) Dave Rae, and I failed to investigate this young ladies talent. Or more logically (always my strong point,) I just didn’t have the time, I’d been distracted or I’d simply forgotten, like the lumpen headed oaf Iam (so much music, so little time.) Some weeks later I’d heard Julia and Simon of The Indelicates mentioning Lily in revered tones, and then not long afterwards Sad Gnome Records gave away a free Xmas download. I enjoyed Lily’s contribution immensely and scuttled off to her myspace page, sideways like a man crab, giving no more thought to evil gnomish ex work colleagues. Why had I not done so earlier? I discovered she had sang previously in a band called Bottle Rocket for about three years, until, as she describes it “after that particular musical expedition went tits up, so to speak, I decided it would be far easier (and more diplomatic) to just do it on my own.” Her songs are a joy, superbly structured, beautifully sung, with lyrics as clever as they were witty. Some of the best I’d heard in quite some time. Her debut single “Bad Film ” backed by the equally excellent “Scallywag” is to be released in January 2008- it’s rather marvellous. An impressed Mr VP had a natter with Lily and found out more about her musical world.

VP: . Ordinarily I normally ask “how did you meet?” As my opener ,but that wont work here. So instead maybe you could tell us how you came to be involved in the world of “music” ;)

Lily : Well, my Dad – who’s one of my Saturday Girls – was in a fairly dodgy rock band about twenty years ago called King Swamp, which was all ripped-jeans-and-feedback – so from a really early age I was being carted around gigs and festivals. There was always music playing in our house, as well; my Dad would be listening to Tom Waits in one room and my Mum would be listening to the B52s in another, so you literally couldn’t move for hearing something weird. It just became part of life in the end. Silence was horrible and dirty. And then I got a bit older and was very heavily into Morrissey and Kirsty MacColl, and that was the end of me.

VP: Your single Bad Film has just been released (28th January) on Sad Gnome records , what are your musical plans for 2008?

Lily : First and foremost, we need to get out and about with some more gigs. I’ve also got songs coming out of my ears at the moment, so I’ll be recording like a bitch from hell for quite a bit… I’d like to think we’ll have something resembling an album ready by December. That’d be nice.

VP : How would you describe your music?

Lily: I’ve dreaded this question for a while… I’m often compared to Kirsty MacColl, which is probably the best compliment I’ve ever received, but I think she was a lot less bitter and cross than I seem to be. My songs are all a bit on the “I’m Very Angry And Nursing A Lot Of Grudges” side. Oh sod it, we’re trying to be Sleeper for the 21st century. There, I said it.

VP: Who would you say are your musical inspirations?

Lily: I’m of the opinion that Jonathan Richman is the most perfect songwriter alive. Kirsty MacColl has always been a huge influence of course… early Morrissey goes without saying… Elvis Costello too, and I’ll finish up with Aidan Moffat (Arab Strap). If I’d written so much as one song off Philophobia I’d just lie in bed all day, chatting myself up.

VP: Have you played many gigs at this point? What have been the best experiences so far?

Lily: In Bottle Rocket we had gigs on almost every week – the best one I think we ever did was at Storm in Leicester Square, a couple of months before we split. That was amazing. In the crowd we could just make out two guys in Hawaiian shirts who were going absolutely mental over What’s She Got? which is good for the esteem whichever way you look at it. Admittedly gigs have been a bit low on the ground of late, for no other reason than we all seem to be terrible busytits at the moment, and we’re also lazy bastards who book gigs maybe once every couple of months. But we’ll be around more this year, you’ll be sick of us by the end of it. Maybe you already are, which means our careers are speeding up at least.

VP: Are there any bands/artists or musical styles that induce such intense feelings of dislike upon hearing them that you feel compelled to throw the radio out of the window. Or at least turn it off in a hurry?

Lily: Oh Christ, here we go. The Twang, the Enemy, the Pigeon Detectives, the Fratellis and The View made me actually vomit up my own kidneys once, and that’s not an exaggeration. I guess they’re easy targets but I’m ashamed to be British if all we’re about is ripping off the Libertines. I’m not a huge fan of Kate Nash either – she’s probably very sweet and lovely and all that, but her voice just makes me want to burn hair. U2 should’ve packed it in years ago. Don’t even get me started on Hard-Fi. The only band I feel any remorse for disliking are Belle and Sebastian – I can tell they’re an excellent band, but that doesn’t stop me wishing they’d just shut up and stop being so clever.

VP: New technology, i-pods , mobile phones that clean teeth, DAB toasters that are entertainment centres, do they enslave or liberate?

Lily : It depends how quickly you want your shiny new iPhone to get nicked I suppose. I’ve got a lovely little mp3 player that no-one would ever knife me for because it’s too ugly – I suppose if you’re from Hampstead it’s a lot easier to have hundreds of little life-enhancing gadgets on you than it is in Streatham, where I live. I think that, if it does its job, there’s no need to get a slightly shinier one with more buttons. If I had a James Bond mobile the size of a baked bean with bluetooth and 600 gigabytes for mp3s and an eight billion pixel camera and a nutter bastard little device that made everyone want to sleep with you, I’d probably be a bit embarrassed. Probably.

VP: Any new bands you think will make the grade this year and have a major breakthrough?

Lily : Well he’s been around a little while now, but I’m really hoping that this year Malcolm Middleton will get the attention he deserves. A close friend of mine would argue that if he had masses of success the depressive jilted bedsit miserablists that make up his fanbase (me included) would feel like they’d been dumped for sunnier mainstream audiences. I don’t think that would be the case though – there’s too much empathy involved for him to do that. I would’ve liked I Am The Arm, a bloody excellent band, to have really made it this year, but they’re splitting up after one more batch of gigs. It’s about time Of Montreal got a bit of recognition as well. And the Veils really should be household names in the UK by now.

VP: What are the first singles /albums you remember buying ?

Lily: I was a huge Proclaimers fan when I was younger so I bought everything they’d done when I was about ten. When I met them they signed my copy of This Is The Story and I was so excited I didn’t particularly mind that they’d spelt my name wrong. Free All Angels by Ash had a HUGE impact on me when it came out and I spent the next few years trying to be Charlotte Hatherley. I can remember buying Homogenic by Bjork really clearly as well – I only bought it because I liked the cover (it was quite squishy) and then I actually listened to it. It blew my mind completely. When you’re nine you shouldn’t really try and sing Joga unless your parents are already deaf.

VP: Excluding oxyegn and food and erm.. life what five things could you not live without?