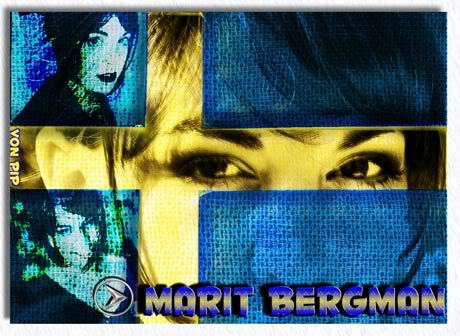 “Alone Together” By Marit Bergman

To kick off The VPME’s look at the Swedish music scene what better place to start than with one of Sweden’s most talented and engaging singer / songwriters, Marit Bergman.

Liv-Marit Bergman was born 21st May , 1975. She grew up in Rättvik, moved to Stockholm and now lives in New York. She was also a member of 1990s Swedish punk band Candysuck as well as being involved in many other side projects and musical collaborations. However, it is for her solo work that she is best known for in Sweden, receiving critical acclaim and picking up a large and loyal fan base . Her first solo release was in 2002 with the album “3.00 A.M. Serenades” on her own record company Sugartoy Recordings. The record received huge success and was re-released by RCA/BMG in 2003.

Her second album,” Baby Dry Your Eyes”, was released in March 2004 to further critical acclaim, which earned Bergman five Swedish Grammis nominations and two awards – Composer of the Year and Female Artist of the Year. In 2005, a live-DVD, “Live at Rival” was released.

In 2006, Bergman released her third solo album, “I Think It’s A Rainbow” which was again a huge success . Marit’s music is now starting to get the attention it deserves from all over Europe and in the U.S.A. -and not before time !

The VPME had a lively chat with Marit and asked her “What’s it all about?”

VP: You’ve been described as Sweden’s Indie Queen and even the Swedish Alanis Morrissette , but how would you describe your own sound?

Marit ; Interesting! I’ve never heard that Alanis-thing before. I am not naked with a blurred crotch in my videos! I’ve never been to India! I fully understand the actual meaning of the word “ironic”! I’ve never even done a cameo on “Curb Your Enthusiasm”! As you can see, old Al and me don’t have that much in common.
I would describe my music as pop. Emotional pop. But not emo (neither in the 90´s nor 00´s sense.) A lot of feelings. Lyrics are mostly very upfront but as I get older I get more poetic. A lot of songs on my albums have horns and strings.

VP: In the last couple of years you’ve moved to New York, was this purely a music decision, and what do you miss about Sweden ?

Marit : Believe it or not it has absolutely nothing to do with music, really. It’s just that I’ve realised that I don’t have to live in Stockholm. I love NY and I also would like to live in other places. Maybe Spain. We’ll see. I’ve been in Sweden all summer playing the festivals and I guess what I will miss about it is my family and my best friends.

VP: Your third solo album -the excellent “ I Think It’s A Rainbow” was released in 2006, is there any news of any new material on the horizon?

Marit : Thank you dear! I’m writing all the time. You will get to hear these songs very soon, somehow. Can’t tell you much more right now.

VP: What have been you highlights of 2007 thus far?

Marit : As always, pop camp for girls ( that I work with every summer in Sweden) is always ridiculously fun and inspiring. Other than that, I think probably the tour that we did with the Pipettes in Europe in the spring must have been among the best things I’ve done in my life. I felt very popular. What more. Singing with Frida Hyvönen in New York and in an old limestone quarry in Sweden. Playing the Peace and love festival in Sweden. And the Pride fest. Ah. It’s a lot!

VP: What do you think of the current music scene?

Marit : It’s shite! It was better in the old days! No but really, I don’t know, lately I’ve been out of the loop completely. I only listen to Vera Lynn, Alice Coltrane… old stuff. And Amy Winehouse but that’s so retro it doesn’t really count as current does it. I like the Field. ( Swedish techno). And Frida Hyvönen is an absolute genius and I’m really looking forward to the new Jens Lekman album.

VP: What do you think it is in the Swedish psyche that inspires people there to write such great pop songs?

Marit : Our urge to be loved. I don’t know. We grew up with Abba, there’s no escaping it.

VP : And which Swedish bands would you recommend ?
Marit : Jens and Frida And The Field.

VP: You’ve performed in Europe an US this year with the Pipettes And Smoosh do you have any plans to perform in the UK in the near future ?

Marit: “Maybe. Maybe in November. I’m working on it. “
VP: Describe your self in five words?

“No Party-(Live, NYC)” By Marit Bergman