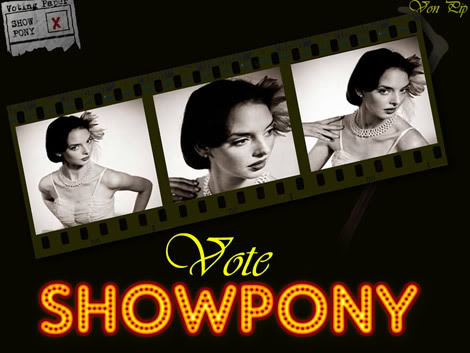 “Tie Me Up, Tie Me Down” By Vote Show Pony

There are many strange and mythical stories with regard to how, talented artistic folk begin their arduous journey in search of rock n roll Nirvana, or Pop Utopia. Many regale us with tales of chance meetings, the guiding hand of fate, Boo Radley type moments of clarity, an inner calling, or making a Faustian pact with Simon Cowell ( which as you know is something that really gets my Goethe ) and so on and so forth. Vote Showpony’s manifestation is indeed a little odd, the story unfolds as follows; a nice, polite young lady called Sorcha and her chums decided to hire a tour bus in order to attend a music festival. Nothing odd about that, you can have a drink, not worry about driving and you don’t have to spend the night sleeping in a muddy farmer’s field surrounded by people, who for the festival duration at least, have abandoned personal hygiene and social etiquette and snore like warthogs. Nor will you suffer the foul hellishness that is the dreaded festival toilet experience. Where things get a little odd is when the chums in question ask “We have a tour bus, therefore should we not have our own band name?” “Yes indeedy” replies Sorcha “We shall be called Show Pony and we shall neigh like wild horses when we say it” and so it came to pass and during the festival Sorcha and her pals would tell anybody who would listen, and many who wouldn’t, using the medium of fake Dutch accents, that they were members of a band called “Showpony”. …Alas after the festival Sorcha deemed her friends unworthy (more on this later) to be blessed with such a wondrous name and decreed that she must take on the mantle and became “Vote Showpony”.

With Vogue cover star/Audrey Hepburn looks and Kate Bush meets The Scissor Sisters theatrics, Vote Showpony has all the right elements in place to be huge. Her brand of glitzy, sexy, electro pop glam is something that has had the inhabitants of VP Towers tapping their toes with glee and songs such as “Dirty Words” had many needing an ice cold shower. A visit to Youtube to view Vote Showpony performing had grown men openly weeping with joy, and the news desk at the VPME suddenly resembled Sodom and Gomorrah as people danced, pranced and frolicked with carefree abandon to the Pony‘s flirtatious brand of pop…..Be warned this is the effect VSP can have on you unless you keep a very tight “reign” on yourself, it can change the way you see the world …. For my part, now when I listen to Father Ted Crilley joyfully singing about his lovely horse, it takes on a new poignancy, and I find myself wistfully sharing his sentiments

“My lovely horse running through the field,
Where are you going with your fetlocks blowing in the wind?
I want to shower you with sugar lumps….”
And I really do …..Ahem…

Vote Showpony has the style the talent and the looks to be quite rightly regarded as one of the hottest new acts in the country and it’s about time these daft A&R folk woke up to fresh exciting talent instead of playing it safe and signing dreary Indie by numbers bands or soulless, utilitarian, manufactured corporate pop. So with the bit between his teeth (un)stable boy Von Pip, fairly galloped off to meet up with Miss Vote Showpony to ask her about her peerless, perceptive, perky, pristine, perfect pony pop and “saddled” her with a “crop” of his usual brand of shrewd and insightful questions (delivered with the utmost modesty obviously)

VP: Who are Vote show Pony? Is it true you formed on a bus on the way to a festival?

VSP: I morphed into Vote Show Pony after a long weekend at a festival, but I also have an incredibly talented & very hot band made up of Blue May, Ray Djan , Jon Shone & Jodi Milliner. I co-write all my material with a couple of writers including my MD Blue but most of it has been co-written & produced by the very talented Death Metal Disco Scene. I love writing with him, as he is just as eccentric as I am. We met over a penchant for being called ridiculous names! Now back to the festival question. The first ever Bestival was where the first pony seed was planted. A bunch of my friends & I went to it & managed to score ourselves some cheap tickets so we had to pretend to be a band. I decided we should be a Dutch band called the “Show Ponies” & we would go around telling people that we were the “Show ponies & we like to rock”. We fell apart after various members of the band let our mascot St John (a helium balloon in the shape of a pony…. freaking genius!) fly off into the night. It was the last straw for me! They did not deserve the name Show Ponies after such sacrilege of our mascot. The ‘Vote” part of my name came about because I have a slight obsession with rosettes and the words “Vote Show Pony” look special when they are on a rosette. Rosettes are big in the equestrian world see!

VP: How would you describe your sound?

VSP: Ohhh gosh I always find this question tricky, only because I have so many influences I love. Maybe the result of a love triangle involving Blondie, LCD Soundsystem & Roxy Music. But above all else VSP sounds like fun!!

VP: What sort of music would you normally listen to when not being a Show Pony?

VSP: I’m an out of the closet pop fan, I love stuff that makes me smile, anything from LCD Soundsystem to Girls Aloud. Right now I can’t stop listening to the MGMT album, I almost cried the first time I heard “Electric feel” because I didn’t write it. I mean seriously, the lyrics “shock me like an electric eel”. AMAZINGGGGGG!!!

VP Dirty Words is a bit saucy, has this led to any odd myspace messages

VSP: It is a bit saucy isn’t it, hehe! Thankfully no I haven’t had any odd myspace messages. Maybe now that you have pointed it out I will. I shall keep you updated on that one!

VP: The Photos on myspace are very glam, and portray you in a few different guises, is your image something you’ve thought about a lot or do you just enjoy dressing up?

VSP: Well it’s a bit of both. I love dressing up because I think dressing up is an extension of someone’s personality & I use dressing up as a bit of a mask, I feel much more confidant when I’m dressed up all glam. Also if you name yourself “Vote Show Pony” you can’t really just turn up in jeans and a t-shirt can you? The Scissor Sisters & Gwen Stefani always look so striking & visually stimulating. I love a bit of visual stimulation!!

VSP: I have a single coming out on an independent label in a couple of months. I am very excited about this as the song is one of my favourites, it’s called “Love Hearts” & it’s all about being so in love that you feel like your seeing love hearts! It’s a bit psychedelic really! I am also releasing a limited edition 7″ of my track called Strut. Apart from that I’m going to keep writing & performing & just being happy. I also may go blonde. Controversial I know.

VP: If Simon Cowell was sitting here, now, on that couch, just over there, by that huge “Peace Lily” ( which looks a little limp) “what would you say to him?

VSP: I would ask how his brother is. We went on a date many years ago.

VP: Have you ever said “If there’s one thing I’d never do it’s….” and then ended up doing it

VSP: Oh dear, no not really. I think you should try everything at least once.

VP: Now we both like puns, so…. What’s the best Pony Pun you’ve ever heard?

VSP: That ones easy. It’s the one you said to me “To be or not to be, that is equestrian” It kills me, well done AVP!

VP: The Five best pieces of advice you’ve had in life are?

VSP: Whatever career you choose do it for the love of it, you can’t take money to your grave! Although saying that cash is a big help if you like Miu Miu shoes.
Water your plants regularly; they usually die if you don’t.
Look both ways when crossing the road; this will stop you from being run over
Be kind to people, karma is a word for a female dog.
Do not write a rap in middle 8 unless you are prepared to actually rap it live! This will stop public humiliation.

VSP ! She Get’s Our Vote Everytime!