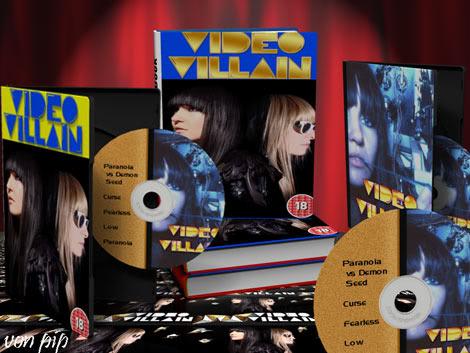 Video Villain is a band that likes alliteration, when we interviewed them last, they were known as Dead Disco and featured one Victoria Hesketh in their number.  After a couple of notable singles namely “Automatic“and “You’re Out” they looked set for big things. Then all went quiet on the Dead Disco front and it slowly transpired that Victoria had left the band to concentrate on what she told us was “a bit of a solo project” called “Little Boots“.  Alas  it seemed that Dead Disco had died a death…

However founding members Lucy and Marie always gave the impression they were two individuals overflowing with creative ideas and artistic endeavour, it was therefore surely only a matter of time before they returned to music. They have now emerged from the ashes of  Dead Disco as the aforementioned Video Villain, creating music every bit as vibrant, innovative and  stylish as anything produced  in their former incarnation   Their skewed sci-fi Goth-pop electronica is the perfect antidote to derivative Indie “bloke rock,” and it’s far darker and way sexier than much of the female led electro that’s being touted as this year’s “big thing.”  Whereas  Elly Jackson from La Roux was probably singing angelically in the school choir, one imagines Lucy and Marie were swigging cider and having a cheeky fag behind the bike sheds… We met up with them again to find out about their latest musical venture

VP:  You’re both former members of Dead Disco, why did you decide to call it a day ?

VIDEO VILLAIN: Although we loved Dead Disco, after a year of label involvement, it became something we didn’t even recognize anymore. So for us, the most exciting thing was to start a fresh, and really think about what we wanted to do, rather than trying a please other people.

VP: Video Villain? Where did the name come from?

VIDEO VILLAIN:  Art and film are very important to us. We’ve always been into sci-fi and B movies, so it just made sense for that genre to be an inspiration for the band. The name Video Villain comes from our love for the bad guys in films. The villains are always much more interesting than the boring good guys!

VP:  What have you released so far and what’s on the agenda in 2009

VIDEO VILLAIN: We haven’t released anything with Video Villain yet, it’ a very new project, it’s only being going properly since Christmas. 2009 is gonna be a busy year though. We’re going to start gigging, and keep writing more music. We have a couple of things in the pipeline, but we don’t want to jinx anything too early so we’re keeping them hush hush for now. (You’ll be the first to know though).

VP:  Apparently the taste makers, and those in the know tell us the futures female and also electro. Do you think 2009 will see a shift in musical taste?

VIDEO VILLAIN: I think the taste makers are always looking for a new spin to get people interested and flog more music. At the end of the day, if you’re a good musician, and you believe in what you do, you should last past the taste makers ‘soup of the day’.

VP: What sort of music influences your sound? Do you both enjoy the same music? Ever had a heated disagreement about, say, the merits of Alphabeat?

VIDEO VILLAIN: We love Nine Inch Nails, David Bowie and Death From Above 1979. We also have a soft spot for commercial hip hop/ rap. Especially Gangstas Paradise and anything by Kelis, Missy Elliot, Andre 3000 and N.E.R.D. On the whole we have scarily similar music taste. Although we have had ‘discussions’ over the merits of Fall Out Boy, and let’s just say that they are on going.

VP:  Do you still produce your own clothing line/ jewellery ?

VIDEO VILLAIN: Yes, we’re actually just making up a new collection for Spring ’09. Art Disco gives us an excuse to give our ears a break and make stuff.

VP: What’s going to be big fashion wise in 2009. Tweed, braces and pocket watches with splash of  post ironic silk ?

VIDEO VILLAIN: We’re loving metal embellishments, leather and feathers, basically anything that makes you look like a character from Mad Max. Although you might have already guessed that from our myspace pic.

VP: If you were offered the chance to work with any artist/producer in the world, who would it be ?

VIDEO VILLAIN: We’d love to work with Trent Reznor, we think he’s as close to a modern day Mozart as you can get.

VP:  Who are your own favourite video villains?

VIDEO VILLAIN: We’re borderline movie geeks so we have a lot of favourites, but we’ve managed to narrow them down to our top 3:

VP: Which musical format do you prefer, CD, vinyl, mp3, etc  and why?

VIDEO VILLAIN: We have a huge collection of vinyl, but to be honest we like anything that you get the artwork with. That’s something we miss with downloading mp3’s, people rarely download a whole album and you’re lucky to get a small picture with it.

(1) Terminator Salvation (better not be as rubbish as Terminator 3, we got up and left the cinema in disgust).

(2) Sarah Beany back on the telly, this credit crunch sucks… no one’s buying houses.

(3) The pound to get stronger against the dollar again, we can’t get any bargains from American eBay these days.

(5) For us (Video Villain) to start gigging, both in England and abroad.

6 thoughts on “Rise Of The Machines-Video Villain Interview”