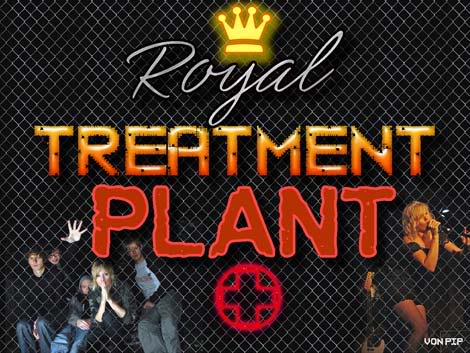 “Hope Is Not Enough” By Royal Treatment Plant

Royal Treatment Plant? Sounds like a place the Queen and her horse featured posse would go for a spot of colonic irrigation doesn’t it?  Lets face it there’s been enough sh*t in the bowels of the House of Windsor over the last few years to improve the nations soil tilth twice over.  But before I go on a republican rant lets get back to the music.  Royal Treatment Plant are a five piece female fronted Indie band from London who mix the honeyed  yet fervent vocals of lead singer Paula Steel  ( Aka Princess P, or PP) with  furious guitars and pounding percussion to staggeringly  good effect.  Their debut album “Hope Is Not Enough” is an eclectic collection of songs that showcases the bands wide stylistic range, influences range from the punk-pop of early Blondie, the bouncing melodies of Belly through to the strident precision of Melissa Auf Du Mar.  However despite the obvious reference points the album does use broad strokes and the band don’t paint themselves in to any particular corner.  Such a varied album could be difficult to pull off but Royal Treatment Planet manage it with some style, it’s diverse yet cohesive and lays the foundations for what could prove to be a very bright future.  Hope may not be enough, but surely Royal Treatment Plant are good enough to make their mark in the shark infested waters of the music industry, we..erm.. hope!

Besides the fab music there also vocalist Paula’s remarkable back-story to pique your interest. When you hear her passion fuelled singing it’s hard to reconcile the fact that she was brought up by a strict religious family who spent their time looking for converts in the wilds of New Guinea!  She seems so rock and roll that it would seem absurd to suggest she could have been brought up on a diet of anything other than Siouxsie Sioux and PJ Harvey? Donning our sleuthing deerstalker and peering through our magnifying glass of truth we set out to find out how you make the leap from preachers daughter to Indie Rock Goddess.

VP:  Legend has it that you were brought up in New Guinea, in a devoted church going family. You studied classical music and weren’t allowed to listen to any new music? So it begs the question how did you get from there, to lead singer with Royal Treatment Plant?

PP: Well I always liked to write tunes on the piano (i.e. think film sound track to queasy romance flick, lots of A minor) and just liked to improvise stuff. I sang in my Dad’s church group ‘The Praise Singers’ as a kid. I was COOL. We weren’t allowed to listen to ‘secular’ music but somehow Dad’s Nana Mouskouri record and a Janis Ian record escaped censorship, go figure. I had to listen to Amy Grant. I remember I bought a single of a pop band when I was about 14 and I got in massive trouble. I had a choice: it was the belt or give the song away, so as I had an aversion to pain AND it was some pop shite I gave the song away. My brother took the belting and kept his ‘Whispering Jack “by Johnny Farnham’ single. He was cool.

VP:  Where did the band name come from?

PP : A friend of mine who taught me guitar and actually played drums for a couple of early gigs with me and DJ came up with it. I liked it immediately as it is a bit of a play on words – Royal treatment (red carpet) and treatment plant (a place for treatment, shite and otherwise…). I kind of imagine this amazing place full of lush grandeur where you go to get treatment for your head when its all too much. Or as my friend says ‘isnt it, like, meaning Posh Poo?’. Posh Poo!

VP:  Tell us the story behind your debut album ‘Hope Is Not Enough’ and a certain ex Blondie producer?

PP : Well there was this guy called Mike Chapman who made Blondie super famous by producing most of their hit records. He found us on myspaassss and messaged us. We thought he was a weirdo crazy man at first as he kept saying how he loved our music etc. then we worked out who he was. He’s actually Australian and when he came to our gig in Manchester Mike and I had Australian accent competitions and he won. His best line was ‘I’m just off to the dunny I suppose a f*ck’s outta the question?’ in a damn dirty Aussie accent. Genius. Oh yeah and he mixed “Hope Is Not Enough” and “Undercurrent” on the album and they sound ACE.

VP:  Does the album title “Hope Is Not Enough” sums up a certain disillusionment with some aspects of the music business.

PP : Not with the music business, just with life. The music business is definitely a place where hope is not enough (and neither is ability or hard work) it’s just a “who you know”, the right contacts, right place right time kinda scene.  But life, man that’s another package all together and one I have trouble getting my head around.

VP: What sort of music would you say influences your sound? Who are your musical points of reference/heroes?

PP: Radiohead is the ultimate for me. Totally incredible. And then there is the Yeah Yeah Yeahs, Metric and TV on the Radio. Direct influences, I am not so sure, I think they weave into my brain and come out in some strange mutated form that I don’t recognise.  We all really like Laura Veirs but how she influences our music? Not sure. Radiohead – did I mention Radiohead? Yeah.

VP:  If you all had to pick an all time favourite album what would it be and why ?

PP: Radiohead’s “In Rainbows“. Just cause its amahhhhhzing.

VP:  Has the internet given creative power to bands or just made labels more cautious about investing in bands.

PP: More creative power to bands? Yes. More access for bands to the masses? Not really. That power lies with the labels that have the right press/radio/TV contacts all sown up that direct the masses to the right online places to find the bands. You don’t make it big without the massive marketing package, any one that tells you otherwise is lying.

PP: Our album “Hope Is Not Enough” is out in Australia in May, its getting some radio play there already which is ace. We were lucky enough to have Universal Records licence it out there as they heard about it from the self release version we did here in he UK. We just recorded 6 new tracks last weekend and hope to finish them soon and do more and have album number 2 sorted. Oh and then there’s the ever helpful day jobs to pay the rent!!! You know, all that exciting stuff, day job, earn the money kinda thing.

VP:  What’s been your most memorable experience being in the band thus far?

PP: Having Mike Chapman in the audience at our gig in Manchester – he said he thought we were great, we thought he must have had ear plugs in!

VP:  And what’s been your weirdest experience

PP: We supported The Sounds in Sunderland a while back, there were 20 people in the audience to see The Sounds (we thought there’d be a lot more as they are quite famous) – they had a tour bus the size of London, brand new Mac laptops and I-pods, were flying out to the USA that night and would barely look at us. They had enough equipment to play to 100,000 people and were very loud…anyway we were slightly offended they didn’t want to be our friends, but we built a bridge and got over it. After the gig as we were packing our car and their roadies were loading their van, this man started reciting poetry on the side of the street. He liked us and wanted to hug DJ and recite poetry. So we listened and thanked him and gave him a hug and drove back to London. And that was our gig with The Sounds.(And I admit, I wrote ‘u suck’ on the side of their bus in the dust – I was jealous of their ‘Rock Bus’.)

VP:  What were the last five songs you listened to on your I-pod?