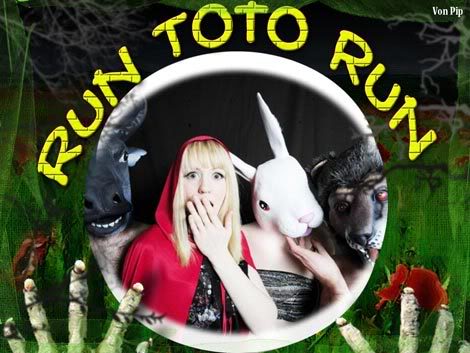 As band names go Run Toto Run is a pretty darn good name. It conjures up imagery of magical places far far away from home, of plucky little characters escaping the clutches of green hued evil doers who are wont to cackle “I’ll get you my pretty”. Yes rather like the movie from which their name derives,  Run Toto Run’s brand of Indie folk-electro pop has that same magical sense of wonderment, and is  full of shimmering understated beauty that manages to be literate, yet whimsical, innocent, yet knowing.   They have garnered support from the likes of 6 music’s Marc Riley, Steve Lamacq and Tom Robinson and their third ever gig was at Glasto last year.  On top of this RTR’s Rachael Kitchenside also runs her own record label “The Lost and Lonely Singles Club” which as well as  self releasing her own sparkly, dreamy musical offerings has also featured music  from the excellent Stickboy .

Run Toto Run have a new single “Plastic Gold” which is released on Monday 8th June with a b-side entitled “Alice” and they’ve also kindly added a cheeky little remix of “Alice” by welsh synth-pop wizard Rod Thomas as a free download for your delight and delectation HERE.    With a tour  from the band planned later in the year, a Guardian photo shoot in the offing, it’s the start of an exciting time for our intrepid friends. We had a chat to Rachael who has been so busy  we caught her considering the moral and logistical implications of cloning herself – (What would Aunt Em say!)

VP: Who are Run Toto Run and how did you all meet up?

RACHAEL: It was through being involved in music in Manchester in various bands, I thought Mike’s dirty blues project the King Street Hobo was excellent so he ended up playing guitar with me when I was going under my own name, Matt was sessioning with half the bands in Manchester, saw Mike and I play a couple of times and knew where we wanted to go and asked if he could get involved and Cazz previously drummed for Stickboy who’s a good friend of mine and we asked her to come and play keys with us.

VP: You release a new single “Plastic Gold” on Monday 8th June would you say you’ve changed direction and gone electro? What’s the song about?

RACHAEL: Yeah we’ve had a real overhaul. I’d been listening to a band called the British Expeditionary Force a lot and asked a sound engineer friend how I’d get similar sounds and he said I’d need shed loads of electronics. When Matt joined he offered to play violin as he’s a professional violin player, I wasn’t really interested in that but when he mentioned he was into electronics my ears pricked up. So we’ve shifted from guitars to keys and synths to sound like bands we admire including folks like the Postal Service, but we still like to mix it up.

Plastic Gold is about not crying over relationships you let pass, the one that got away.

VP: Ok, so the name Run Toto Run must be from The Wizard Of Oz, you’ve done a photoshoot with a  Little Red Riding Hood theme ,  and your record label “The Lost and Lonely Singles Club” has previously released music by Stickboy.  Would it be fair to suggest there’s something of a fairytale theme here, a sense of magic, which is possibly not what most people would immediately associate with Manchester , home of Joy Division, The Smiths etc?

RACHAEL: Yeah we’re a little lighter it’s safe to say. We didn’t want to get too linked in with the name and liked the idea of keeping things a bit whimsical. Stickboy’s a good friend so he’s had a real influence on me especially. He and I recorded “Something to Say” in his living room and mic-ed up the keyhole to get the sound of the wind. We’re a load of romantics. The boys in the band are starting to level me a bit more, it’s losing it’s tweeness a little and I think probably becoming better and more substantive as a result, musically speaking.

VP:  Talking of your label, how difficult is it for an Indie to get off the ground and get noticed these days.

RACHAEL: I think you have to put out records for the love of it, L&L did very well last time round with zero cash, I think people saw the love that was put into the releases and in return gave some back, which was nice.

VP: You played Glasto last year, how did you enjoy it ?  What plans for 2009? Any festivals / gigs coming up?

RACHAEL: It was the absolute highlight of our year, one of our first gigs and we loved it as none of us had seen so many other excellent acts in such as short space of time and we’re all really into watching bands as well as making music.

This year we’re playing the Secret Garden Party and Manchester International Festival with a few more tbc. Glasto have closed a few of the smaller stages this year sadly so we won’t be back just yet.

We’ve got a tour planned in the second week in June too to support the single release, so we’ll be getting about as a band for the first time. We’re really excited; we’ve got iLiKETRAiNS’ lovely splitter van for the occasion.

VP: What have been the most exciting/memorable moments in Run Toto Run’s time together thus far?

RACHAEL: Hmmmmm. It’s been weird. Personally it was getting played by Lamacq with that first track Stickboy and I did and had just popped in the post to him on a whim. I screamed the house down when someone pointed out it had made the playlist. The last tour before Cazz joined was interesting too. We played our very first gigs then ended up doing a session for Tom Robinson in the Hub with George Lamb interviewing the Kaiser Chiefs through the glass. It was a little surreal for us, managerless, clueless and wondering how we’d got there. We also ended up staying in a crack den, one of us accidentally took a pillow from there, got flee bites and it was around that time we penned the legendary song “Crack Den Pillow”. This has not been recorded as of yet

VP:  What sort of music has influenced your sound?

RACHAEL: People like Andrew Bird, Sufjan Stevens, Bat for Lashes, TV on the Radio, Hot Chip, The Postal Service and more recently we’ve been listening to people like Metronomy, Micachu and School of the Seven Bells

RACHAEL: Micachu is someone we all agree on and have been to see several times together.

VP:   Any new artists / bands to keep an ear out from Manchester?

RACHAEL: Everything Everything without a doubt and they make phenomenal videos too. They do things with a song you’d never expect. Dutch Uncles are not new but are one of the best acts in Manchester.

VP: If you had to pick a five word motto for RTR what would it be? “There’s No Place Like Home” perhaps?

RACHAEL: You’ve thrown the curve ball at the end, it’s hard to find something that speaks for us all… right now we’d like to see the world a little so it’s the opposite of our motto, so, from Moonriver “Off to see the world”

The Lost And Lonely Singles Club

“Your Face” By Run Toto Run

0 thoughts on “Over The Rainbow- Run Toto Run Interview”