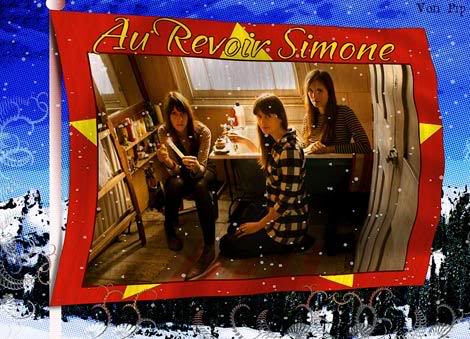 Au Revoir Simone( Erika Spring-Forster, Annie Hart, and Heather D’Angelo) demonstrate just how layered synth music (triple keyboard action!) should work, how it can sound warm, human and emotive. True there is a glacial beauty about their sound but at no point does it ever sound cold, or detached. In the past bands who have employed drum machines and synths as their primary source of instrumentation have been accused of sounding clinical or robotic. Au Revoir Simone could never have this criticism levelled at them. Beneath the electronic frosting they have a passionately beating heart, and their songs celebrate the spirituality of nature, reflect a sense of wonder at the joy of being, and are expertly combined with sweeping synths and wistful, dreamy vocals.

These songs conjure up setting suns, mountain lakes and shimmering star fretted skies.This is music that truly transports the listener to a different place, whether its the halcyon days of those endless sun filled school holidays of yore or the warming glow of Christmas lights through a frosted window on Christmas Eve. There is without doubt a TS Eliot type quality to the”feel of the music. ”In a sense “the music sounds visual” (listen to the music, close your eyes, and you`ll get what I mean) You can certainly understand why somebody like David Lynch is apparently such a fan.

But its not all hypnotic, ethereal beauty and celestial voices, they can lay down some seriously danceable pop tunes too.Their latest album“The Bird Of Music “ showcases this diversity and proves that they really are the aural equivalent of the “Aurora Borealis”.

VP: How did the three of you meet?

Annie: Erika played in my boyfriend’s band, Dirty On Purpose, and one day we were taking a train home together from a weekend in New England with friends and really hit it off. We wanted to make an all keyboard band for no particular reason other than we really like keyboards. Heather came to practice soon after hearing about the idea and our band was born.

VP: Where did the name ” Au Revoir Simone” come from, what particularly appealed to you all about it?

Annie: It comes from Pee-Wee’s Big Adventure, which is one of those films that you’ve watched so much it starts forming your personality. It sounds romantic and alludes to following one’s dreams and hopes, but is also essentially dorky.

VP: Your currently touring at the moment. What are the best things and the worst things about touring? Do you have a tour rider that would put Aerosmith to shame?

Annie: The best thing about touring is getting to play every night, which we adore, especially meeting our sweet fans. The worst part is not getting much sleep, which I desperately crave. As for our rider, we’ve got an anti-oxidant-packed bunch of fruit, vegetables, dark chocolate, tea, and red wine, along with a wish for world peace. I don’t know what Aerosmith likes to eat or hope for. (That’s probably for the best

VP: What sort of things inspires you to write your songs. What’s the process?

Annie: Solo motion and movement usually gets my brain moving, like on a bike ride or a long walk. I usually get into a state where I start singing aloud to myself and some things are good enough to bring to practice and some I just forget.

Annie: I think the music scene has always been creative and awash with originality and I am grateful to be part of it.

VP: I’ve read that David Lynch is your best friend. What’s all that about then?

Annie: David is a really great person and a vocal fan of our band, which we find completely flattering and a complete honour.

VP: Over here in the UK, we feel rather embarrassed that Simon Cowell is behind the global conspiracy to stop musical creativity, and to control every aspect of Pop. What do you make of this “American Idol/Pop Idol “nonsense?

Annie: I’ve never heard of this global conspiracy to stop musical creativity. But people should feel free to be themselves and listen to their hearts instead of a T.V. show. If a judge on T.V. is making you stop being creative, you should probably stop watching so much T.V. and spend more time playing music. It’s way more fun.

VP: August and September appear to be taken up with touring NorthAmerica/Canada, what’s the plan after that?

Annie: We’re going to be opening up for AIR in Europe in November. We are quite excited about that.

VP: Sum up yourselves using only five words?