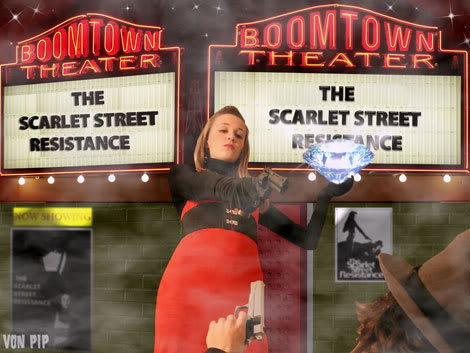 “There’s no such thing as courage. There’s only fear, the fear of getting hurt and the fear of dying. That’s why human beings live so long…..”

In a pawnshop doorway of a dimly lit street the faint form of a shadowy figure could be discerned. He wore an overcoat with the collar turned up and the rim of his fedora was pulled down over his eyes. Under his pencil thin moustache lurked a sardonic smirk. He was evidently waiting for somebody, but who and more to the point why? In a city like this there were plenty of old scores to be settled and debts to be paid. Was he waiting for the dame who’d torn out his heart and sliced it up into tiny pieces, the dame who’d then pummelled it into a fine pâté, which she had then served up as canapés to her high society friends accompanied by her famous “screw you” salad…. Was it the matter of the 50 gees she’d made off with which was owed to Fingers O’Rourke? Nobody stayed breathing too long if they owed Fingers cash, his henchmen shot first and asked questions later… The stranger slipped his hand in his pocket and felt the cold hard steel of the object concealed within his overcoat. He smiled…everything was in place. …. 100 yards from where this shadowy figure was concealed, the doors of the jazz club opened spilling out revellers as the sound of Duke Ellington broke the stillness of the night. Moments later a couple emerged from the club into the cold night air, a female, tall, elegant, entrancing, followed by a male, a guy who looked like he’d been through the mill and had lived to tell the tale. Out of habit he scanned the street, his eyes looking for something, anything, that might spell danger, something didn’t seem right “Scarlet, wait!!” he shouted. She threw back her head and laughed and walked on “Come on Mr Jones” she whispered “let’s get the hell outta here” …The sound of stilettos on the hard concrete of the sidewalk alerted the stranger in the doorway to the fact that finally the moment he’d been waiting for was imminent ..Their paths were about to cross. It was something he had been planning for a long time, something that had filled his every waking hour, some may have called it obsession, he called it dedication…and now…at last…….. In one swift movement he stepped out of the shadows blocking the path of the female, “So” he drawled, “we meet at last”. “Indeed we do” she replied coolly, hands on hips. “And what exactly is it that you want?” she said as a playful smile danced across her lips. “I think you know exactly what I want” he replied meeting her gaze. Her eyes widened as the stranger quickly reached inside his overcoat and produced a….huge.. microphone !… “I want an interview Miss Scarlet, an interview for The VPME , and I want it now! ” …”I think we can work something out” she replied smiling as she lit a cigarette and slowly exhaled, blowing smoke into his face….“Now just wait a second Scarlet” said the guy she’d referred to as Mr Jones “You know when you start talkin’ it opens the doors to a whole world of trouble” . Mr Jones took a step forward towards the stranger “You got something to say mister, you talk to me….”

Well that’s how a Film Noir type interview should start is it not? You couldn’t really meet up with The Scarlet Street Resistance in a local kebab shop could you? But who are they? What’s the deal ? …The Scarlet Street Resistance is a moody musical partnership, which features Scarlet and Mr Jones, it’s described as “part electronica and part folk piano”. With Portishead style beats, fat synths, Tori Amos influenced pianos, plus Bond movie orchestration all set against a backdrop of the shady world of 1940’s Hollywood Film Noir complete with all the moral ambiguity, sexual motivation, glamour, mystery and theatrics you’d expect from that genre. It really is an exciting concept packed with drama, atmosphere, menace and vocals to (maybe literally ;)) die for…

VP: Who are the Scarlet Street resistance?

MR JONES: The Scarlet Street Resistance is an intimate partnership lead as always by our Scarlet. In life it is important to keep your friends close but your enemies closer …Never take your eye off the ball… and always expect the quiet ones to be the most extreme. This is how it all started for us… and it remains that way to this day. I’m sorry for being a little obscure, but I think that explains it quite well.

MR JONES: She’s a dark horse in many ways, and does a good job of keeping herself to herself, but I think Scarlet is a real sweetheart deep down. I haven’t seen a great deal of evidence first hand of her kind heart but I know it’s there. In the past I have got myself into trouble with her for speaking with the media on the subject of our potential past affairs… so I try not to. I have a lot of time for her indeed. She’s been through the wringer that I know. I’m there for her… what can I say…she’s a dangerous lady… take a look at her!

VP: I’ve heard the live shows are amazing what can people expect?

MR JONES:It’s light and dark, up and down, rough and smooth… Scarlet’s presence on stage is really something to behold as you will see. All the gigs this year have been rammed with a wall to wall TSSR type of magma that seems to have a life of its own! The crowd is generally as well behaved as frenzy can be… but there will be a lot less bruising if you just expect amazing.

VP: When will the album “The Big Steal” be released?

MR JONES: Whaaaat…? They’re gonna just release it…? I wanted to hold it to ransom! We’ll see about that…..keep your eyes peeled for this later in the year.

VP: What do you have planned for 2008, album release then tour? Europe? Can Miss Scarlet access a passport these days?

MR JONES: Scarlet has many passports so that’s no concern at all, but all the rest is exactly what is in store for us. I’d like to be doing as much touring as possible because it keeps us on the straight and narrow. We really need to be kept busy as falling into trouble comes a little too easily for us. Scarlet doesn’t twiddle her thumbs for very long! We kick things off in Germany, Scandinavia, Italy, Switzerland and the wonderful Paris all before the summer, then its festival season for a few months. We start what we are calling at the moment ‘our special show’ titled ‘The Sonic Film Noir Show’ which is a full on 1 hour almost cabaret performance including the visuals you see on the internet along with guns and action. The first of these specials is at the Hanbury Club, Brighton, UK on the 24th April 2008. Not the normal gig, more of an experience shall we say, a first for us.

VP: What sort of music has influenced your style?

MR JONES: The Guns of Navarone, I Shot the Sheriff, Pachelbel’s Canon, and Bullet in a Bible, Street Fighting Man.

VP: Which would you both say are your favourite examples of “Film Noir?”

VP: Who would you say are the ultimate femme fatales?

MR JONES: Cat woman… Bodacca… Flipper … and Princess Lea, except she doesn’t die, but she looks like a go-er.

VP: What have been your highlights of your time together so far? The Secret Garden Party festival? Huw Stephens? Finishing the album ?

MR JONES: The Secret Garden Party gig was wicked. I wasn’t sure if we’d be ready for it but in the end we all rose to the occasion and everyone had a top time… lots of smiling faces in the audience, with no-one really knowing what to expect… as far as I could see the crowd was bowled over. finishing the album was great as its been a long time in the making but I’m looking forward to playing more live shows in Europe.

VP: The Video for “Nasty Thoughts” is fantastic and has some really “Wow” moments . Will the story via video continue in the future

MR JONES: If it doesn’t, then the full extent of our whole endeavour together will never be known. It’s a very colourful tale in full, and like all good stories it’s quite natural to want to know what happens in the end. I hope we get chance to tell all in the future via film / video.

VP: What five items are essential to the Scarlet Street Resistance